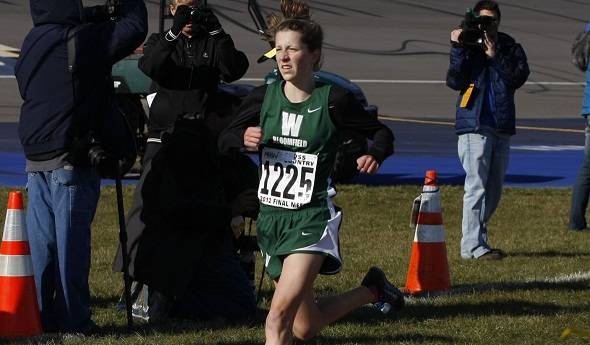 Success comes so easily for some great athletes that they take it for granted.

West Bloomfield senior Erin Finn has experienced enough adversity in her running career that she appreciates each and every accomplishment.

Finn’s freshman year in cross country and track was cut short by stress fractures. So one of the greatest distance stars ever to come out of Michigan remained under wraps until 10th grade, when she placed fourth at the MHSAA Lower Peninsula Division 1 meet in cross country and second in the 3,200-meter run in track.

She went on to win the MHSAA cross country title as a junior in 2011 before setting the all-class/division record for with her time of 10:17.86 in the 2012 Track Finals.

Finn entered her senior year brimming with confidence, hoping to enhance her reputation as one of the state’s all-time greats.

Instead, she endured one frustrating performance after another. The worst part was nobody could understand why Finn was regressing.

Finally, one month before the state cross country meet, Finn was diagnosed with an iron deficiency that was correctable primarily through supplements but also by getting more meat in her diet.

“My parents cook meat really poorly,” she said. “Really, like leather. I started doing some more of the cooking.”

She got stronger in the final weeks of the season, peaking with a personal-best 17:07.9 that dominated the Division 1 Final meet by 26.6 seconds. It was the fourth-best time ever by a girl in an MHSAA final since Michigan International Speedway began hosting in 1996.

“My freshman year, I got stress fractures,” recalled Finn, who receives a Second Half High 5 this week. “I kind of went crazy, because I was a little too underweight from running too much. I

Finn sustained her only loss of the year to two-time Division 2 champion Julia Bos of Grand Rapids Christian, by 15 seconds at the Spartan Invitational on Sept. 14. That’s when Finn began to wonder what was wrong with her.

“I ended up getting a fever the next day,” Finn said. “At first I thought it was over-hydration. Then I thought it was being sick. Then I had worse and worse races. I didn't train this hard this summer to get slower and slower. I’m doing everything right. I’m finally getting to bed early this year.”

When her problem was pinpointed in early October, Finn established a mindset that nothing mattered until MIS. After failing to break 18 minutes in three straight races before the diagnosis, Finn ran 17:47.1 in her final conference meet and 17:50.8 in the Regional before running her personal best Saturday.

“I’m definitely getting back there,” Finn said. “God has blessed me. I don’t think I ever prayed so much before a race.”

Finn joked that her goal prior to her senior year was to make people ask, “Who is Megan Goethals?”

Goethals is considered the greatest distance runner Michigan has produced, having run the only sub-17 time by a girl in an MHSAA Final as a senior at Rochester in 2009.

And back in the pack at MIS are runners who undoubtedly look up to Erin Finn.

These are the glory days of girls distance running in Michigan. Finn’s name is in the conversation with the very best. Of the top 15 times ever run at MIS, 14 have been run during the last five years by girls who have helped the state make an impact at the national level.

Finn shattered the national high school indoor record in the 5,000 meters last March with a time of 16:19.69 in the New Balance Nationals Indoor in New York.

She took second in the national Foot Locker cross country meet last year after placing seventh as a sophomore.

“I hope to follow in Megan’s footsteps by placing so well in nationals, both in high school and in college,” Finn said. “There are so many other wonderful runners. I’m so excited to run at Michigan next year. I was at Big Tens. I was never so excited to be at a cross country race. It was so much fun to see the girls who are going to be your teammates perform so well.”

In her final cross country meet for West Bloomfield, Finn let speedster Hannah Meier of Grosse Pointe South set the early pace before taking the lead one kilometer in and never looking back.


After reaching the finish line with a second straight MHSAA title, Finn was greeted by at least a half dozen reporters.

“Wow!” she exclaimed. “I never felt so cool before with all these cameras and stuff.”

The way Finn is running, she’d better get used to it.