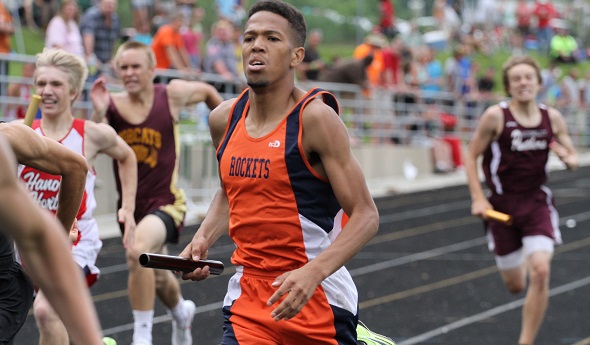 By Geoff Mott
Special to Second Half

First he won the 400-meter dash title in 48.59 seconds, a mark he thought was well short of the LP Division 3 meet record.

“Coach had told me that 47.9 was the record, and when I got that time, I was pretty disappointed,” Burnett said. “Then I’m getting my medal, and I found out that I set the record.”

And then Burnett found out the Rockets had captured their first-ever team title in track and field.

“The individual medals feel great, but nothing is better than winning that team title,” said Burnett, who immediately celebrated with family that numbered more than 10, including his sister from Texas.

Kelloggsville coach Tom DeGennaro has coached for 27 years, including the last three with the Rockets. It’s his first MHSAA title and a gratifying one at that.

“This group is special and full of outstanding kids,” DeGennaro said. “I can think of a lot of kids over the years that have helped build into this. But these kids are just awesome. They are gifted, but they also have great attitudes.”

DeGennaro pointed to athletes like Dionte Williams, who finished fourth in the 800 and ran legs for both relay title teams.

“He’s capable of competing in anything,” DeGennaro said. “He filled in for an injured kid in the 400 relay. He competed in the long jump this year.”

DeGennaro also was pleased to see Burnett come out on top.

“I saw something special in him the moment I took over the team,” DeGennaro said. “This has been a wonderful four-year journey for him. He’s a bulldog on the track and in the classroom, where he’s a 4.0 student.”

After a second-place finish in the 1,600 run last year, Mason County Central junior Chase Barnett wasn’t coming home without hardware this year. He won the race with a 4:15.97 finish, then added another win in the 800 run in 1:57.41.

“All the glory to God because I’m feeling pretty blessed right now,” Barnett said. “I really felt stronger this year. There was weird weather that kind of shortened up the season, but we figured out new ways to train and get the job done.

“I put in a lot of miles in the winter for this.”

Barnett brought home three championship medals, anchoring a Mason County Central title in the 3,200 relay – the team crossed with a 7:57.04 finish, nearly 17 seconds better than its qualifying time of 8:14.

Warren Michigan Collegiate senior Teo Redding glanced at the qualifying times heading into Saturday’s 110 hurdles and wasn’t sold on the 15.5-second time that had him seeded 19th in the event.

“I took second last year, and I’ve had better times than that,” Redding said. “Seeing that time made me even more hungry. I’ve been waiting all year for this. I was ready to go.”

“I ran a really clean race,” Redding said. “I took off fast and wanted to leave (the field) as far behind as I could. It still came down to a photo finish.”

Redding, 18, will play football and hopes to run track next year at Bowling Green University.

Morley-Stanwood senior Travis McCuaig claimed back-to-back titles in the high jump, clearing 6-9 to edge Redding. McCuaig finished with three medals on the day, finishing fifth in the 300 hurdles (40.39) and eighth in the 110 hurdles (15.95).

“It’s funny because I’ve been down in the high jump and I changed some things this week,” McCuaig said. “I’m a power jumper, not a speed jumper. I’ve found I was running too hard and running into the pole. So I slowed it down today and got 6-7 on my first jump.

“Then Redding hit 6-8 on his first attempt, and I thought I was in trouble. I finally got it on my last attempt and then nailed 6-9 on my first attempt. I peaked at the right time this week.”

The 100 meter dash was decided by one hundredth of a second, and the third-place finisher was just three hundredths of a second from the top spot. In fact, one tenth of a second is all that separated the winner from fifth place.

“Once I hit 50 meters, my long strides started to kick in,” said Champion, who placed eighth in the event last year and was seeded 22nd heading into Saturday. “I just had to give it my all because I knew this race was very competitive. There was a little pressure.”

The most interesting title went to Watervliet senior Jake Cowsert, who won the long jump with a 21-foot-1½ inch leap. He edged Pewamo-Westphalia’s Andy Pung by a half inch.

Cowsert didn’t compete in track and field until this season. After setting the long jump school record in middle school, all Cowsert wanted to do this year was set the high school record in the event and continue playing with the baseball team.

While his baseball team competed in Districts, Cowsert found a way to win a Finals championship.

“This is unbelievable,” said Cowsert, who’ll play football at Olivet College. “Our school doesn’t like us to compete in multiple sports in a season, but I really wanted the record.

“I didn’t even know what it took to win a state title or what the marks were. I broke the school record in the fourth meet of the season and just kept going. I graduated last night, and now I’m a state champion. Unbelievable.”

Bath senior Jeff Dempsey improved his pole vault by nearly a foot, winning the event with a 14-foot, 7-inich vault after qualifying with a 13-9 in the event. He finished third in 2012.

“I couldn’t be happier right now,” said Dempsey, who next heads to Pensacola Christian College (Fla.) to major in pastoral studies. The school doesn’t have pole vault. “It’s a great way to end a career. It feels great for the personal accomplishment, but I love for God. He gets the glory.”

Dempsey also credited pole vault coach Jerry Sessions from Maple Valley. Dempsey started training with the coach as a sophomore, improving his vault from 12-6 to 14-7.

“He did a tremendous job and gave me a lot of confidence to compete at this level,” Dempsey said. “He brought me a pole that worked very well.”

Niles Brandywine’s Evan Hartman won the discus with an LP Division 3 Finals record of 187-1, while Standish-Sterling’s Clayton Walderzak won the shot put with a toss of 55-2½.

Saginaw Nouvel Catholic Central’s Tyler Hendricks bounced back from horrible injuries a year ago to win the 200 dash in 22.82, while Lansing Catholic’s Rebera Keenan won the 3,200 title in 9:32.46.

PHOTO: Wyoming Kelloggsville won the 800 and 1,600-meter relays on the way to claiming the overall team championship at Comstock Park. (Photo by Jackie Gomez. Click to see more photo coverage from RunMichigan.com.)