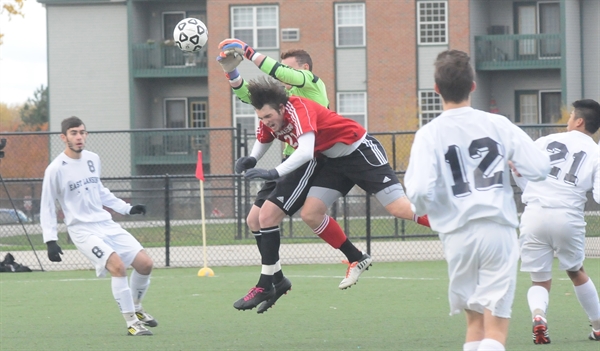 KENTWOOD – Ben Swanson-Ralph was just looking to making something happen, to break the ice.

The senior forward did more than that – scoring what proved to be the game-winning goal late in the first half in East Lansing's 2-0 victory over Spring Lake on Saturday at Crestwood Middle School in the MHSAA Lower Peninsula Division 2 Boys Soccer championship game.

"Out of all the goals I've ever scored in soccer, this was the best," said Swanson-Ralph, an all-stater last year as a junior, who finished his senior season with 15 goals and 12 assists.

"I've always dreamed about playing in the state championship game and scoring a goal, but to actually have it happen, is indescribable. I'll remember it my whole life."

Swanson-Ralph picked up a loose ball about 25 yards in front of the goal, slid past a defender and then skidded a low shot into the right side of the net past Spring Lake keeper Joe Czajka. That tally broke a scoreless tie with 10:19 remaining in the first half.

The goal was critical because, up until that point, the game was progressing according to the plan of upset-minded Spring Lake.

While East Lansing was dominating possession and shots and generally keeping the ball in the Spring Lake end, the Trojans had been unable to break through. The defensive-oriented Lakers, like a boxer that allows his opponent to wear himself out, would have loved to go into halftime with a scoreless tie at cold and windy Pat Patterson Field.

Instead, Swanson-Ralph's goal gave his team the cushion and confidence it needed to open up its high-octane offensive attack, according to 38th-year coach Nick Archer. 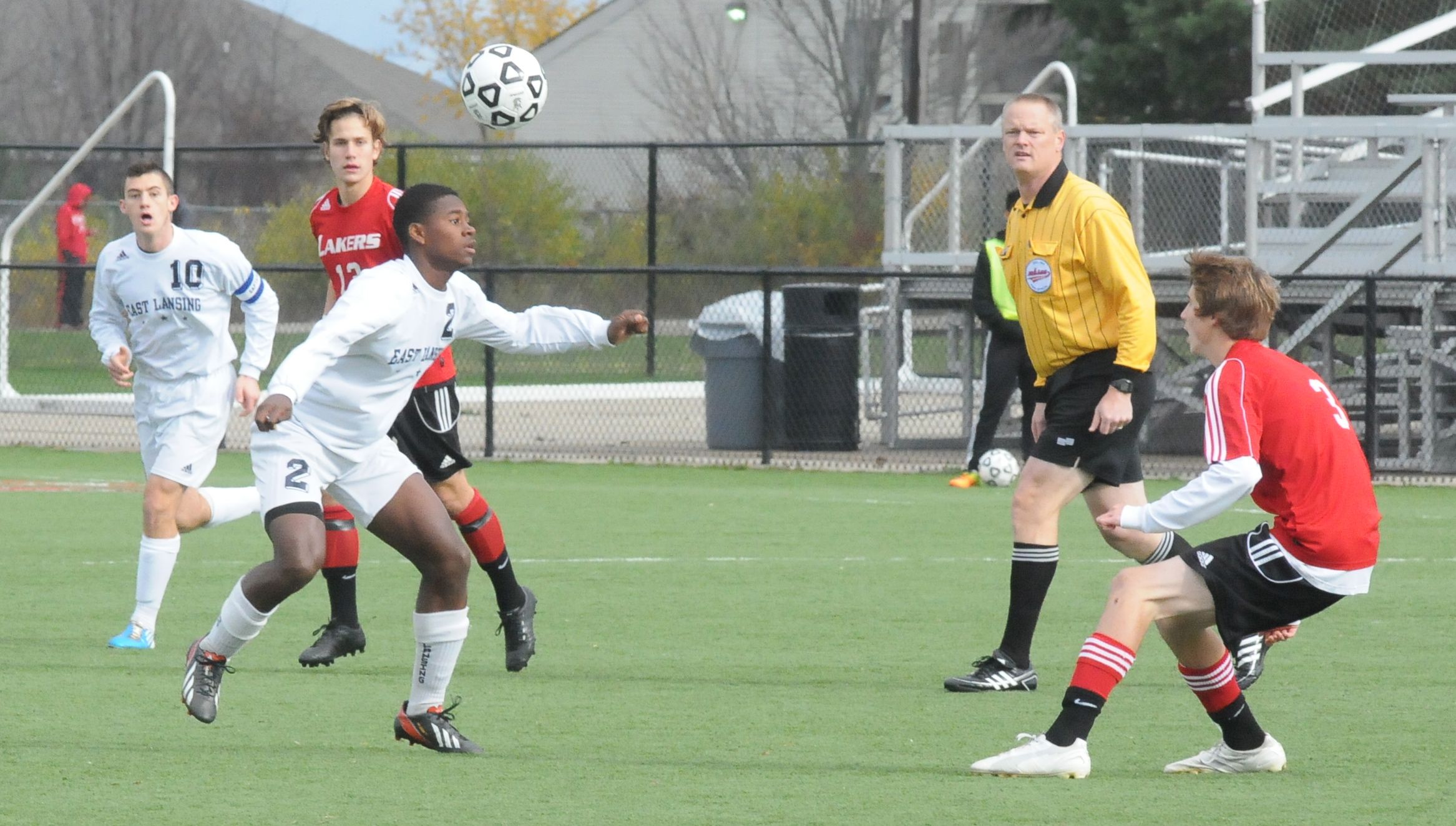 "I am so proud of these kids," said Archer, whose team outscored its seven postseason opponents by a combined score of 22-1, including a 3-0 victory over No. 2 Linden in the Regional Final. "There is so much pressure these days. I just want them to enjoy this moment."

East Lansing, which finished with an 8-3 edge in shots on goal, came out on fire in the second half - with close-range chances by junior DeJuan Jones and sophomore Ian Carroll being stymied by Czajka, the Lakers' last line of defense.

The consistent EL pressure finally broke through again with 33:55 remaining in the game, when Spring Lake was over-aggressive on a corner kick.

The Trojans countered the Lakers' attack as Jones and Carroll broke into the open and then played a give-and-go game up the length of the artificial field in Kentwood. As they approached the goal, Carroll veered into the corner, drawing a defender, and then gave it back to Jones, who punched it into the back of the net. It was the 28th goal of the season for Jones, the Trojans' leading scorer.

"Ian and I hang out a lot and we know what the other one is thinking," said Jones. "We came out in the second half and tried to turn up the pressure and get another goal. It doesn't matter to us who scores; really, we just want to win."

The Lakers had a couple of scoring opportunities the rest of the way, notably from senior striker Nic Ellingboe and sophomore Keegan George. The East Lansing defensive corps of Grant Brogan, Michie Nimsombun, Torey Redmond, Andy Millar and goalkeeper Blair Moore were up to the challenge on each occasion to preserve the lead. Moore had to make just one save.

Spring Lake, which finished 16-7-3, played in its second MHSAA championship game in the past three years under 13th-year head coach Jeremy Thelen. The Lakers fell to Auburn Hills Avondale, 2-1, in the 2011 Final.

This year's Spring Lake team entered the tournament unranked with an underwhelming 10-6-3 record, but gained momentum when it stunned neighboring rival Fruitport, 2-1, in the District Semifinal. Fruitport had defeated Spring Lake twice in the regular season.

"Right now, it's hard for these kids to end with a loss," said Thelen. "But these kids will realize in time what a great season it was, especially since this tournament run was a bit unexpected."