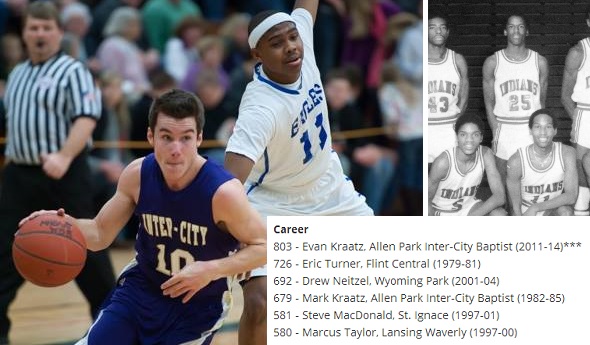 Also one of the all-time assist leaders in MHSAA boys soccer history, Kraatz broke the boys basketball career assists record that had stood since Eric Turner graduated from Flint Central in 1981.

Kraatz finished his career with 803 assists – including 218 this winter – to move to the top of a career list where his father Mark Kraatz (Inter-City Baptist 1982-85) sits fourth. Evan also finished this season with 115 steals – ninth most for one season – to end second on that career list with 358. His dad ranks right behind again, fourth for career steals.

See below for a number of additional recent entries to the MHSAA boys basketball record listings – including a pair from schools no longer in existence – plus a few more for boys soccer and wrestling. Click on the headers to see all entries for those respective sports.