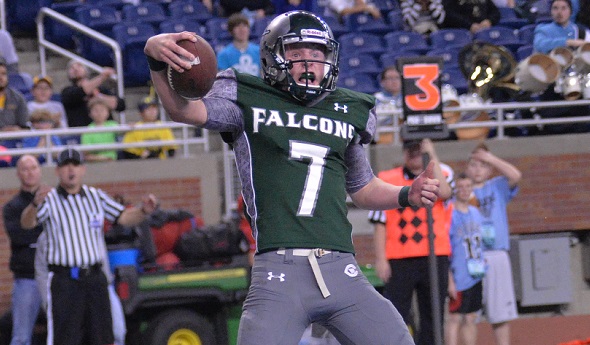 Grand Rapids West Catholic went a combined 34-8 over the last three seasons with back-to-back MHSAA Division 5 championships and a runner-up finish – and quarterback Travis Russell had two of the largest hands in that success.

He threw for at least 2,400 yards and 22 touchdowns all three of those seasons; his career passing yardage of 7,634 ranks fifth in MHSAA history, with his 435 attempts in 2012 second on that single-season list, his 987 career attempts also ranking second, his 224 completions in 2012 ranking seventh and his 546 career completions third on that list.

Russell’s 80 touchdown passes in 43 games tie for third on that career list, and he also ran for 2,269 yards and 32 scores during three full seasons plus four games as a freshman. He has signed with Ferris State University.

Click the football heading below to see the record book in full and read on for more of this week's additions in five sports.