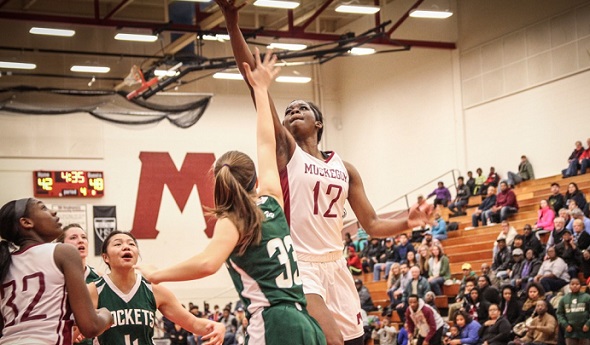 During her four seasons at Muskegon, Cook has contributed at every position and in a variety of ways. Her variety of skills and strength as a leader, in addition to elite talent, all were on display last week during one of the most statistically impressive two-game stretches of a memorable career – earning her the Michigan National Guard “Performance of the Week.”

Cook, a 6-foot point guard who also has played on the wing and in the post for the Big Reds, had 26 points and 22 rebounds as Muskegon came back from a 15-point deficit to defeat East Kentwood 50-47 on Jan. 19. She finished the week with 21 points, 11 rebounds and 11 assists Friday in a 72-27 win over Grand Rapids Union. Muskegon is 8-2 this winter and tied for second in the Ottawa-Kent Conference Black, and 52-28 over her four seasons with two league and one District championship.

She averaged 22 points and 14 rebounds per game as a junior, when she went over 1,000 points for her career. This winter, she’s taken those contributions to another level, averaging 27 points and 16 rebounds per contest. After earning all-state honorable mention as a freshman and sophomore, Cook made the first team last season and is a likely frontrunner for the Miss Basketball Award, which will be given to the state’s top senior in March after a vote by the Basketball Coaches Association of Michigan. Cook has signed to continue her career at Michigan State University and carries a 3.3 grade-point average. She is considering studying sports administration or sports medicine.

Coach Rodney Walker said: “She has taken the needed approach to learning on and off the court. She has accepted the responsibility of being a role model in the community and for future Lady Reds. She has learned how to play all five positions, and that has helped her understand the game. She has owned the responsibility of running our team as the primary point guard. … Mardrekia is one of the most caring, unselfish, and complimentary players for her teammates. And fans watching her play may not understand anything about her humble spirit! I truly believe that she has so much more room to grow. She has not reached her full potential yet. Once she attends Michigan State University, and matures, she will begin to transform into one of the most unbelievable players that we have ever seen in the girls game.”

Performance Point: “I just go out with the mindset of winning, willing to do anything to help my team win. I never really go into a game with a gameplan like, ‘Mardrekia, these games you could drop 50 points.’ A lot of people want me to make a statement and drop 50 – but if you can have 20 points, 22 rebounds, 11 assists, I’ll take that over 50 points. Scoring just shows you can score; that shows you’re an all-around player. I didn’t have any idea that number (of rebounds against East Kentwood) was that high. After the game, our stat keeper came up to me and said I had a monster game. I just like to be all over the place (and) I love to rebound.”

Complete player: Walker noted how Cook combines strong ball handling skills with the ability to get to the basket, but also see the floor and get all of her teammates involved – products of a high basketball IQ. Cook’s favorites of her many skills are her ability to penetrate and rebound. “I’ve always had the strength of going to the hole and finding gaps. And rebounding, I can jump. I don’t even think I boxed out (against East Kentwood). I just out-jumped everybody. I can probably put my wrist over the rim; I’ve gotten a dunk down before.” 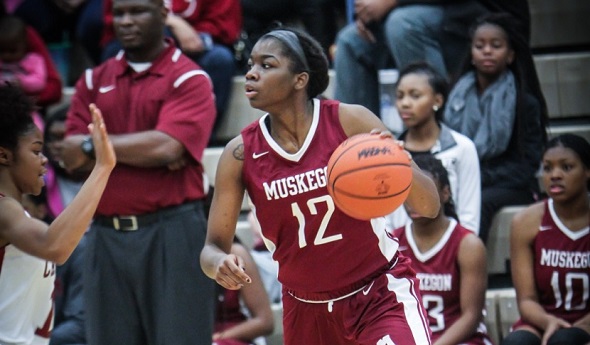 Watching and learning: “When you watch basketball, you observe all the spots. You have to have a high IQ, see the whole floor at times. Stephen Curry, Maya Moore, Kevin Durant … I just love them. I love that Stephen Curry isn’t that big – he’s actually really small – but he’s got so much heart, the definition of heart. Kevin Durant is an all-around player. He can push the point, he can shoot, play inside. And Maya Moore is not human for a girl; she can do everything and she’s won at every level.”

Spartans will: “I just love it there. A lot of people talk about family, but they don’t really mean it. But when I went (to visit MSU) around summer time, everybody – football players, volleyball players, basically every sport – was in the weight room mixed up, pushing together, wanting every sport to dominate.”

Big Reds rising: “I’ve never been so confident in my players. I see us going really far and I would love to play on Michigan State’s floor before I get there. Definitely my goal is to get there. We still have work to do, but I see us getting pretty far.”

PHOTOS: (Top) Muskegon’s Mardrekia Cook finishes a drive against Muskegon Reeths-Puffer. (Below) Cook directs the Big Reds’ offense as point guard, but has played on the wing and post as well during her high school career. (Photos courtesy of the Muskegon girls basketball program.)