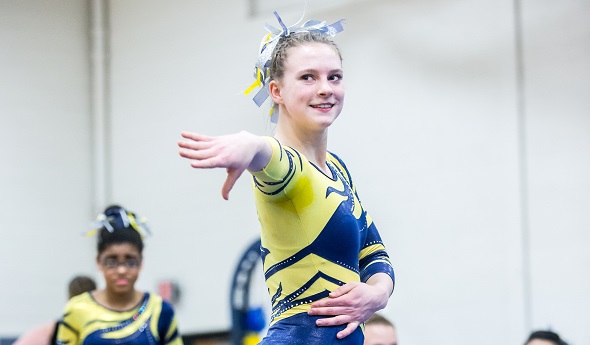 Hogan finished 10th, second (by a tenth of a point) and third in MHSAA Finals Division 1 all-around competitions her first three seasons of high school, respectively, making her a strong favorite to claim the championship heading into this winter. A sprained right ankle before the first meet has slowed her down a bit – but she re-established herself as a top contender by winning Saturday’s Canton Invitational Division 1 championship with an all-around score of 38.225, earning the Michigan National Guard “Performance of the Week.”

The event annually is considered the most competitive of the regular season, featuring most of the best gymnasts from across the state, and Hogan also won Division 1 as a junior. This time, she finished first on vault scoring a 9.7, first on uneven parallel bars at 9.625, won balance beam at 9.5, and finished second on the floor exercise with a 9.4 – despite holding back some of her toughest skills as her ankle continues to heal. Her team as a whole is struggling through injuries and finished sixth.

Hogan has won five individual MHSAA Finals championships during her career – Division 1 vault twice, floor twice and bars once. Adding another next month at Rockford would give the Comets at least one individual Division 1 champion for a 10th straight season, and she’s also going for her school’s ninth Division 1 all-around championship over the last 14 seasons. She was a freshman when Grand Ledge won its sixth straight team championship in 2013, and she scored the top all-around score of last season’s Team Final to help the Comets to third place – a surprising finish because Grand Ledge only qualified for the Final as the top-scoring fourth-place Regional finisher. Hogan also has played the flute since middle school and been part of Grand Ledge’s marching band the last four years. She carries a 3.89 grade-point average and is planning to attend Michigan State University after graduation to study packaging engineering.

Coach Duane Haring said: “She’s a tough little kid. We didn’t let her do much (before Canton); we couldn’t. She’s the one who actually pushed herself to get where she is right now. There are so many athletes I know, and I’ve coached some, who have a little pain and they’re done or go 50 percent. Rachel said, ‘My ankle hurts, but I’m still going to practice and do everything.’ And she is. She has never given up, never ever.”

Performance Point: “As a team, we could’ve done better, but we are all injured right now; I’m definitely not the only person with a sprained ankle. Me personally, it was a really good comeback meet. I think as a team, for that meet, we realized we have to start stepping it up, modifying some of our routines, even if we’re injured so we can get through stuff and get the scores we need.”

‘Tough little kid’: “I think a lot of it comes from a drive. Something has to motivate you. I know my coach motivates me a lot. He’s one of the best coaches I’ve ever had. He puts so much time into us, and we really have to give that back to him somehow. I need to do my best … and that’s for the team, too.” 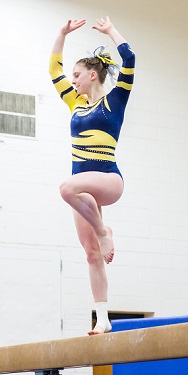 Be the example: “I definitely try to lead by example. I try to be more of a friend to them than a leader, so I can be a person they can talk to, so they can trust me. When they’re struggling with something, they can come to me, and I’ll help them get through that. I hope I’m motivation for them; they see me doing my best, working hard, and they will do that as well. They’re getting there.”

Veteran voice: “I’ve learned to never give up. Because over the years we’ve lost our strongest gymnasts, but the gymnasts we have, we should never give up on them, never think they don’t have potential, because they all do. It’s good to almost expect more out of them than they think, because it gives them that confidence. They’ll do their best things when people aren’t expecting them.”

Next in Comets’ Legacy: “There’s a little bit of pressure that comes with that. Those gymnasts were such good gymnasts. I look up to them a lot. (Coach Haring) always tells us stories about his top gymnasts. It’s always cool to hear how much they accomplished, and you can tell he gets really excited about us doing well. Especially when he’s talking about his past gymnasts, I want him to talk about us to his future gymnasts.”