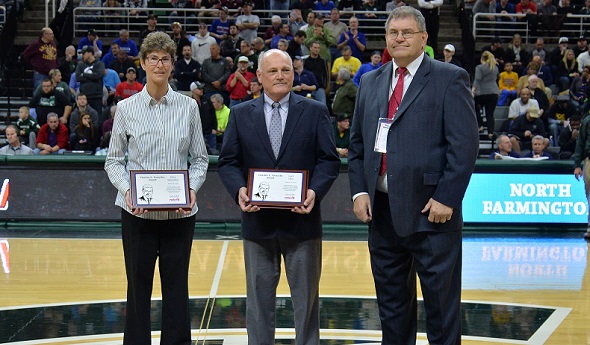 Gary Hice's first job in education was as a study hall monitor. But he also got a chance to coach that year at Charlevoix, and that made all the difference.

"I don't know why I came to love it," Hice said of a career in high school athletics that didn't come to an end until nearly 40 years later. "That first job I had as study hall supervisor was not much fun. But I enjoyed working with kids ... and that spurred me to get into education. I think that's the most awesome animal on the face of the Earth, the high school student."

Gina Mazzolini, meanwhile, was a former high school and college star who came off the court as an athlete but returned almost immediately as a coach before rising to administrator with influence at the statewide and national levels – and a similar passion for giving back to the high school game.

“It’s one of those things where I’ve worked in this position because I loved doing it,” Mazzolini said. “I enjoyed working with the adult coaches and adult officials, and then the student-athletes."

Both have served Michigan high school student-athletes for more than 30 years in ways that will continue to impact schools and athletes for years to come.

In recognition of their efforts, they have been named the 2016 recipients of the Michigan High School Athletic Association’s Charles E. Forsythe Award.

The annual award is in its 39th year and named after former MHSAA Executive Director Charles E. Forsythe, the Association's first full-time and longest-serving chief executive. Forsythe Award recipients are selected each year by the MHSAA Representative Council, based on an individual's outstanding contribution to the interscholastic athletics community. Hice and Mazzolini will receive their honors during the break after the first quarter of the MHSAA Class A Boys Basketball Final on March 26 at the Breslin Student Events Center in East Lansing.

Hice retired in 2014 after 30 years as Petoskey’s athletic director overseeing one of the most successful programs in northern Michigan that regularly produced contenders for championships statewide. Under his leadership, Petoskey added five sports, revamped its facilities and became a founding member of the Big North Conference after Hice contributed to its creation.

Mazzolini has served the MHSAA since 1993 and is the administrator for girls volleyball, swimming and diving, alpine skiing and tennis. She also handles the sanctioning of out-of-state competitions and serves as the MHSAA’s point person on foreign exchange and international student issues. Mazzolini will receive a Citation from the National Federation of State High School Associations this summer and was the 2010 recipient of the MHSAA’s Women in Sports Leadership Award.

“Gary Hice and Gina Mazzolini have contributed to Michigan high school athletics on a variety of levels providing vision, leadership and dedication,” MHSAA Executive Director John E. “Jack” Roberts said. “Gary Hice served as a leader of leaders in northern Michigan and provided an example to be followed statewide, while Gina Mazzolini has shaped rules and policies that have impacted programs not only in our state, but nationally as well. We’re proud to honor Gary Hice and Gina Mazzolini with Forsythe Awards.”

After his year at Charlevoix, Hice taught social studies and physical education and coached for one year at Petoskey before spending five years as director of parks and recreation and harbormaster for the City of Petoskey. He returned to the high school as athletic director in 1984.

Hice is a member of both the Michigan Interscholastic Athletic Administrators Association and National Interscholastic Athletic Administrators Association. He was named state Athletic Director of the Year by the MIAAA in 2011 after receiving its George Lovich Award of Merit in 2008. He also was honored with the MHSAA’s Allen W. Bush Award in 2002 for his often-unseen contributions to high school athletics.

“When you’re in the heat of the battle, you don’t think on those terms,” Hice said of his many contributions and their lasting effects locally and beyond. “But toward the end of my career, I would relish the times when I could help young ADs, new ADs, people who didn’t have a lot of experience. In fact, I miss that today.”

Hice is a longtime member of Kiwanis Clubs, first of Petoskey and currently of Little Traverse Bay, and also has served with the Petoskey Education Foundation, Jeffrey P. Bodzick Memorial Scholarship Foundation and Beyond the Scoreboard initiative that promotes positive character and sportsmanship in northern Michigan’s youth and interscholastic athletics.

After standout basketball and volleyball careers at St. Johns High School and Central Michigan University, Mazzolini taught and coached multiple sports during the 1979-80 school year at Ovid-Elsie High School. She then spent two years teaching and serving as an assistant volleyball coach at Michigan State University, where she also earned her master’s degree in physical education. Mazzolini then left to teach and serve as assistant volleyball coach and interim women’s Sports Information Director at the University of Texas.

In 1982, Mazzolini became an activities director with the University Interscholastic League, the service organization to high school activities in Texas. She became an assistant athletic director at the UIL in 1988, and five years later she returned to Michigan as a member of the MHSAA staff.

"To be recognized by my peers for this award … I’m appreciative and humbled," Mazzolini said. "You do those things because you enjoy them.”

In addition to her work at the MHSAA, Mazzolini has provided a long list of contributions at the national level. She has served as the NFHS representative on the board for the Council on Standards for International Educational Travel, which identifies, promotes and supports international youth exchange programs, and has sat on several CSIET committees. She’s currently serving on the NFHS Annual Meeting Planning Committee and also has served on NFHS rules committees for soccer, swimming and diving, and volleyball (chairing that sport’s rules committee from 2004-08), and on NFHS advisory committees for athletic directors and sports medicine.

She recently was inducted into the Michigan High School Ski Coaches Association Hall of Fame and has served as a voter for the Greater Lansing Sports Hall of Fame.

Mazzolini graduated from St. Johns High School in 1974 after an accomplished career that included leading the Redwings to a District title in the first MHSAA Girls Basketball Tournament in 1973. She went on to star in both basketball and volleyball at CMU; she graduated in 1978 as the leading scorer, rebounder and shot-blocker in CMU history and still ranks among the Chippewas’ leaders in multiple statistical categories. She was inducted into the CMU Athletic Hall of Fame in 1992.

Hice graduated from Ann Arbor Huron High School in 1970. He earned his bachelor’s degree at Eastern Michigan University in 1974 and his master’s at CMU in 1989, and received Certified Athletic Administrator certification from the NIAAA in 1994.