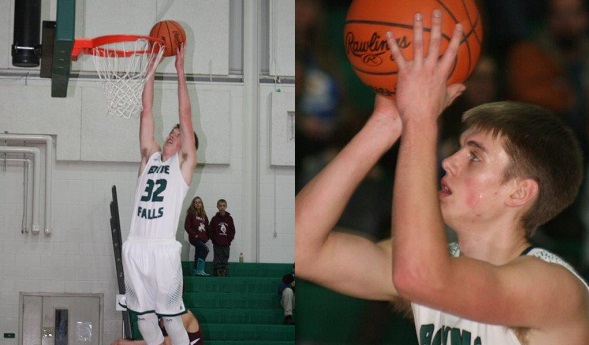 Marcus Matelski finished his brilliant high school basketball career at Boyne Falls this winter among the all-time leaders in MHSAA history in both points and steals.

Matelski’s scoring listings include 24 points in the first quarter of a game against Traverse City Christian on Feb. 1 and 2,421 points for his career – good for ninth-most in MHSAA history and at an average of 28.2 per game. His 425 free throws rank 14th on that career list, and his 80.6-percent success rate from the line sits 12th.

His steal numbers are similarly impressive – he had 12 or more steals in three games this season to rank among the top-five for one contest, and his 146 steals set the single-season record. Matelski’s career steals total of 341 sits fourth, although that will drop one spot when Gage Kreski's record career total at St. Ignace is added next week. Matelski, who will next play at Northern Michigan University, also made the career rebounds list with 838 over 86 games.

Click the “Boys Basketball” heading below for more on the 6-foot-2 guard’s accomplishments and other recent additions to records lists for his sport, and on the other headings for the latest to be added for baseball, girls basketball, hockey and volleyball.

Tyler Waldrop earned a spot on the single-season ERA list for the second straight, improving on his 0.69 ERA as a junior with a 0.50 last spring as a senior as he finished 10-1. His ERA paced Grand Ledge’s team mark of 1.33 as the Comets finished 31-6-1. Waldrop pitches now at Wayne State University.

Shawn Pardee made the MHSAA records in two categories during a 99-85 overtime win over Carrollton on Jan. 25. He scored 20 points during the fourth quarter, making the single-quarter scoring list. Eight that quarter came on free throws, and he made the single-game free throw list with 21 in 23 attempts. He finished the game with 48 points. Millington as a team made the single-game free throw list with 36 that game (in 45 attempts). The Cardinals also made team records listings with 367 free throws this season (in 477 attempts, for a 77 percent success rate), free throws made (415) and attempted (549) in 2014-15 and free throws made (410) and attempted (581) in 2013-14. The 415 makes tied for third-most in a season and the 410 rank fifth, while the 581 attempts rank sixth for one winter.

Joe Duncan’s 25 points in a quarter for Cedarville against Rudyard on Feb. 11, 2015, tied for eighth-most in MHSAA history and included a tied record with 21 of those points coming on seven 3-pointers – he is one of two players to make that many shots from beyond the arc in a quarter. He played this season at Alpena Community College.

North Muskegon had a tough season this winter, but Mya Duncan was sharp in helping the Norsemen to their first victory, Jan. 29 against Scottville Mason County Central. Duncan made all 16 of her free-throw attempts to make the MHSAA records listings for most free throws made in a game and most consecutive in one game. She finished with 24 points in the 57-52 win.

Ellie Mackay’s strong free throw shooting has placed her near the top of multiple MHSAA lists. The Novi sophomore made 17 straight free throws in a 39-26 win over Livonia Stevenson on Feb. 9 – the 17 straight are tied for fourth-most consecutive in one game. She then made 22 of 27 attempts in a 53-46 overtime win over Walled Lake Western on Feb. 19; her made free throws in that game are second-most on the single-game list for that statistic.

Clinton Township Chippewa Valley quarterback Pat Briningstool capped his high school career in the fall with 10 listings in the MHSAA football records. In his final season he threw for 2,375 yards over 10 games, completing 187 of 293 passes including 25 for touchdowns. For his career, he completed 301 of 492 passes over 22 games for 4,226 yards and 52 scores (including 27 as a junior). Teammate Stefan Clairborne made the career receptions list with 102 over four seasons, and kicker Dane Haggarty was added for single-season extra points as a sophomore and junior and for 140 in 145 tries over 33 games from 2013-15 – his total makes rank 11th on that career list and included 80 straight. Previous accomplishments were added for Matt Schweiger (four touchdown catches in a game in 2006, a 97-yard kickoff return for a score in 2005) and KyeRell Williams (a 95-yard kickoff return touchdown in 2008). Briningstool has signed to continue his career this fall at Emporia State University in Kansas, and Claiborne signed with Western Michigan.

Bart Williams quarterbacked Grand Blanc to a 15-8 record over the 2011-12 seasons, posting passing numbers among the best in MHSAA history. His 6,302 passing yards rank 14th despite coming in only 24 games, with his 792 career attempts 11th and 454 completions 10th (while his single-season numbers in both categories rank at least among the top six in each category). He threw 73 touchdown passes, which rank tied for 13th for a career, and his 37 in 13 games as a junior are tied for 14th. Jordan Fields, his leading receiver in 2011, made MHSAA records lists with 67 catches and 1,088 receiving yards in a season. Williams now plays at Grand Valley State University and threw 45 touchdown passes last season; Fields went on to play at Central Michigan University.

Cooper Jenkins became the first player to make the career assists list since 1993, finishing his four-season Pinckney career in 2015 with 132 assists in 109 games after tallying 44 and 45, respectively, over his final two seasons.

Hanah Carter also finished her varsity volleyball career with 945 assists in the fall – and 3,029 over her three years to make the MHSAA career assists list. The senior setter earned Class D all-state honorable mention after her final high school season.

PHOTOS: Marcus Matelski scores some of his more than 2,000 points during a four-season varsity career. (Photos by Rachel Lange.)