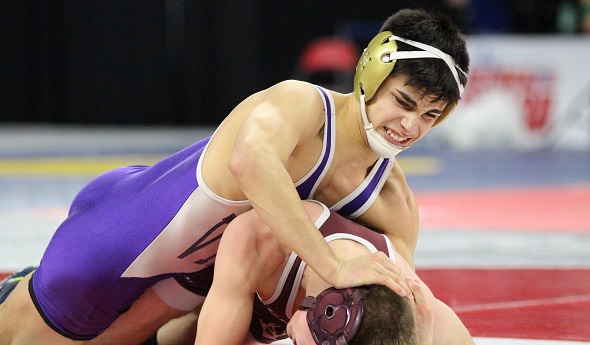 Saginaw Swan Valley’s wrestling program has maintained a standing among Division 3 powerhouses with six Individual Finals champions and a number of standouts over the last decade – and now has 38 entries in the MHSAA record book for the sport.

Wass, both Suitors, Whitney, Santos and Brandel also were added for career pins, and Wass tied for the fastest pin – in 4 seconds – at 125 pounds during one of his victories in 2009. KJ Suitor signed with University of Michigan, while Santos signed with Michigan State University; BJ Suitor wrestled at Boston University, Beebe and Wass at Gardner-Webb in North Carolina, Germaine and Brandel at Eastern Michigan, and Lamson also competed at MSU.

Click for the wrestling record book in full and read on for more of this week’s record additions for boys basketball, boys and girls lacrosse, girls soccer and softball.

Hillman junior guard Gunnar Libby had quite an individual performance in his team’s 67-56 win over Whittemore-Prescott on Dec. 14 – 29 points, five rebounds, six assists and 12 steals. The steals tied for sixth-most in one game in MHSAA history.

Tecumseh freshman Dylan Day enjoyed an excellent start to his career this spring, making the MHSAA records lists both for 65 goals and 92 total points, in 16 games.

Christy Battersby put up one of the most impressive scoring seasons in MHSAA history this spring for Farmington Hills Harrison. The Hawks’ junior scored the second-most goals in one game, 13, in a 20-19 loss to Grosse Pointe North on April 15. She finished the season with 96 goals and 107 points, her goal total tying for sixth-highest in MHSAA history.

Five DeWitt players made the MHSAA records lists this season, led by junior Rachel Madar’s five entries – three for single-game goals (eight, eight and seven), 80 goals over the entire season and 95 points total this spring. Junior Jordan Markowski was added for 65 goals, five assists in one game and 100 total points. Sophomore goalie Chase Terwilliger had 19 saves in a 13-11 win over Grand Rapids Christian and 182 saves on the season. Junior Adison Salisbury was added for six assists in an 18-10 win over Swartz Creek, and junior Sierra Dietz also made the single-season goals list with 53.

Belleville’s Morgan Marshall added 27 goals this spring after making the MHSAA record book with 36 as a junior to finish her four-season varsity career with 104 goals, which also made the records listings. Marshall has signed with Spring Arbor University.

New Lothrop set an MHSAA single-season record with 276 stolen bases over 34 games this spring, led by Alayna Mantei – who had 88 stolen bases to finish with the second-most ever among individuals. The Hornets also were added for 85 doubles – led by 17 by Maddie Bitterman – .409 team batting average and 249 RBI. Bitterman was a senior and Mantei a junior this season.

Vassar’s Samantha Taylor made the record book with six RBI in a 22-6 win over Bay City All Saints on May 3. Taylor was 3 for 6 with two doubles in the game.

Niles Brandywine senior Makenna Hartline entered the record listings with 13 home runs over 35 games this season in helping her team to a District title. Hartline will play next season at Trine University.

Jordyn Look finished off a fine four-season varsity career for Tawas with 209 hits and 58 doubles, which both made career lists in those categories – the doubles are tied for 13th most. Teammate Abbie Anderson, also a senior, made the records with back-to-back home runs in a 17-3 win over Mio on May 21 and a record-setting seven RBI in one inning – she had a three-run homer and grand slam in the first.

PHOTO: Saginaw Swan Valley’s KJ Suitor works toward a win in his first-round match at this past season’s MHSAA Individual Finals. (Click to see more from HighSchoolSportsScene.com.)