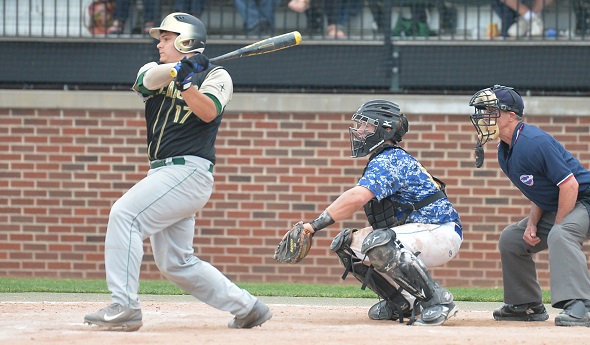 Muskegon Catholic Central’s runs to the 2015 Division 4 baseball championship and 2016 Quarterfinals relied for obvious reasons on the ability to limit opponents’ hits – but also to take them.

In addition, MCC was added to the MHSAA record book for a 1.13 team ERA and 161 stolen bases during the 2015 title run. Nicholas Holt, a senior on that team and Jacob’s brother, finished his pitching career 37-3 to make the career wins list and won 28 straight games over his final three seasons to tie for third on the list for consecutive pitching victories. Also, teammate Anthony Woodard was added for scoring 65 runs in 2015.

Nicholas Holt played this spring at Hope College, and Jacob is playing at Aquinas College. Woodard is playing at Benedictine University in Illinois.

See below for more recent record book additions, and click the headings to see those sports’ record books in full.

Homer’s Brock Ridgeway finished his four-year varsity career this spring on MHSAA career lists for runs scored (163), hits (184), RBI (142) and being hit by pitches (47) after being hit by 18 pitches this past season and three times in one April game. The 47 career HBP is tied for fourth-most all-time, and he also just missed the career pitching wins list with 32. Homer as a team this spring made season lists with a .354 batting average and 53 HBPs. Ridgeway is a freshman on the Central Michigan University baseball team.

A pair of senior pitching aces from the 2008 Grass Lake team that finished 34-6 and won the Division 3 championship were added for performances that season. Charlie Fisher made the ERA list at 0.96 and also had seven shutouts that spring to make the list in that category. Casey Hall was added for his 0.57 ERA. Grass Lake as a team ranks fourth for its 354 strikeouts that season. Hall went on to play at Western Michigan University and Fisher played at Hillsdale College.

Jordan Weber knocked down 73 3-pointers last season for East Jordan to finish his four-year varsity career with 278 – fifth-most in MHSAA history. He made nearly 34 percent of his 818 career attempts and averaged 17.1 points per game total as a senior.

A pair of Gaylord athletes were entered for impressive scores more than 30 years ago. Kurt Kakaviska made the records for his 90-yard punt return touchdown against Petoskey in 1982, while Mark Johnston was added for two interception touchdowns in one quarter in a 1986 game, also against Petoskey. Johnston actually scored a third defensive touchdown in that same third quarter, on a fumble recovery. Kakaviska went on to play at Northern Michigan University.

Cody Richardson played a significant part in Athens’ 12-0 shutout of Bellevue in the teams’ opener Aug. 26. Richardson, a junior, had four interceptions to tie for fourth-most in one game.

Grosse Pointe South's Grace Foster picked up her first record book listing as a sophomore this spring, hitting 19 doubles in 35 games. She hit .500 for the season.

Kennedy Kunnert joined the list of those who have hit back-to-back home runs, drilling hers out of the park for Pinckney in the first and second innings of a 12-5 loss to Hartland on May 11. Kunnert was a junior this spring.

Hastings coach Mike Goggins joined the group with more than 400 coaching wins last season, moving to 415-137 since taking over the program at the start of the 1998-99 season. His team finished 26-11 last winter with league and District championships.