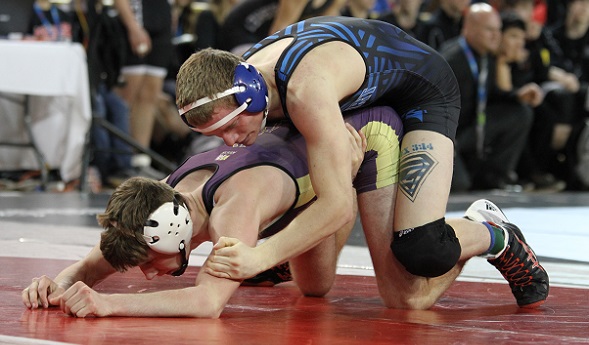 Contenders with a combined 21 appearances in MHSAA individual title matches return to the Division 4 Finals this weekend.

Eight are reigning champions, including one who won in Division 3 last season before his team was reclassified into this bracket.

Ten of those finalists past are discussed below – but with a group this deep, don’t be surprised if the 14 champions we highlight at the end of this weekend differ significantly.

Follow all matches on a subscription basis live on MHSAA.tv, and click here for results at MHSAA.com. And come back to Second Half late Saturday and Sunday as we’ll interview all 14 title winners.

112: Noah Comar, Clinton sophomore (47-0) – After finishing runner-up to Hudson’s Jordan Hamdan last season, he might run into another Tigers contender this time – but as the top seed coming in.

112: Tucker Scholl, Hudson sophomore (30-2) – He’s the second seed at this weight to Comar after claiming the championship at 103 last winter by major decision.

119: Spencer Good, Jackson Lumen Christi senior (37-7) – Good finds himself in a tough bracket with a Division 4 champion from last season, but he was a Division 3 champion claiming the 112 title with a 6-3 decision in 2016.

119: Jordan Hamdan, Hudson sophomore (44-2) – He’s that returning champion noted above, after winning the 112 title a year ago; Hamdan is the top seed at this weight.

130: Robert Rogers, Burton Bentley junior (39-1) – Coming off Bentley’s first MHSAA individual title in 39 years, at 125, Rogers is looking to add a second straight this weekend entering with a combined record of 87-1 as a sophomore and junior.

140: Sean O’Hearon, Springport senior (38-0) – O’Hearon improved from a fourth place as a sophomore to win 135 last season and enters this weekend a combined 87-1 over the last two winters.

152: Gerrit Yates, Hesperia junior (33-1) – He finished runner-up at 135 as a freshman and 145 last season, but enters this weekend as the top seed at this weight and one of only four in the bracket with three or fewer losses this winter.

189: Erik Birchmeier, New Lothrop senior (28-2) – Last season’s champion at 171 earned that title with one of the most dramatic finishes of the 2016 Finals, coming back from a 5-2 deficit to start the third period to win 7-5 in overtime.

215: Nick Cooper, Springport senior (37-3) – The champion last season at 189, Cooper will try to graduate with a second title and the fifth for his family (brother Nick won three); he’s unseeded but 78-4 combined over the last two seasons and also was a runner-up as a sophomore.

PHOTO: Springport’s Sean O’Hearon (top) works toward a major decision during his team’s Division 4 Quarterfinal on Friday at McGuirk Arena. (Click to see more at HighSchoolSportsScene.com.)