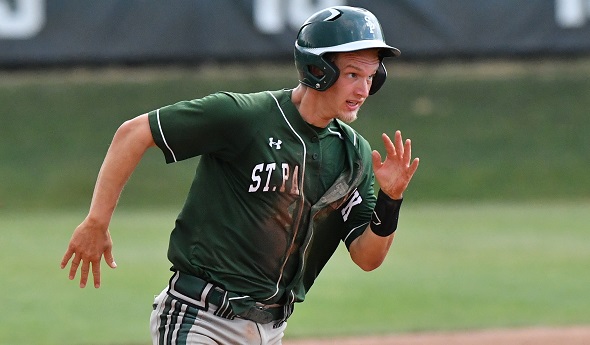 Portland St. Patrick’s run to the Division 4 baseball title this spring was fueled by its ability to manufacture runs – and some of those statistical performances will be remembered among the best achieved in MHSAA history.

As a team, Portland St. Patrick was hit by 46 pitches over 38 games and also stole 170 bases to make those team record book lists. Senior Brendan Schrauben – who is continuing his career at Alma College – capped his four-season varsity career with 168 runs scored, and Graham Smith finished his with 46 hit-by-pitches – good to tie for sixth on that list.

See below for more recent record book entries in baseball, football, girls lacrosse and softball, and click on the sport headings to see those record books in full.

Homer’s 36-6 finish in 2017 was the result of a number of record book-worthy performances. Offensively, the Trojans hit .359 with 380 runs scored, 88 doubles and 310 RBI, which all made team lists, plus their pitchers totaled 308 strikeouts. Now-senior Kyle Klepper was added for hitting two home runs in the first inning against Manchester on May 13, and Joe Roth – also now a senior – was added for a 1.69 career ERA over 132 2/3 innings pitched the last two seasons. Coach Scott Salow was added to the coaching wins list; he’s 507-152 having coached Taylor Light & Life in 1993 and 1994 and at Homer since 2001.

Hudson’s 2000 team finished 9-3 on the strength of a rushing attack that now sits atop the season rushing attempts (601) and yardage (4,196) lists. Three running backs rushed for at least 1,000 yards for the Tigers. Hudson ran for a season-high 476 yards against Dundee and for at least 440 yards in two more games.

Richmond’s Anthony Tavano got on the single-game receiving touchdowns list with four thrown from quarterback Chase Churchill in a 57-7 win over Armada on Sept. 1, 2016. Tavano played this season at University of Mount Union in Ohio.

Muskegon Catholic Central’s Tommy Scott made a series of scoring lists in helping the Crusaders to a perfect season in 2014. Scott scored 216 points on 36 touchdowns, including 34 rushing touchdowns. All three totals made MHSAA record lists, and his 99-yard kickoff return against Munising in the Division 8 championship game tied the longest in MHSAA history. In addition, teammate Nate Jones was added for returning two interceptions for touchdowns in the first quarter of a 2015 playoff win over Mount Pleasant Sacred Heart. Muskegon Catholic Central as a team was added for scoring 651 points in 2014 and 612 in 2016, both over 14 games. Scott is playing at Saginaw Valley State, and Jones is playing at Hillsdale College.

Bath’s Zach Parry and Gavin Parry became the latest to tie the record for longest pass play when Zach connected with Gavin on a 99-yard touchdown toss on Sept. 29 against Dansville. However, the Aggies won the game 20-12.

Fenton’s Logan Carter capped her career this spring on career lists with 50 doubles, 32 home runs and 172 RBI over the last four seasons. She also earned eight more entries for single-game multiple home runs, single-game RBI and twice for home runs in a season – with a high of 15 in 33 games this past spring. Carter, a catcher, is continuing her career at Western Michigan University.

A potent Lowell offense made the team record book lists with 67 doubles, 33 triples and 278 RBI this past spring as the team went 24-14. Then-junior Mackenzie North was added for 16 of those doubles, plus for home runs in an inning and consecutively when she hit a pair in the first inning against Grand Rapids Ottawa Hills on April 24 – and she also drove in six RBI that game. Teammate and then-sophomore Madison Jordan became the first to be listed in the MHSAA records for triples in a game with four against Ottawa Hills on April 18, and she also was added for six RBI in an inning and 11 overall in that game, plus for six RBI in the April 24 win and for 16 triples overall last season. Her season triples rank eighth on that list. North has signed to continue her career after next season at Jackson College.