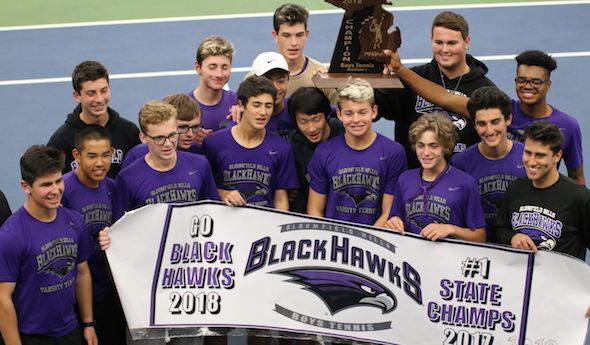 MIDLAND – Inside or outside, the Bloomfield Hills boys tennis team knows exactly what it takes to win an MHSAA Finals championship.

Last year, the Blacks Hawks won on the outdoor courts at the Greater Midland Tennis Center. Saturday, at the same location, they went back-to-back in capturing a second straight Lower Peninsula Division 1 title. This time, the action took place inside because the outdoor courts were wet due to overnight showers and winter-like weather.

Regardless of location, the taste of winning a second straight championship is incredibly sweet. Bloomfield Hills, which dominated the competition with 37 points, has now won three of the past four Division 1 titles. Birmingham Brother Rice and Ann Arbor Huron tied for second Saturday with 22 points. Northville was fourth with 20 points, and Troy placed fifth at 17.

“We have a very close team,” said Black Hawks star senior No. 1 singles player Andrew Zhang, a hard-hitting left-hander, who captured an individual title en route to running his season record to 26-0. “Everyone has a close bond with each other and cheers for one another.

“We put in a lot of hard work this season. The entire team showed a lot of dedication throughout the season. We trained very hard,” added Zhang, who’ll play his college tennis at Duke University. “We are very fortunate to have such a strong team.”

Bloomfield Hills coach Greg Burks was proud of his team’s effort, saying the Black Hawks steadily improved throughout the fall. In particular, he said that Zhang’s stellar play led the way.

“Every bit of adversity that he faces on the court, he handles spectacularly. He’s one of the best thinkers on the court that I’ve ever seen,” Burks said. “He’s the ultimate sportsman. If you ask any of the players in our area who they think is the nicest tennis player, Andrew would be right there (at the top.) He’s a great kid, and I’m going to miss him.”

At No. 1 singles, Zhang did not drop a set during the tournament. In the championship match, he posted a 6-1, 6-1 victory over Brother Rice’s Jarreau Campbell.

“It was a tough match,” Zhang said. “Jarreau is a great player.” 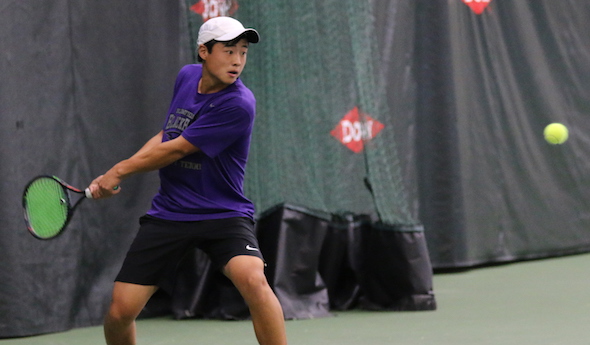 At No. 1 doubles, Noah Roslin and Adrian Wilen recorded a 6-3, 2-6, 6-4 decision over Troy’s Michael Song and Aniket Dagar. At No. 2 doubles, Ryan Frank and Andrew Chen swept Daniel Dong and Justin Yang of Northville, 6-1 and 7-6.

At No. 4 doubles, Michael Lee and James Piel, who were seeded fourth in their flight, upset the second-seeded tandem of Troy’s Alex Yang and Noah Tanguay, 6-3, 6-2.

“As a team, we continued to improve throughout the season,” Burks said. “(Like Andrew said), the entire team got along well, and bonded together.”

Bloomfield Hills posted 24 points on Friday to open the tournament. Next was Ann Arbor Huron with 20 points.

The Black Hawks built such a decisive lead early on Saturday that the team title was sealed before all of the title matches had concluded.

“Obviously, it’s an unreal feeling,” Burks said of the team capturing a second straight Division 1 title. “We played well last year, but this year, all eight flights played great (in the tournament), and that doesn’t always happen.”

PHOTOS: (Top) Bloomfield Hills’ boys tennis team holds up its Division 1 title trophy and a banner celebrating its back-to-back championships Saturday. (Middle) Black Hawks No. 1 singles player Andrew Zhang prepares to return a volley during his run to the No. 1 singles title. (Click to see more from HighSchoolSportsScene.com.)