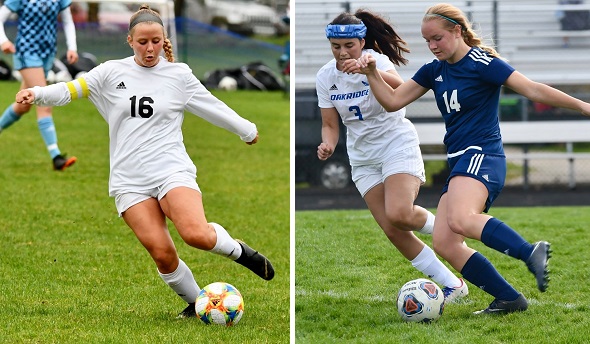 Reyna Johnson and Kendal Hoppa were always forwards growing up playing soccer, scoring goals and enjoying all the high-fives and backslaps that came with it.

So, forgive them if they were slightly offended last year when they were asked to move to defense.

“I’ve played forward my whole career, and then was told I wouldn’t be playing there anymore,” explained Johnson. “You know you’re still a good player, but it was an adjustment, for sure.”

It was also a stroke of genius by 12th-year North Muskegon coach Ryan Berends, who knew Johnson and Hoppa had the perfect combination of tenacity, toughness, experience and maturity to handle the move.

Fast forward to today and the duo of Johnson and Hoppa, along with fellow senior defensive standout Ayla Pitts, form an almost impenetrable “blue wall” for the Norsemen, who are 19-2 and ranked No. 1 in Division 4.

Snipers Sophie Mueller (three goals) and Hope Johnson (two goals), who took those spots in the forward positions, did their thing by pressuring the goal from the outset in a 5-0 victory Tuesday over Grandville Calvin Christian in a Division 4 Regional Semifinal game in Muskegon.

“That’s what we asked the girls to do – come out insanely strong the first 10-15 minutes and send a message,” said Berends, who is assisted by Logan Pitts, Jeff Grevel and Kim Gorbach. “We have a lot of speed and a lot of attacking power.”

While longtime rival Muskegon Western Michigan Christian packed in its defense against NM in last week’s District Final, Calvin Christian came out and challenged the Norse from the start.

That strategy gave creative sophomore center midfielder Audrey Wilson and fellow mids Abby Grevel and Sophia Schotts the opportunities to pick their moments and get the ball ahead to attackers Johnson, Mueller and Gwenna Pitts.

North Muskegon peppered standout Calvin Christian senior keeper Alyssa Kiekover with four shots in the game’s opening five minutes, but weren’t able to break through until Johnson got behind the defense and then used her patience and ball-handling ability to get in the right spot and score the game’s first goal at 26:36. 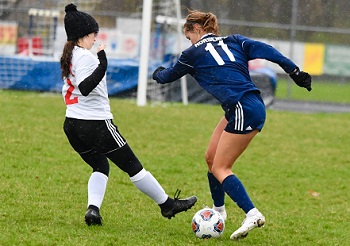 That opened the floodgates somewhat, as Mueller used her blazing speed to score two minutes later, then Johnson added a left-footed goal at the 10:25 mark – proving she is nearly 100 percent after missing much of the regular season with a broken left ankle.

The Norse led 3-0 at halftime and added two more second-half tallies, finishing with a 20-4 edge in shots on goal.

North Muskegon is motivated to take the next step after losing a shootout heartbreaker last year to Kalamazoo Christian in the Division 4 Semifinals. The Norsemen led 1-0 late in that game, before allowing a goal with four minutes remaining as K-Christian forced overtime.

“We are motivated, but we are definitely focused on one game and one goal at a time,” said Hoppa, noting the Norse finished unbeaten in West Michigan Conference play for the fourth-straight year (40-0). “We know we can do it, but we also know that we need to work for it.”

The Norse had a record-setting defensive year last spring, when they won a Regional title for the first time since 2007. NM finished the 2018 regular season with a whopping 136-1 scoring edge over its opponents, including a string of 16 consecutive shutouts, the third-longest such streak in girls soccer state history.

Pitts is the leader of this spring’s defense, which returned Johnson and Hoppa and also features talented freshman Grace Vanderwoude, who replaced departed Emma Berends. The Norse also don’t miss a beat when defensive subs Molly Stewart and Elysia Maurer enter the game.

The final line of defense is imposing 6-foot sophomore keeper Syann Fairfield, a first-year starter whose aggressive style and powerful leg adds another dimension for NM.

“Our team chemistry is really the key to our team,” said Pitts, a captain along with Hoppa. “Everyone knows their role, and everyone is all about team-first. We’ve always been that way.”

Berends believes the experience of making it to the Semifinals last season for the first time in 11 years has paid – and will continue to pay – big dividends for the Norsemen this spring.

“Last year, we had to keep telling ourselves, ‘We can do this. We can do this,’” said Berends, who has a daughter, senior midfielder Grace Berends, on this year’s team. “Because of the run we had last year, it’s a different mindset. This year, it’s ‘We are going to do this.’”

PHOTOS: (Top) Kendal Hoppa, left, and Reyna Johnson are among defensive standouts for top-ranked North Muskegon. (Middle) Ayla Pitts is another top defender for the Norsemen, and a captain with Hoppa. (Photos by Tami Pitts.)