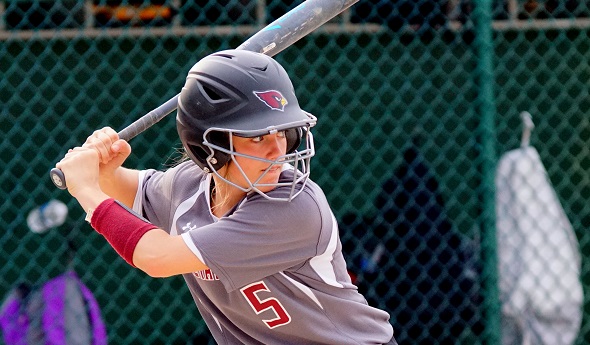 Halee Holman drove in 71 runs over 36 games this spring as a junior to raise her career RBI total to 227, which ranks eighth all-time. She also made the record book with 21 doubles this season and sits on career lists as well with 51 doubles and 24 home runs.

Junior teammate Cassidee White had made the career doubles list with 40 and career runs list with 195, with a single-season best 17 doubles this spring and her best run total coming as a freshman when she crossed the plate 70 times over 41 games.

See below for more recent softball record book additions – with more to be published later this week. Click the heading below to see the record book in full.

Frankfort’s Natalie Bigley finished her four-year varsity run this spring with 227 runs scored – 14th most all-time and one of 11 entries for her in the MHSAA record book. Six were added from a May 10 win over Bellaire where Bigley hit three straight home runs, including two in an inning and two grand slams and drove in six runs in that fourth frame and 10 for the game. She finished her career with 30 homers over 151 games. Junior teammate Haley Myers moved up career lists in runs (210), doubles (49) and home runs (29) with a season to play. Bigley will continue her career at Calvin University (formerly Calvin College).

Muskegon Reeths-Puffer’s MaKayla Thompson ranks 23rd with 1,141 career strikeouts after adding 266 in 150 innings pitched as a senior this spring.  She threw 643 innings over her four-season varsity career and will continue at Kent State University.

Jada Bolhuis left a sizable impression on the record book during just her first season at Otsego this spring, finishing with the fourth-most hits in MHSAA history, 91, and 12th-most runs scored, 75, while also earning mention with a .674 batting average. Sophomore Kendra VanderLugt joined her teammate with six entries, including for 14 home runs and 88 RBI this year, with the latter ranking eighth all-time. Junior Skylar Anderson earned a line as well with 19 doubles. As a team, Otsego was added for 450 hits, a .423 batting average, 62 doubles, 29 homers and 290 RBI over 36 games.

Brooklyn Columbia Central freshman Kenadee Tompkins also got her high school career off to a quick start with 16 doubles to make the single-season list in that category.

Sydney Stapf also made a stellar debut. The West Bloomfield freshman made the single-season home runs list with 12.

Niles Brandywine’s Kennedy Byrd was added for driving in eight runs during an April 13 win over Saugatuck, and also for hitting 12 home runs with 53 RBI for the spring. She was a junior.

Mackenize Nagelhout’s noteworthy debut came in 2018, when as a freshman she hit 19 doubles for Howard City Tri County to make the single-season list in that category. This spring, Tri County junior Alayna Merlington was added for six RBI in a May 17 game against Morley Stanwood.

Lauren Kuffel struck out 22 batters – including four in one inning – as Mio held on for a 5-4 District Final win in 10 innings over Au Gres-Sims on May 31. Kuffel, a senior, tallied 14 of those strikeouts and didn’t give up a run over the final six innings.

Mara Sczecienski became the second player in North Farmington history to be listed in the records for softball, finishing her career this spring with 202 hits, 55 doubles and 23 home runs over 127 games and four seasons. She also made the single-season doubles list with 17 as a junior. She is continuing at University of Hartford in Connecticut.