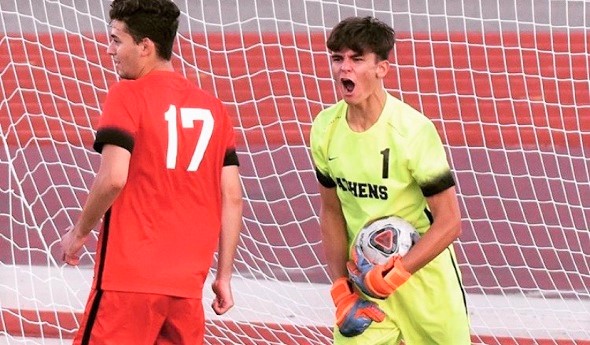 TROY – Jason Kemp has never needed the tradition of Troy Athens soccer explained to him, because he’s been able to experience the sights and sounds of the program his entire life.

Living less than a mile from the school, Kemp, now a senior goalkeeper for the RedHawks, has heard the cheers and seen the lights of the stadium from his house numerous times growing up.

“I’ve grown up watching playoff games and watching league games,” Kemp said. “I can hear the crowd and the goals from my house. My whole childhood has been Athens soccer. Now I’m a captain on the team and get to play in front of large crowds that support us. It’s kind of a dream come true for me.”

Kemp won’t be hearing cheers this year from his house, mainly because he’ll be on the field as a big reason why Athens is producing the positive crowd noise.

Kemp certainly generated a lot of cheers last year for the Athens faithful.

After splitting time as the starting keeper as a sophomore, Kemp was dominant in his first full year as the starter last fall, recording 16 shutouts and allowing just four goals in being named first team all-state by the coaches association.

Kemp is back for his senior season to anchor the net for an Athens team with understandably high expectations.

The RedHawks started the season ranked No. 15 nationally by Top Drawer Soccer and feature a senior-laden roster that has grown up playing travel ball together in the community, which Kemp said gives the team an even bigger advantage to go along with its talent.

“I’ve been playing with most of these guys my whole life,” Kemp said. “I always have thought that was cool growing up playing travel with these guys and now adding high school to it. I feel like it gives us an advantage. A lot of teams, they only have trained a couple of times in the summer before they even start with their high school teams. For us at Athens, a lot of us have been playing together since early middle school years or even elementary school years. It adds a cool twist to our team because we’ve been playing together so long.” 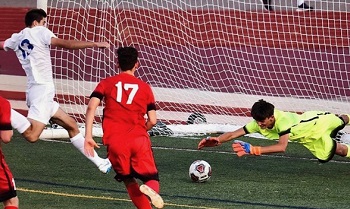 Big reasons for the 16 shutouts Kemp recorded last year were Athens’ stout defenders and organized system, but make no mistake about it: Kemp was also a vital component.

“He’s able to catch balls instead of punch them or tip them,” Athens head coach Todd Heugh said. “He’s got shot-stopping ability and quite honestly, he’s got the confidence of all his teammates. They think he’s good and in turn, I think that helps the way we defend and I think the way he goalkeeps a little bit too.”

Despite putting up terrific numbers as a junior, there is one area Kemp said he has worked on improving going into his senior year.

“Last year, I was very timid on set pieces, especially corner kicks,” said Kemp, who sports a 4.0 grade-point average and took five Advanced Placement classes during his junior year. “A lot of teams would curl a ball in the box, and I would rely on my defenders to clear that away. Now that I’m a little bigger, a little stronger and worked out a lot over the summer, those set pieces don’t really bother me anymore. I don’t have a problem coming out and jumping with a forward and getting hit around a little bit. I’ve grown out of that struggle.”

But a fifth championship has proven elusive. Athens also finished runner-up in 1986 and 2016, when it lost the Final in a shootout to East Kentwood

And the RedHawks still feel a stinging loss from last year’s tournament – they entered unbeaten and ranked No. 1, but were upset in the District Final by Utica Ford, 1-0.

While October is still a few weeks away, Kemp said there’s “a lot of fire in our bellies” among the seniors to try and bring Athens its first title in 30 years.

“This is it,” he said. “This is our last season and a lot of us have been dreaming of this moment for our whole lives. We really want to make this year count as well as we can in the postseason.”