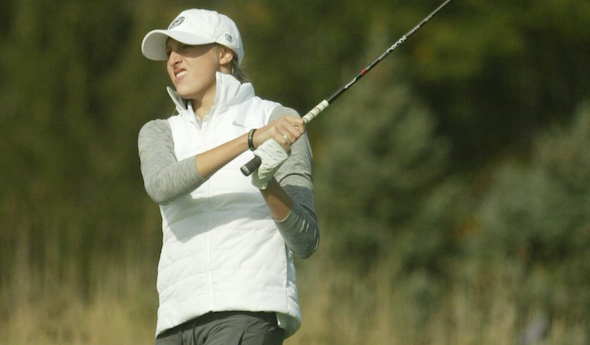 By Steve Vedder
Special for Second Half

ALLENDALE – Shannon Kennedy had no trouble sleeping the night before her drive for a second MHSAA Finals title in three years.

The Bloomfield Hills Marian junior held a two-shot lead after the first round of the Lower Peninsula  Division 3 championship at The Meadows. But instead of fretting over the many pitfalls which cause golfers to stumble, Kennedy promptly sealed her title Saturday with an even-par round of 73, including a clutch birdie on No. 18.

"I slept pretty well," said Kennedy after finishing with a two-day total of 143, three shots better than Flint Powers Catholic two-time all-stater Jolie Brochu. "You just have to go out and play your game. I felt like I was going to win."

Kennedy's individual championship sparked Marian to the team title, its first. The Mustangs finished with a 689, three shots better than reigning champ Powers. Marian shot a 335 the first day to lead the Chargers at that point by 11 shots.

Kennedy also had won the Division 2 championship as a freshman and finished third a year ago. She said she was confident the team would be in the hunt for a championship with a chance at upsetting a Powers team which lost only one golfer from 2018. After Marian captured the Catholic League championship late in the season, Kennedy said a whisper about winning a state crown grew into a real opportunity.

"We always knew it was a small possibility. We didn't talk too much about it until we got here and we thought, 'Hey, we can do this thing,’" she said.

Marian co-coach Cathie Fritz agreed with Kennedy that winning this weekend was a possibility. Fritz and co-coach Leon Braisted teamed up to win five Finals titles with five second-place finishes at Birmingham Seaholm until moving to Marian four years ago.

"We've got girls who work hard," Fritz said. "Marlo Hudson is our only senior, Shannon has worked hard the last 12 months and we've got multiple juniors who we knew would keep us in the hunt." 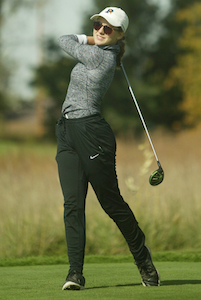 Marian's three juniors – Lauren Sass, Laura Emerson and Sarah Kuredjian – all broke 100 on Saturday. Hudson had rounds of 79 and 91.

Detroit Country Day finished third with a 711, Marshall was fourth at 712 and Big Rapids rounded out the top five with a 731. Powers entered the tournament ranked No. 1, while Marian was second and Big Rapids – which has four top-10 finishes since 2016 – was No. 3.

Other top individuals this weekend included Marshall's Karlee Malone, who was third with a 153. Madeline Blum of Marysville was fourth with a 160, and three golfers tied for fifth at 163: Haslett's Sydney Dausman, Grand Rapids Christian's Ryann Breslin and Big Rapids' Hope Thebo.

Braisted said Kennedy's individual title was no surprise to him.

"It's not about her; she's very humble," he said. "She's that precise. It's important to her to win, but she really wanted the team to win."

Powers coach Jim Snow said there is often a small gap between high expectations and actually winning a championship.

"Golf is a funny game. You don't always win just because you're favored," he said. "There can be weird bounces or a putt won't fall. To win a championship, things have to fall into place. That's just the nature of the business. You have to be precise and if you're not, you don't win.

"We played hard and just lost to a good team."

PHOTOS: (Top) Marian’s Shannon Kennedy follows through on an approach during Friday’s first round of the Lower Peninsula Division 3 Final. (Middle) Powers’ Jolie Brochu follows one of her drives. (Click to see more from HighSchoolSportsScene.com.)