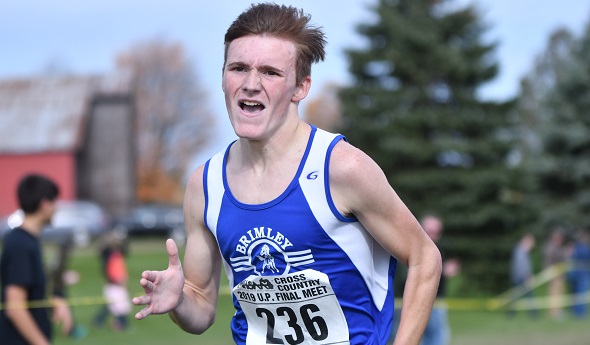 Plotkin finished an accomplishment Saturday that has been achieved in Michigan high school boys cross country only once before. By winning the Upper Peninsula Division 3 Final championship for the fourth time, Plotkin joined Central Lake legend Ryan Shay as the only other four-time boys champion (LP Class D 1993-96), earning the MHSAA “Performance of the Week.”

Plotkin’s time of 17:20.7 was nearly 11 seconds ahead of the field at Gentz’s Golf Course in Marquette and capped an undefeated season that included for the first time a championship as well at the Mackinaw City Invitational on Sept. 26. Plotkin entered this fall with a personal record (PR) of 16:50 and lowered it to 16:32. This season’s Finals winning time actually was just the third-fastest of his four, further backing up Brimley athletic director Hugh Clarke, who called Plotkin arguably the school’s most dominant athlete over the course of a four-year high school career. Plotkin also owns an Upper Peninsula Division 3 Finals track championship in the 3,200 from 2017 and will run that race plus the 800 and 1,600 in the spring. He holds all of his school’s cross country records and is part of two record-holding track relays. Plotkin also plans to play basketball this winter for the first time since freshman year.

Also worth applauding: After an admittedly disappointing freshman year academically, Plotkin has raised his grade-point average a full point over the last two years and is considering a number of options athletically and academically at the college level. He’s planning to study business administration and finance.

Coach Wilson Hester said: “When I first saw him as an eighth grader, I could tell right away he had ability, but he didn’t know pacing or how to run. He would just go out and run fast or slow with not a lot of pacing involved. Once we got him doing proper training and technique work, and he was learning how to pace, he flourished. … He’s brought lots of recognition to the school. He’s been leading the track and cross country teams for the past four years, and everybody in the region and Upper Peninsula knows who he is. … He’s just scratching the surface of what he can do. He has some tremendous potential. I think at the next level, with more mileage, more of a training season – our seasons are so short up here, it’s difficult to get them to where their absolute potential can be – I have no doubt (he’ll continue to improve).”

Performance Point: “In the last probably quarter mile of the race, I definitely thought back to what everyone had said to me when I won freshman year,” Plotkin recalled of Saturday. “They said, 'Oh my goodness, you have so much potential. You could probably do this four years.' And I remember I was scoffing, thinking no, there will be another up-and-comer, somebody who can beat me. And looking back I remember Mr. Clarke told me if I win four years in a row, as soon as possible I'll be in the Brimley Hall of Fame. And just one of the things that came to me in that quarter mile, I was just thinking, one, how wrong I was – I thought that I couldn't do it, and here I was doing it. And plus, also, I was just super-excited to have done it, because it was such a feat – only one other person has done it.”

No shot at putting: “Eighth grade track was my first time running. I actually wanted to do shot put because my summer job the summer before was moving split wood for my grandpa. And then my coach Justin Carrick asked me, he said ‘Hey, we've got nobody doing (the 3,200). You're scrawny. You can do it. We just need someone to run the 2-mile. I don't care what you get – you've just got to run it.’ In middle school it's the first event, and I won it. I ran like an 11:20 that day, which is really bad for eighth grade. He took me out of shot put and put me in the mile and 800, and I went undefeated all the way until the last two meets, which coincidentally were the only two meets we got medals for and Jimmy Storey from Pickford beat me in the 800 both of those meets. So I lost two races and by the end of the season I was down to 10:55 for my 2-mile time. … I fell in love with winning. Once I had a little bit of something to do it for really; now that I had a shoebox of medals, I was like yeah, I can do this. And then I got a text from my friend over the (eighth-grade summer) that was like, ‘Hey, why don’t you come do cross country? It’s like track in the woods.’”

Just getting started: “Coming into it as a freshman, I didn't know that I would have the potential to win. My coach told me first race, do top 20. And I won. From that point, there weren't too many races that I lost. And the ones I did, basically the meet that I lost consistently every year was the Mack(inaw) City Invitational where we ran against Harbor Springs, Petoskey and Gaylord St. Mary. And even at those meets I got second or third. And this year was my first year that I won it. … It came to me naturally as a freshman, and as the years went on I realized I had to do a lot more offseason work and I had to do a lot more in-season work not only to keep my speed, but to go faster. This was my first summer that I actually ran consistently all summer, so this season I came out and broke my PR first meet and then consistently stayed within the mid 16:30s.”

Bays on a run: “When I came in as a freshman, our cross country program was a club. Cross country was out of the picture for a lot of students, and a lot of people didn't want to participate. And track, the year that I was in eighth grade, high school track I think had 11 participants. So it's amazing to see not only how I, but how the entire cross country team has progressed. This season we had about 15 consistent runners for cross country, and last track season … I think by the end we had 25 participants, which is pretty impressive considering we had just 11 four years ago.”

Numbers games: “I think I want to run a business, or, I really like numbers; I’m in accounting right now, and I love balancing journals. So one thing I could do is be a financial officer at a bank, which is a pretty cool deal. … I definitely love in physics, when we have equations, just trying to figure out the mystery behind it and when you can’t make something add up.”