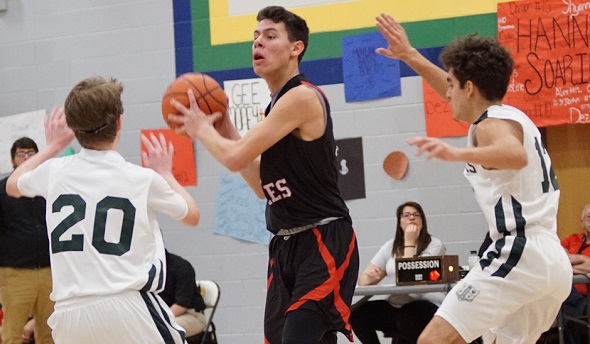 The Soaring Eagles excelled at both on their home court Feb. 5 when they sank an Upper Peninsula-record 24 3-point shots in a 73-39 triumph over Northern Lights League rival Big Bay de Noc. They also drained 20 trifectas just four days earlier in a 68-20 victory on Mackinac Island.

In addition to tops in the U.P., the 24 3-pointers also rank third all-time in MHSAA history, while the 20 are tied for seventh-most by a team in one game.

"We didn't think that was a big deal," said 6-foot-2 junior Joe Larson, who connected on six 3-point shots for 18 points against Big Bay. "It's just great to be part of this program. It's like a family atmosphere.

“Coach (Josh Eagle) wants us to split it up a little. He wants us to work the ball inside and continue shooting the threes. Getting the record was so much fun and getting 20 at Mackinac Island got us a step closer. We still need to work on some little things in practice. Once we get those ironed out, we'll be fine."

Eagle tries to encourage the players to take the 3-point shots, which he believes is just part of the game.

"We try to get a shot up pretty quick," he said. "Earlier this season, the kids were pretty shy about shooting the threes when we were facing zones. Now, they're not shy. Our strength is running the floor. We try to launch as many threes as we can and get offensive rebounds."

The Soaring Eagles (14-4) rode an eight-game winning streak into last weekend's NLL Tournament, where they beat Beaver Island and then lost in the championship game to Kinross Maplewood Baptist. 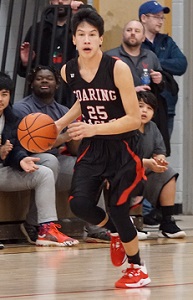 In their previous outing the Saturday before, sophomore Gage Sagataw scored 23 points as the Soaring Eagles hung on for a 60-58 triumph over Bay Mills Ojibwe Charter.

"It felt great to do that," he said. "We've been close friends for a long time, which made it more special. We put a lot of time in on our shooting in the offseason, but sometimes we have to rely on our defense. It doesn't bother me if I miss a three because I know we just have to get back on defense.”

Hannahville now will prepare for the Division 4 District tournament at Rapid River. The Soaring Eagles face Rock Mid Peninsula in a District Semifinal on March 11.

Eagle coached the girls team at neighboring Bark River-Harris for three seasons prior to returning as boys coach to the school on the Potawatomi Reservation in northeastern Menominee County.

"They always work real hard, and we're giving them the opportunity to become men," said Eagle, who coached boys and girls basketball at Hannahville prior to his time at BR-H. "Training the kids to be good people and teaching them the value of hard work is the main objective. Seth Miller (former coach), Ross Rahoi (current assistant coach) and I work with each other and other people from the community to help make them good representatives.

"We're proud of all the players. They're good ambassadors for the community, and as always, there's a long road ahead of us."