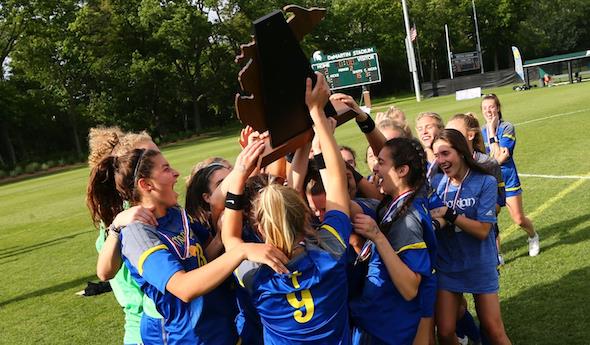 Bloomfield Hills Marian entered the 2019 Girls Soccer Finals with the third-most championships in the sport in MHSAA history, and seeking to become the seventh program to win three in a row.

A familiar opponent awaited. And eventually so too did sophomore Maria Askounis as the final minutes of overtime ticked down.

Her tap-in of a rebound with 4:18 left in overtime last June 14 gave Marian a 2-1 lead on its way to clinching the Division 2 championship over Grand Rapids Forest Hills Northern, which the Mustangs also had defeated in the 2017 and 2018 championship games.

The title was Marian’s eighth total and its third straight, a program first after previous teams won two consecutive on two occasions.

Forest Hills Northern opened the scoring on Grace Sayers’ goal just past five minutes in, and Emily Rassel tied it 1-1 with a goal four minutes into the second half. As overtime wound down, Marian’s Sara Stroud fired a corner kick that was headed by Rassel toward the goal, deflected off the keeper and pounded into the net by Askounis.

“My coaches told me to stay at the far post, and so I stayed on the far post,” Askounis said that day. “That’s where the ball went, and I just tapped it in. I scored last game, but not like this in the state championship. It feels amazing.”