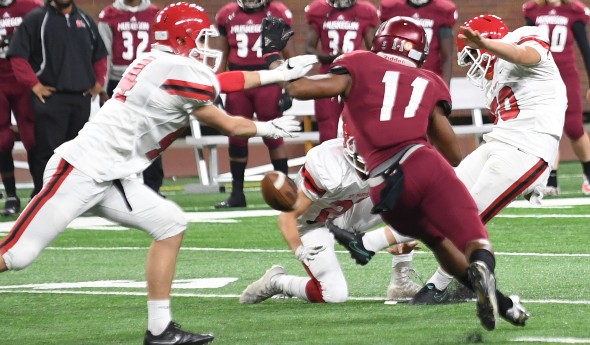 In keeping with the theme of 50-yard field goals written in this space earlier this week by MHSAA historian Ron Pesch, let’s take this week’s "Moment" to remember the longest field goal ever in an MHSAA Playoff Championship.

No one has ever gone over 50 yards. Heck, no one has ever tired a field goal over 50 yards that I can remember. But Ben Fee came as close as you could in the 2016 Division 3 Final for Orchard Lake St. Mary’s against Muskegon with a 49-yard boot in the Eaglets’ 29-28 victory.

The call on FOX Sports Detroit was cute – Fee was wearing Number 50, and while his holder straddled the 40-yard line, giving the appearance of a 50-yard attempt – the kicking block was a good half-foot in front of the 40, and by rule making it a 49-yard attempt. The kick broke a record set in the previous game of 47 yards by Liam Putz of Grand Rapids West Catholic and tied a record for most field goals in the final game with three also set by Jake Townsley from Warren DeLaSalle in 2014. Fee also had field goals of 32 and 35 yards in the contest.

The kick gave St. Mary’s a 23-21 lead with 4:47 left in the fourth quarter, setting the stage for one of the most dramatic finishes in playoff history. Muskegon would return the ensuing kickoff to near midfield and then score six plays later, on a La’Darius Jefferson three-yard run, with the extra point making it a 28-23 game in favor of the Big Reds with 1:55 to play.

Starting on its own 20-yard line, St. Mary’s got three runs from Rashawn Allen for 37 yards and reeled off a total of nine plays in 1:51, culminating with Caden Prieskorn’s 18-yard pass to Ky'ren Cunningham for the game-winning score with four ticks left on the clock.