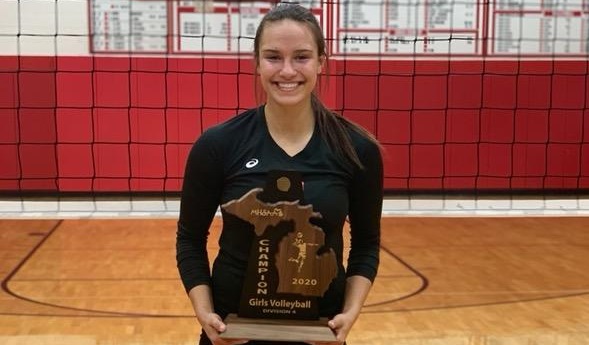 Over the years, the Camden-Frontier senior has made the transition from being a wild swinging middle-schooler to an apprehensive freshman on the varsity to an all-state volleyball player headed to Trine University to play the sport she loves.

“I fell in love with volleyball when I was in the fourth grade,” she said. “I’ve played basketball and softball, but nothing feels like volleyball.”

It wasn’t always easy for Nicholls, who has overcome the loss of her mother Amy Nicholls during her sophomore season to become a tower of strength for the Redskins.

“She’s been through a lot, but she’s a tough kid and is going to make something of herself,” said Camden-Frontier coach Dawn Follis.

Nicholls’ mom was diagnosed with ovarian cancer in the early part of 2018. By volleyball season that year, her mom had become very ill, enough that Nicholls missed a match when her mom went to the hospital. That season, her mom lost her battle; she died on a game day.

Nicholls had asked her mom earlier that day if she should play.

“I said to her ‘What do you want me to do?’,” said Nicholls, who was 15 at the time. “She squeezed my hand and told me to go. She couldn’t talk, so we had a way to communicate through squeezing my hand. She wanted me to play.”

About halfway through the match against Pittsford, Nicholls felt something she had never experienced before – a feeling, almost like a change in her body.

“My aunt was at the game watching me,” she said.  “She even noticed the change in me. I got home after the game, and I figured out the news.”

Her mom, an English professor and dean of the Jannen School of Arts and Sciences at Trine University in nearby Angola, Ind., had passed away.

Nicholls turned to volleyball to help her through. Using her mom as her strength, she didn’t miss another match. Volleyball has always been a big part of her life.

“I’ve come a long way since my freshman year,” she said. “Being pulled up to the varsity was a huge thing. It was a great opportunity for me to grow as a player. It really opened my eyes.”

After that season on the varsity, she started playing club volleyball, first at a club in Hillsdale, then at Team Pineapple Volleyball Club in Angola, which is less than a half hour from her home.

Follis and the Redskins have built a small-school powerhouse in south central Michigan, just north of the Michigan-Indiana state line. Nicholls helped Camden-Frontier to a school-record 40 wins that sophomore season and they won 36 matches and the school’s first Regional crown in 2019. This fall’s was another outstanding season for the Redskins, who went 25-3 and won a fourth-straight District title. Over Nicholls’ four varsity seasons, Camden-Frontier won more than 100 matches. 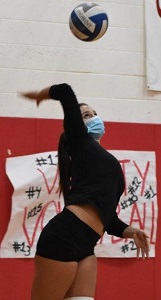 Nicholls had a great season in 2020, earning first-team all-state honors from the Michigan Interscholastic Volleyball Coaches Association. Playing about half the matches the Redskins typically play in a season, she recorded 395 kills, averaging 4.34 per set, and accumulated 141 digs. Two of her teammates, junior Dakota Sigler and senior Heather Shaw, made the all-state honorable mention list. (Camden-Frontier fell 3-2 to Lansing Christian in a Regional Semifinal on Nov. 10; Lansing Christian will play in the Quarterfinals on Tuesday.)

Follis said Nicholls knows how to use her height to her advantage.

“She’s very tall and very athletic and aggressive,” Follis said. “She’s worked really hard on her game. When she was in middle school, she was tall and had this wild swing. She played all of the time, and it shows.”

Nicholls stands 6-foot tall. She had 70 blocks and block assists this season.

“I’ve always been really tall,” she said. “I think by the fifth grade I was taller than any boy in my class.

“I always knew I was tall and that would benefit me, but I knew that wasn’t going to be enough. I worked hard to increase my vertical. I put in a lot of time. I definitely try and use that to my advantage."

Follis said Nicholls did use her height to her advantage, something not all tall players do.

“She’s a hitter, and she really jumps well,” said Follis. “In high school she has the ability to change the game with her hitting. She’s a game-changer.”

At the Camden-Frontier matches over the past couple of years, there was typically a large contingent of aunts, uncles, grandparents, and cousins watching Nicholls and her teammates play. That is one of the reasons she chose Trine – her family will be able to see her play.

Nicholls said she loves to hang out with family and friends but doesn’t have time for a lot of other interests outside of sports. She likes to stay busy, no matter what sports season it is. Right now, she is lifting and running on nice days and staying ready for the upcoming basketball season. She’s been on the varsity softball team since her freshman season as well.

“I am fulltime, 100-percent motivated to focus on my game,” she said.

At Trine she plans on majoring in exercise science with the hopes of going into physical therapy or something in the athletic field.

“I want to be there for my mom,” she said. “It’s a big opportunity that I will even get to play there. That’s where I wanted to be.”

Trine is a big part of the Nicholls family. Not only was her mom a professor at the school, but she also graduated from Trine. Her dad Scott and brother Mason also went to Trine. Jocelynn started going there at a young age and impressed the volleyball coach years ago.

“When I was a freshman, I went there for a camp and the coach told me if I continued to work hard, I would get a (scholarship) offer,” she recalled.

Losing her mother a couple of years ago, Nicholls said, completely changed her outlook on life.

“It provided me an opportunity to grow,” she said. “It makes me want to give 100 percent all of the time and not take anything for granted. You are not promised tomorrow.”