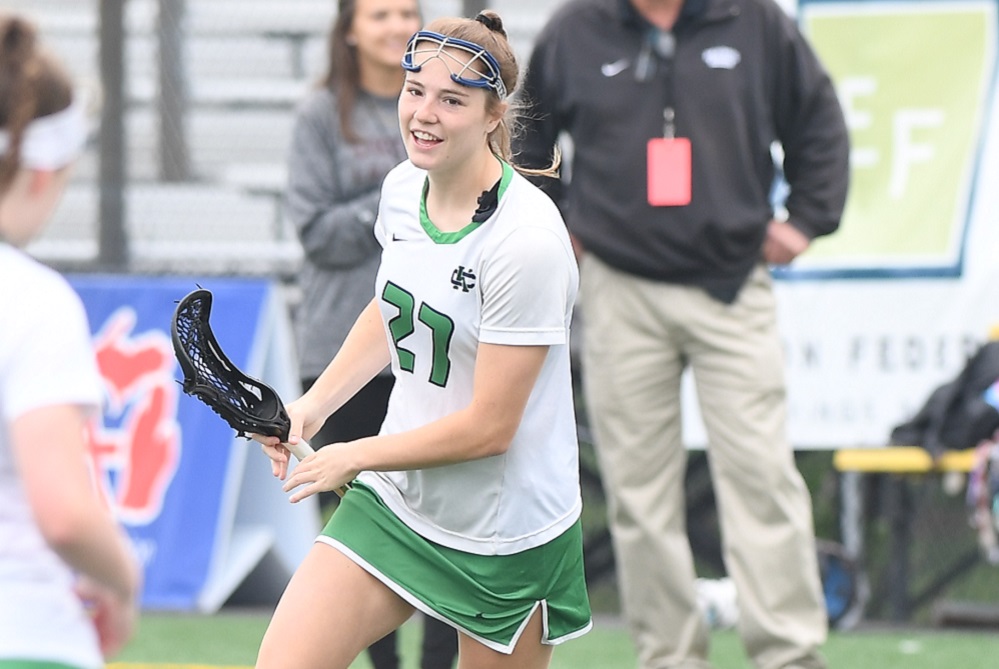 Isabelle Scane finished her four-season varsity girls lacrosse career in 2018 with a pair of records that may not be challenged for some time.

The Bloomfield Hills Cranbrook Kingswood standout scored 461 goals – 52 more than the next highest scorer on that list – and her 577 career points over 93 games are 54 more points than the rest of the list. She also finished with 116 career assists to rank eighth in that stat category.

Scane has continued her career at Northwestern and earned All-America honors as a sophomore.

Click to see the girls lacrosse record book in full, and see below for more recent additions for baseball, 8-player football and softball.

Muskegon Mona Shores grad Austin Flowers capped his career in 2018 with a .390 batting average – and added significantly to his ability to get on base by being hit by pitches 21 times. That total ranks sixth for one season in MHSAA history.

Colon’s quest to finish undefeated and win the 2019 Division 1 championship saw the Magi set an 8-player record with 91 touchdowns. Their 59 rushing touchdowns ranked third all-time, and they also made the list with the second-most interceptions for an 8-player season, with 20. Senior Austin Stoll was added for kicking 51 extra points over his 12 games.

Au Gres-Sims quarterback Caden Zeien can be found all over the passing record book for both 11 and 8-player football after a four-year career that saw him lead teams in both formats. He’s among career 11-player leaders with 430 completions, 748 attempts, 5,906 yards and 72 touchdowns over 28 games and the 2015-17 seasons. After his program switched to 8-player in 2018, Zeien capped his career making single-season lists with 2,125 yards and 36 touchdowns through the air over 12 games. Zeien is playing now at Alma College.

Portland St. Patrick’s run to the 8-player Division 2 championship game this season saw the Shamrocks score 85 touchdowns, second-most in 8-player history, led in part by 35 passing TDs by quarterback Connor Cross. Scoring tosses made up nearly 37 percent of his passes, and 18 of those scores were to senior Zach Spitzley, who caught 30 passes overall for the season but for 1,047 yards. Along with Cross’ scoring passes, Spitzley’s yards and receiving TDs made the record book as did his 1,721 yards and 24 touchdowns over three years playing offense and four on varsity overall. The Shamrocks also made the list four times for holding teams to five or fewer first downs in a game – tying the record by allowing two Sept. 27. Cross will be a senior this fall.

Mayville senior Jacob Miller capped his career last fall with a pair of 8-player record accomplishments, with 30 tackles for loss for the season and nine in a game against Genesee. Teammate Jeffrey Frost also was added to a career record list with the third-most touchdown receptions, 33 over 39 games and four seasons.

Bridgman earned the first entry for come-from-behind victory for 8-player on Oct. 23. The Bees came back from a late second-quarter 47-0 deficit to defeat Wyoming Tri-unity Christian 54-53 in overtime.

Clay Ayers became the first to be listed in the 8-player record book for both extra points in a game and consecutive during one game, making 10 of 10 in Adrian Lenawee Christian’s 78-14 playoff win over Mayville on Nov. 6. Ayers was a junior this season.

From 2013-19, Unionville-Sebewaing won three Division 4 championships and finished Division 3 runner-up twice – and with that run came a number of totals eligible for record book placement. Individually, 2019 grad Rylee Zimmer was added for 71 hits and 11 home runs that season, and 39 career doubles over three seasons. Katelyn Englehardt, a senior in 2018, was added for 22 doubles that season and 33 over three years on varsity, while now-senior Brynn Polega was added for 20 doubles in 2019 and 2014 grad Stephanie Neuman was added for 18 doubles her junior season. As a team, USA is listed 33 times for achievements over the years; the most impressive of those added recently might have been 421 runs scored over 42 games in 2013, 100 doubles (seventh most) over 40 games in 2018, 365 RBI (eighth most) over 42 games in 2013 and 30 shutouts (fifth most) over 41 games in 2014. Neuman went on to play at Ferris State, Zimmer plays volleyball at Saginaw Valley State and Polega will continue next season at Northwood.

PHOTO: Cranbrook Kingswood’s Isabelle Scane is introduced before the start of the 2018 Division 2 championship game.