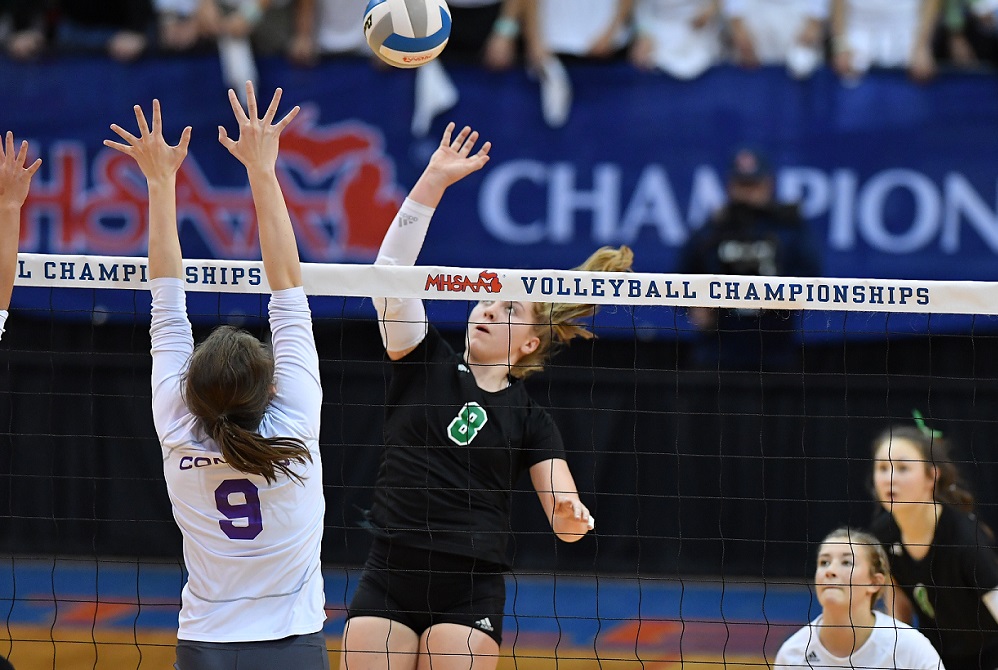 Anna Smith’s four-year varsity career capped in November included helping Mendon to back-to-back Division 4 championships in 2018 and 2019, and she finished last season among the top hitters in MHSAA history.

Smith graduated with 2,234 kills to rank 18th all-time since the start of rally scoring. She has eight record book entries total, also including for a career-high 740 kills as a junior, a tied-for-second 24 aces in a match last fall, and a career total of 398 aces to rank 13th on that list.

She’s continuing her career at College of Charleston (S.C.).

Click to see the volleyball record book in full, and read on for more recent record book updates in baseball, football and girls lacrosse.

Belleville senior quarterback Christian Dhue-Reid became the first to be added to the football record book for the 2020 season after throwing for seven touchdown passes – including six during the first half – of his team’s win over Dearborn Fordson last Sept. 25. The first-half TD passes tied for sixth-most in a half, and the seven total tied for eighth-most in a game.

DeWitt’s championship run last season included a number of record book performances, on both sides of the ball. Then-junior quarterback Tyler Holtz made the records for 2,396 passing yards over 12 games, and for a single-game high of 405, and also for 35 passing touchdowns. Senior Tommy McIntosh was added for 245 yards and four touchdowns in the same game, against Grand Ledge, and Nathaniel Deppin was added for a 96-yard kickoff return in that same game. The Panthers as a team made the touchdown list with 70, and also for giving up only 80 points over the season. Additionally, senior Brandon Soltis finished his two-year varsity career with 78 extra points and also was added for his 45 as a junior. A number of others were added for accomplishments over the last four seasons, including Blake Gatfield, Noah Koenigsknecht, Alan Smith, Jack Horan, Carson Hayes and Luke Bresser. Koenigsknecht and Bresser play for Northwood.

Then-junior Nick Kay earned his first record book entry last Sept. 25 with a 52-yard field goal for Walled Lake Central against Troy. Also added was past quarterback Nick Krumm, who scored eight total touchdowns (six rushing) during a 2013 game against Waterford Mott. Krumm was a junior that season; he went on to play at Michigan State.

Despite a shortened 2020 season, Brady Hessbrook finished his four-season Ithaca career with record-book highlights. He made the single-season passing yards list with 2,002 over eight games, and the career list with 4,091 over 37 games total. He made the lists for passing touchdowns in one half and a single game with six against Michigan Lutheran Seminary on Oct. 9, on the way to making the single-season passing TD list with 30 and career list with 51. Hessbrook is continuing his career at Wayne State.

Livonia Stevenson senior Caden Woodall put together one of the most impressive rushing seasons in state history over just eight games last fall. On just 186 carries, Woodall ran for 2,228 yards and 34 touchdowns, making single-season lists for both. He scored six touchdowns in a game twice and totaled more than 200 yards rushing in seven straight games. He’s continuing his career at Harvard.

Three Grand Rapids Forest Hills Central players earned single-game entries during the 2021 season. Sophomore Gabriella Hendricks was added for eight goals in a May 19 game against East Grand Rapids, seven goals on May 14 against Ann Arbor Skyline and five assists on May 10 against Grandville. Sophomore Shannon Murphy also had seven goals in that Skyline game and seven against Grand Rapids Christian on May 20, and sophomore Delaney Smith had five assists against Holland West Ottawa on March 29.

PHOTO: Mendon’s Anna Smith follows through on a kill attempt during the 2019 Division 4 championship match against Leland.