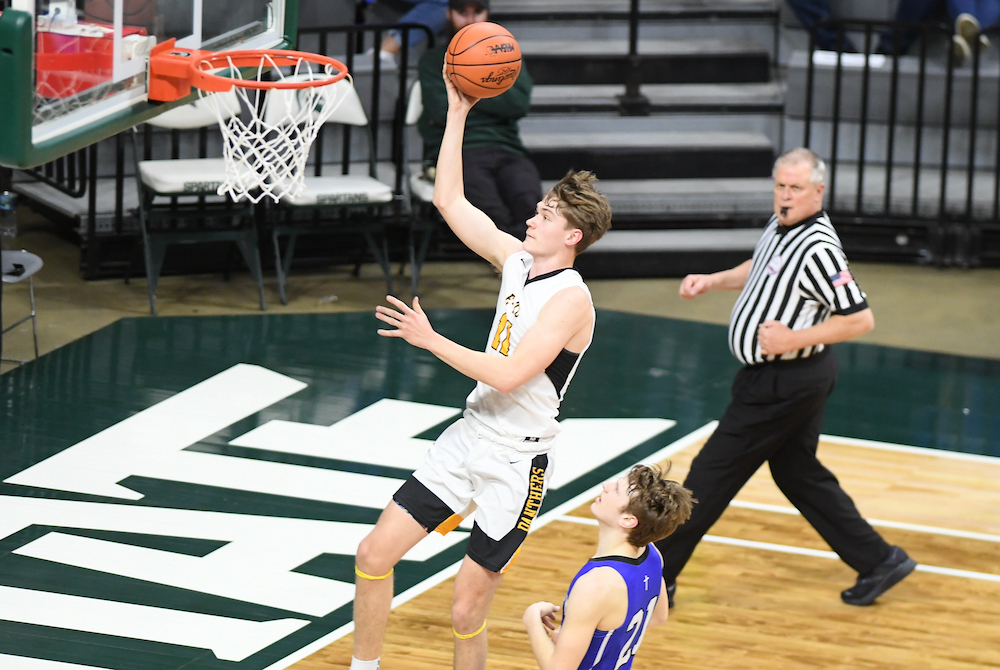 EAST LANSING – What began playing out early like a certain blowout turned into quite a thriller to begin Thursday’s Division 4 Boys Basketball Semifinals at Michigan State University’s Breslin Center.

Making its first Semifinals trip since since finishing Class D runner-up 1982, Ewen-Trout Creek was in full control in the first Division 4 matchup of the night with a double-digit lead for the majority of the game.

But appearing in its first-ever Semifinal, Lake Leelanau St. Mary pulled off a furious comeback, tying the game with just over two minutes remaining.

Ultimately, Ewen-Trout Creek made more plays from there, holding off St. Mary to earn a 62-56 win and advance to its first championship game since it won the Class D title in 1972.

“Wow,” Ewen-Trout Creek coach Brad Besonen said. “That was fantastic. High school sports at its finest. Two small schools on the big stage at Breslin Center. These guys have dreamed about being here forever. They’ve played together since second grade.”

After trailing 48-31 with 1:55 remaining in the third quarter, St. Mary began its rally, mainly because it finally found some rhythm offensively. 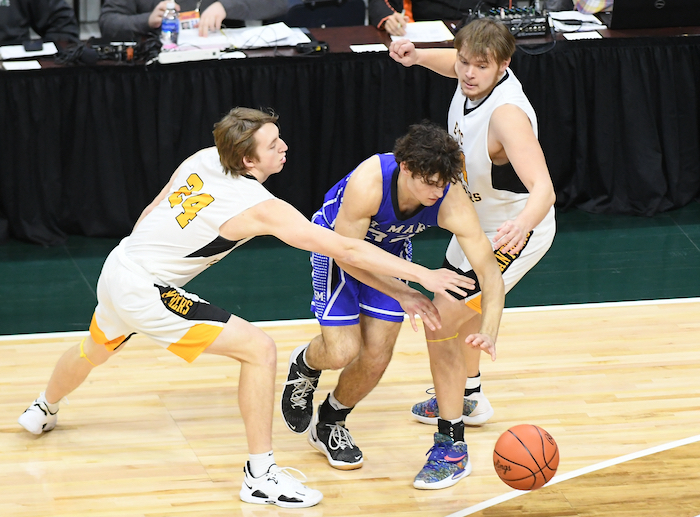 Then, the Eagles made their big move.

The comeback wasn’t anything new to the Eagles, who trailed by 18 in the second half of their District Final against Buckley and by 12 points in the final five minutes of their Regional Final against McBain Northern Michigan Christian before rallying to win both games.

“They just have no quit in them,” St. Mary coach Matt Barnowski said.

But down the stretch, Ewen-Trout Creek regained its composure.

Senior Jaden Borseth gave the Panthers a 58-56 lead with 1:46 remaining, and after St. Mary had 3-point shots rim out on back-to-back possessions, Ewen-Trout Creek took a lead with 33.8 seconds left on two free throws by senior Kelsey Jilek.

Following another missed 3-pointer by St. Mary, Borseth made two free throws with 8.2 seconds remaining to make it 62-56 Panthers.

Jilek led the way with 19 points and 11 rebounds, Borseth scored 18 points and senior Eric Abramson added 15 points for Ewen-Trout Creek (23-3), which had its eye on this year the minute last season ended with a loss to Bessemer in the District round.

“We were in the gym the day after we lost,” Jilek said. “We wanted more than anything to make a run last year. We put everything we had into it, and here we are.”

The Eagles started the season 2-3, then went 19-2 the rest of the way to make school history.

“That was a fun game,” Barnowski said. “Everybody got their money’s worth, there’s no doubt about that. I’m proud of these kids.”

Ewen-Trout Creek got off to a good start offensively, making nine of its first 15 shots and taking a 20-14 lead after the first quarter.

Leading 24-18 in the second quarter, the Panthers started to separate, going on an 11-2 run to take a 35-20 advantage with 1:08 remaining before halftime.

The Panthers eventually took a 37-22 lead into the break.