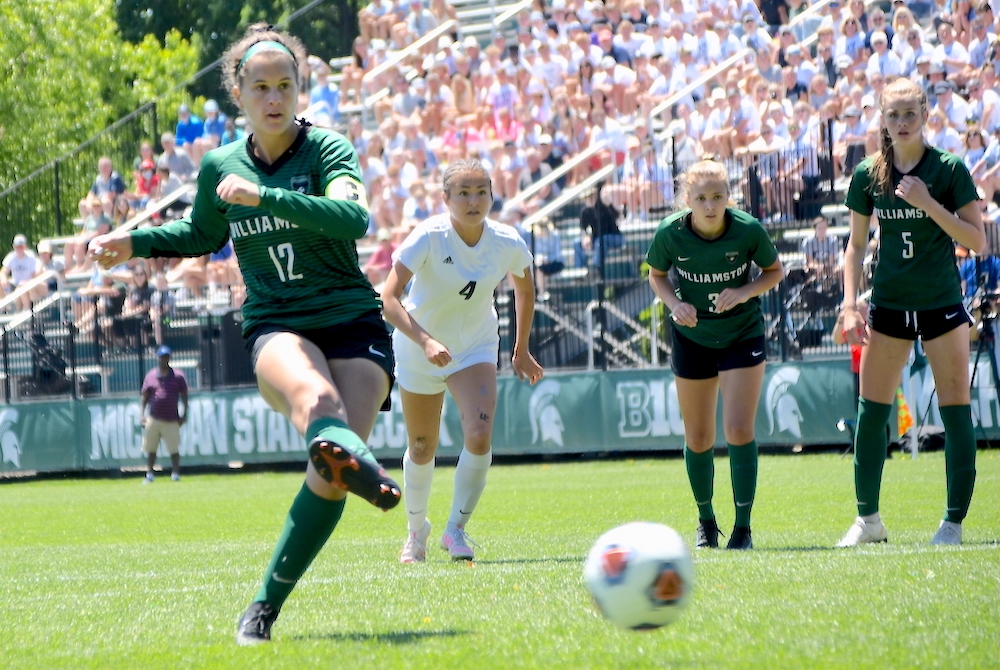 EAST LANSING – Williamston made its third appearance in an MHSAA Girls Soccer Final on Saturday. And for the third time, the Hornets were seeking their first championship against longtime powerhouse Hudsonville Unity Christian.

Williamston had lost Finals to the Crusaders in overtime in 2008 and 1-0 in 2010. But consider any lingering Unity nightmares over for the Hornets.

Junior Breyer Fenech blasted in a shot off an assist from Kaley Douglass with 1 minute, 21 seconds to play as Williamston pulled out a heart-stopping 3-2 victory in the Division 3 championship game at Michigan State’s DeMartin Stadium.

“Kaley put it right on my foot,’’ said Fenech. “She and Liz (Bellinger) are both going to play in college. They are great players. They know how to play. I don’t play mid that much, but unfortunately one of our midfielders got hurt the last game. I kind of saw Kaley coming down and I saw an opening and I called for the ball, she was able to get it through and I put it away.’’

Said Douglass: “It was all her. She called for the ball, and I heard her immediately. I slid it through, and it was all her. If she hadn’t gotten my attention, I probably wouldn’t have known she was there. She was the one that finished it, and I’m so thankful she did.’’

“Their second goal turned the game around,’’ said Unity coach Randy Heethius. “The winning goal was a thing of beauty. Give them a lot of credit. They are a good team. Obviously, we’re disappointed with the way the game turned out. We’re young. I think we have a chance to get back.’’

Super freshman Ava Lutke gave the Crusaders a 2-1 lead with her 26th goal of the season with just over 21 minutes left in regulation. It appeared to be enough. 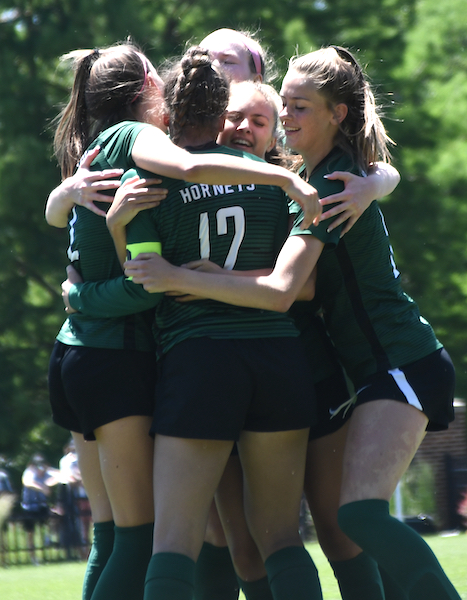 However, the goal of the game was a 45-yard blast 11 minutes later from senior midfielder Bellinger, a free kick that landed in the right corner of the Unity net.

“It brought a lot of energy; I wasn’t even expecting that,’’ said Bellinger. “I was just trying to get one in there. I think it did bring our energy up. I practice that every single day, hitting balls and redoing it. It was exactly what I was hoping for. We were storming the net and it went in, which is what we were hoping for.’’

And it fired up her teammates.

“When she hit that I said this isn’t over. We have 10 minutes left,’’ said Douglass.

The Crusaders entered Saturday having won 10 girls soccer Finals titles – the second-most of any school – with three runner-up finishes, but hadn’t been in a championship game since 2016 when they lost to Flint Powers Catholic.

Williamston’s Emma Gorsline, a junior midfielder, wasn’t at full strength because of a hamstring injury. She was one of seven players who had made either first- or second-team all-state or honorable mention in 2021.

It was amazing that Williamston goalie Abby Pieper was even playing, after suffering a concussion during hockey season and an eye injury that kept her from seeing for a month.

“I think I played about 10 games this year,’’ said a jubilant Pieper. “I had some vision loss. I started feeling better late April, early May. It was a quick season for me, but it paid off.’’

Junior forward Olivia Bosworth, with an assist from Jade Taylor, got the Crusaders on the board less than five minutes into the game to give Unity Christian a 1-0 lead.

A collision in front of the Crusaders' goal 6:05 into the game led to a Douglass penalty shot, which she drove into the net to tie the score at 1-1.

Both teams had chances over the final 33 minutes of the first half, but weren’t able to convert.

Lutke had a great shot to open the second half, but it was stopped by Pieper.