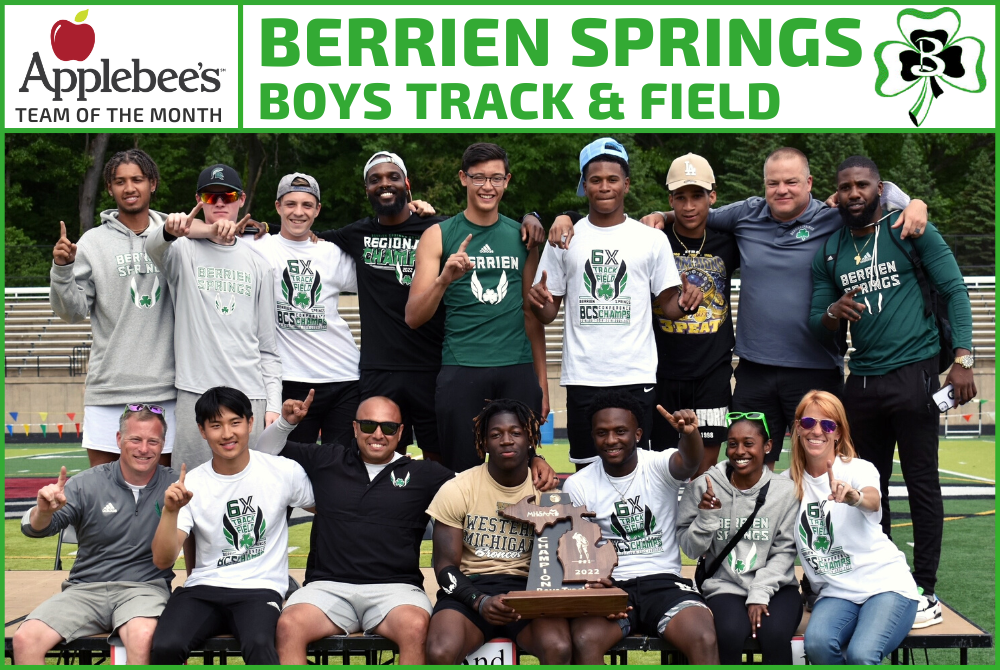 With two elite standouts comparable to the best pairs on any team statewide, and a deep group of sprinters capable of scoring major points, Berrien Springs track & field coach Johnathan Rodriguez had a feeling this could be a special spring for his boys team.

He scheduled tougher for that possibility, and planned everything pointing toward the Lower Peninsula Division 2 Final on June 4.

But Rodriguez didn’t breathe easily until that morning at Ada Forest Hills Eastern.

“I think the whole month, I think I was on pins and needles thinking of everything that could go wrong or wondering if we were ill-prepared or if we didn’t run them enough,” Rodriguez said. “And then we got to the meet that day, and they were just fresh and jumping around and happy, and we’re loose. They did very well.”

Berrien Springs – the MHSAA/Applebee’s “Team of the Month” for June – capped its season that day with its first MHSAA Finals boys track & field championship.

The title also was the first for the school in any sport since 2006, when the Shamrocks’ baseball team won the Division 3 title.

“We weren’t big on trying to win every meet. We were just thinking, all right, let’s try to be healthy for that state meet. So we were kind of smart in how we handled things and just scheduled things out so we can peek at the right moment,” Rodriquez said. “And I think it’s kind of a gamble that made us all uneasy, but they were just on fire that day.”

The boys track & field team had finished LP Division 3 runner-up in 2018, its highest Finals finish since coming in second in 1953. But with enrollment lines driving downward the last many years, Berrien Springs found itself it a much different spot beginning in 2021. The Shamrocks went from one of the largest schools in Division 3 to one of the smallest – the 11th-smallest of 155 teams this season – in Division 2.

Still, Berrien Springs received a strong indication it could compete with anybody this season when it ran at an invitational April 29 in Warsaw, Ind., against a number of larger Indiana schools include state power Carmel. Senior Jamal Hailey won the 100 and 200 meters, the 400 relay finished second, and senior James York was third in high jump as the Shamrocks hung with competition similar to the best they’d see in Michigan this spring.

Berrien Springs also possessed the right strengths to succeed in a championship format. The Shamrocks won their Regional by 37.5 points May 20 in part because the sprint group took nine top-eight places in the 100, 200 and 400 and won the 400 and 800 relays. The same formula worked as they won the Berrien-Cass-St. Joseph Conference championship meet the next week.

With points spread out across several contenders, Berrien Springs’ 41 won the meet by eight.

Berrien Springs has had some recent success in other sports, particularly with Hailey leading a football team that went 10-1 last fall. This spring’s championship could be a catalyst for more Finals-level success in the near future across other sports.

“I hope so. I think that every kid that we had qualify (for the Finals) was a multi-sport athlete kid, and I think our 4x1(00) team, everybody on there was a three-sport athlete guy,” Rodriguez said. “Our athletic department works well, like our football guys lift with football two days a week and then come after track practice, so we have that nice working partnership with all the athletes.

“Now that we’ve shown that we can get there, I think it’s (shown) the kids at our school that hey, we can beat the bigger schools. We can hang. Track did it. Maybe we can do it next.”