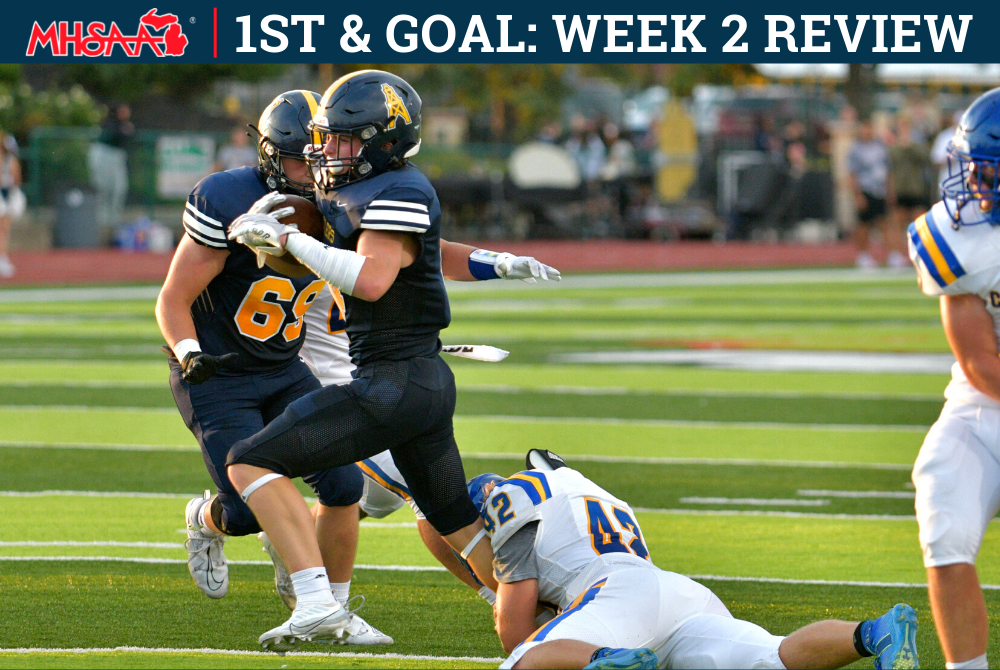 We don’t keep track of losing streaks at the MHSAA. But we’re plenty glad to celebrate teams after those streaks have been broken.

Holland West Ottawa and Litchfield surely are enjoying these first few weeks, as both have started the fall 2-0 after multiple seasons without a victory.

Theirs are among several potential turnaround stories beginning to be told, and we highlight more below as we review Week 2 across Michigan.

HEADLINER Lapeer 56, Traverse City Central 42 The Lightning (2-0) scored first and impressively on the road against last season’s Division 2 runner-up. Quarterback Zak Olejniczak ran for a touchdown and threw for seven more, including four scoring passes to Connor Brown. Although Central (1-1) went over 40 points for the second week in a row, Lapeer’s defense was the difference during the fourth quarter with two interceptions and a fumble recovery. Click for more from the Traverse City Record-Eagle.

Watch list Swartz Creek 36, Lake Fenton 14 The Dragons are 2-0 for the first time since 2018 and after starting 1-3 a year ago but still eventually making the playoffs. This win avenged a 13-0 loss to Lake Fenton (0-2) from last fall.

On the move Elkton-Pigeon-Bay Port Laker 39, Cass City 12 The Lakers (2-0) have opened with two commanding wins as they head into Greater Thumb Conference West play, while Cass City is 1-1 heading into GTC East action. Standish-Sterling 31, Ithaca 27 The Panthers (2-0) trailed throughout the first half before making their move during the second to earn a one-score win over Ithaca (1-1) for the second-straight season. Marlette 38, Unionville-Sebewaing 12 Marlette (2-0) last played USA in a 2020 playoff opener, and the Red Raiders hadn’t come within 40 of the Patriots (0-2) two of the three times they’d faced each other over the last seven seasons.

HEADLINER Clarkston 62, Southfield Arts & Technology 56 Southfield A&T (1-1) is becoming must-see football this fall – and that’s a strong vote of confidence for Clarkston after the Wolves held on to move to 1-1. Warriors quarterback Isaiah Marshall is up to nine touchdowns passing and five rushing over two games, but Clarkston running back Ethan Clark ran for four scores as the Wolves put up the game’s last points during the final minute to prevail. Click for more from the Oakland Press.

Clarkston senior Mike Hein with the go-ahead touchdown with 25 seconds to go in the 4th quarter as the Wolves beat Southfield A&T 62-56 on Thursday.

On the move Oxford 17, Birmingham Groves 14 On an emotion-filled night at Oxford, the Wildcats (1-1) opened their home schedule by defeating the No. 10 team in Division 2, sending the Falcons to 1-1. Detroit Catholic Central 44, Davison 34 The early hierarchy in Division 1 should see movement as Davison (1-1) was ranked No. 6 and DCC (1-1) was unranked before defeating the Cardinals for the second-straight season. Warren De La Salle Collegiate 49, Muskegon 16 These two have a combined seven appearances in MHSAA Finals over the last five seasons, which on its own to explains the heaviness of this matchup and significance of this win for the Pilots (2-0) over the Big Reds (1-1)

HEADLINER DeWitt 39, Portland 34 This has become one of the best games every fall in the Lansing area – this time DeWitt entered No. 2 in Division 3 and Portland was No. 4 in Division 5 – and the 2022 chapter was another classic. The Panthers (2-0) won for the first time in three recent matchups with the Raiders (1-1) as Elliott Larner took a handoff and found Bryce Kurncz on a 22-yard halfback pass for the game-winning score with 14 seconds to play. Click for more from the Lansing State Journal.

Watch list Durand 56, Montrose 52 The Railroaders have strung together three straight playoff seasons but have something extra to be excited about so far this fall. Durand (2-0) defeated Montrose (1-1) for the first time since 2009, perhaps the best win since the program’s turnaround got rolling after an 0-9 finish in 2017.

On the move East Lansing 28, Fenton 14 The Trojans (2-0) have loaded their nonleague slate again, and after posting one of Week 1’s most impressive debuts doubled up a Tigers team that also had opened in a big way. Mount Pleasant 51, Midland 29 The Oilers’ immediate schedule gets no easier with Cadillac and Traverse City Central over the next two weeks, but Mount Pleasant (2-0) has started as impressively as anyone in the Saginaw Valley League North as Midland (1-1) also was among the Week 1 high achievers. Williamston 22, Lansing Catholic 0 Although the Cougars (0-2) are off to a rough start, this remains a win over a reigning Finals champion for the Hornets (2-0). 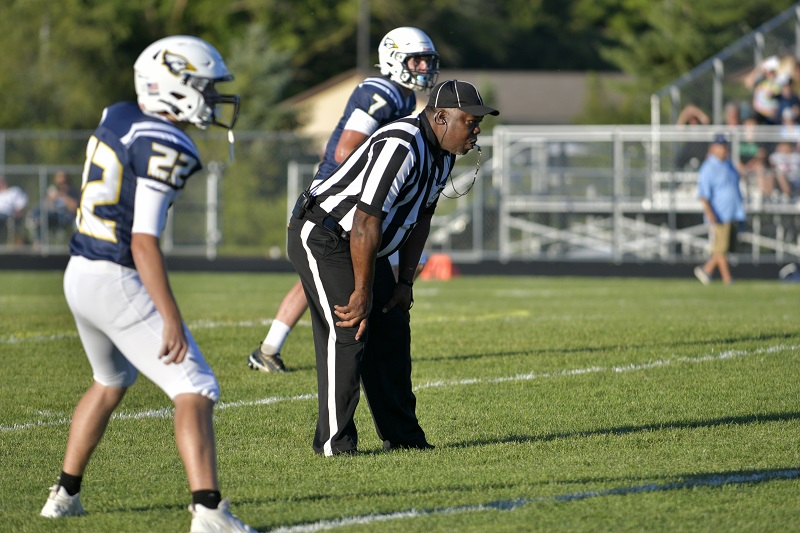 HEADLINER Gaylord 17, Kingsley 16 If Gaylord’s Week 1 one-point win over Lake Fenton turned a few heads, the encore against Kingsley (1-1) should have all of northern Michigan taking notice. At 2-0, Gaylord already has won as many games as it did any of the last three seasons – but getting the second victory this fall over a Stags team that had six losses total over the last four seasons gives this story some statewide spark. Click for more from the Petoskey News-Review.

Watch list Traverse City St. Francis 42, Jackson Lumen Christi 35 A matchup of 2021 Division 7 semifinalists played out like one, with the Gladiators winning the fourth quarter to move to 2-0 while sending Lumen Christi to 0-2, but with those losses to the Nos. 1 and 2 teams in the statewide rankings.

On the move Alpena 18, Marquette 16 The Wildcats (1-1) were 2-14 over their last two seasons but could be in for some major improvement after avenging last season’s 49-14 loss to Marquette (0-2). Maple City Glen Lake 34, Oscoda 28 The Lakers (1-1) bounced back from a disappointing opener to win a game that could come into play as the Northern Michigan Football League Legacy standings sort out. The Owls (1-1) should still have a part to play too over the next six weeks. Elk Rapids 20, East Jordan 13 The Elks (2-0) had won a high of two games over the past three seasons, and they’ve equaled that already with this one over a Red Devils program that’s 0-2 but went 6-3 a year ago.

HEADLINER Hudson 22, Constantine 20 The Tigers (2-0) ran their overall winning streak to 16 with one of the best regular-season victories of the run. Hudson trailed by 20 points late in the third quarter before coming all the way back against a Constantine program that had won 15 straight regular-season games and remains ranked No. 6 in Division 6. Hudson, last season’s Division 8 champion, is No. 3 in Division 7. Click for more from the Adrian Daily Telegram.

On the move Manchester 29, Addison 26 The Flying Dutchmen (2-0) followed up a solid win over Whitmore Lake in the opener by defeating three-time reigning Cascades Conference champion Addison (1-1) for the first time since 2016. Saline 35, Ann Arbor Huron 24 This matchup ended up deciding last season’s Southeastern Conference Red championship, and Saline (2-0) is off to the right start as it looks to repeat while Huron (0-2) is coming off losses against two potential Division 1 contenders. Hanover-Horton 27, Michigan Center 20 The Comets (1-1) have had a tough run over most of the last decade, but started Cascades play by defeating a Michigan Center team that’s 0-2 but made the Division 6 Semifinals last year. 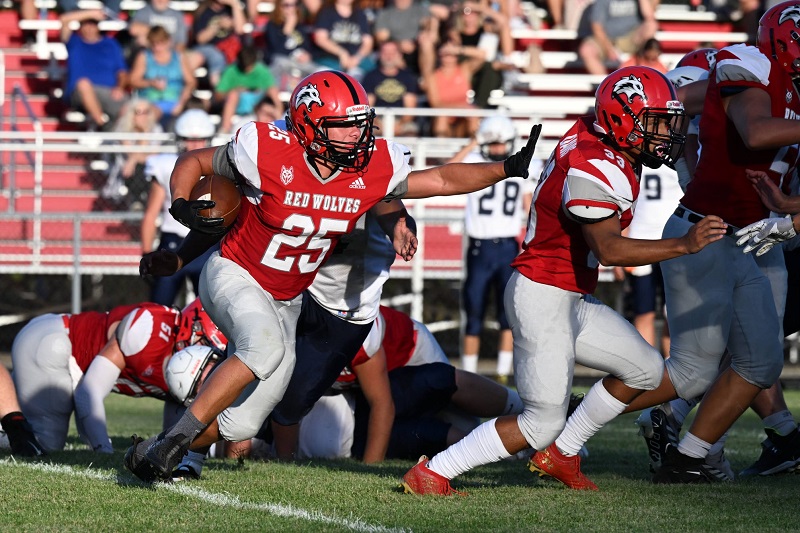 HEADLINER St. Joseph 41, Hudsonville Unity Christian 28 The Bears loaded their nonleague schedule with two opponents that finished the 2021 season at Ford Field. They opened by falling to last year’s Division 2 runner-up Traverse City Central, but came back from a double-digit deficit to claim this win over the reigning Division 4 runner-up. St. Joseph may be the favorite and is certain among the few entering Southwestern Michigan Athletic Conference play, while Unity (0-2) should still contend as well in the Ottawa-Kent Conference Blue after opening with a pair of losses to top competition. Click for more from the St. Joseph Herald-Palladium.

Watch list Kalamazoo Loy Norrix 8, Kalamazoo Central 7 The Knights (1-1) have struggled more than most over the last 10 seasons, but this was their first win since 2019 and first over rival Central since 2017.

On the move Kalamazoo United 33, Stevensville Lakeshore 27 The Titans (1-1) reversed last season’s 41-19 loss to Lakeshore (0-2) as it bounced back from a season-opening defeat to Berrien Springs. Niles 28, Buchanan 18 The Vikings (1-1) also bounced back from a season-opening loss to hand the Bucks (1-1) their first defeat. Schoolcraft 22, Centreville 2 It’s fair to say defense reigned but both should score some playoff points as these two go on to successful seasons. Schoolcraft improved to 2-0, and Centreville is 1-1.

HEADLINER Negaunee 40, Calumet 15 The Western Peninsula Athletic Conference Copper sent four teams to the playoffs last season. Negaunee was one and now has defeated two more, with Calumet also the reigning league co-champion. The victory over the Copper Kings (0-2) actually was the Miners’ second straight, and they don’t face the other co-champion Ishpeming Westwood until Week 9 – although Week 8 opponent Houghton also is making some noise at 2-0 and becoming one to watch in that league. Click for more from the Marquette Mining Journal.

Watch list St. Ignace 48, Johannesburg-Lewiston 0 The Saints (2-0) have worked through some tough seasons of late as well, winning a combined three games over the last two years. But they’re riding some momentum this time as the schedule begins getting tougher this week.

On the move Gladstone 34, Kingsford 20 The Braves (2-0) have simply impressed over their first two wins, this one over the reigning co-champion of the Great Northern Conference. Iron Mountain 34, Ishpeming Westwood 0 As noted above, Westwood (0-2) was a Copper co-champion last season, and Iron Mountain bounced back after falling Week 1 to Negaunee. Sault Ste. Marie 16, Grayling 7 The Blue Devils (2-0) had fallen 36-32 last season in their first NMFL Legends meeting with Grayling (1-0).

HEADLINER Rockford 31, Muskegon Mona Shores 27 The Rams (2-0) – No. 6 in Division 1 – came all the way back after trailing 20-0 late in the second quarter, as quarterback Mac VandenHout threw three touchdown passes including the go-ahead score 59 yards to Brody Thompson with 4:07 to play. Mona Shores, No. 4 in Division 2, moved to 1-1. Click for more from FOX 17.

Watch list East Kentwood 19, Bloomfield Hills Brother Rice 17 The Falcons (1-1) are playing for their first winning season since 2019 and looking strong after also opening with a close defeat against Muskegon. East Kentwood had lost to Brother Rice (0-2) last season 33-0.

On the move Grandville 45, Byron Center 27 That’s two weeks and two notable wins from the Bulldogs (2-0), who followed up a season-opening victory over Grand Blanc by defeating another 2021 playoff team in Byron Center (1-1). Holland West Ottawa 21, Portage Northern 10 The Panthers are 2-0 after bringing a 26-game losing streak into this season. Grand Rapids Christian 41, Fruitport 34 The Eagles (1-1) trailed by 27 points late in the first half before scoring the final 34 points of the game to get past the Trojans (1-1). 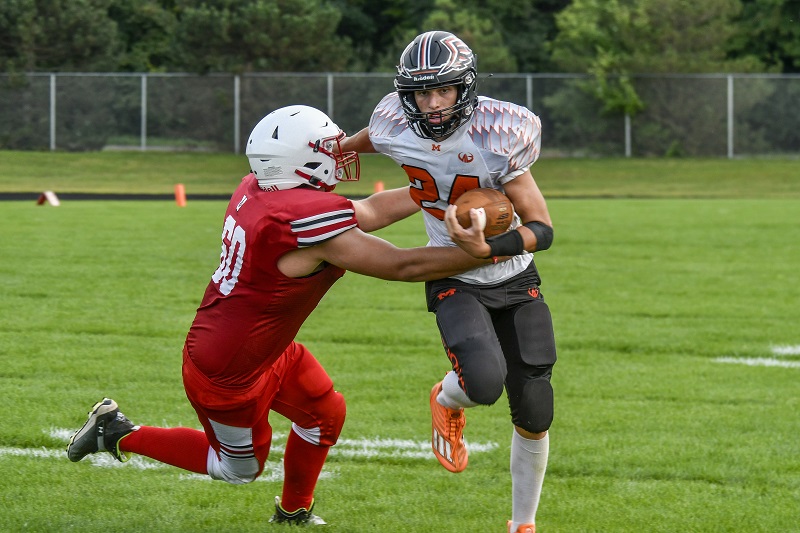 HEADLINER Litchfield 36, Burr Oak 14 The Terriers (2-0) are one of the best stories of the early going this season, opening with a pair of victories after losing 20 straight games from 2019-21. Litchfield hadn’t defeated Burr Oak (0-2) since 2011 and lost their matchup last season 44-22. Click for more from the Hillsdale Daily News.

Watch list Merrill 36, Breckenridge 14 This could end up developing into a great rivalry game, and Merrill (2-0) now owns a 1-0 lead in the 8-player series after Breckenridge (1-1) won their last four meetings as 11-player teams.

On the move Grand Rapids NorthPointe Christian 51, Indian River Inland Lakes 18 The Mustangs (2-0) are another team that has been especially impressive over the first two weeks, this time adding 51 points to the 65 they put up against Suttons Bay in the season opener. Inland Lakes (1-1) gave up that many only twice in going 10-1 last season. Pittsford 28, Camden-Frontier 6 The Wildcats (2-0) could quickly become contenders with their switch to 8-player, and they’ve looked good so far outscoring their first two opponents by a combined 78-6. Munising 14, Newberry 0 The Mustangs’ defense deserves plenty of praise after stopping a Newberry offense that scored 58 points last week and averaged 36 points per game a year ago.

PHOTOS (Top) A Mount Pleasant ball carrier works to pull away from a Midland defender during the Oilers' Week 2 win. (2) An official readies for a play during Sanford Meridian's 14-0 win over Shepherd. (3) Paw Paw runs the ball on the way to its first victory, 33-27 over Otsego. (4) A Morrice ball carrier pulls away during a 68-14 win over Vestaburg. (Top and photos 2 and 4 by High School Sports Scene; photo 3 by Gary Shook.)