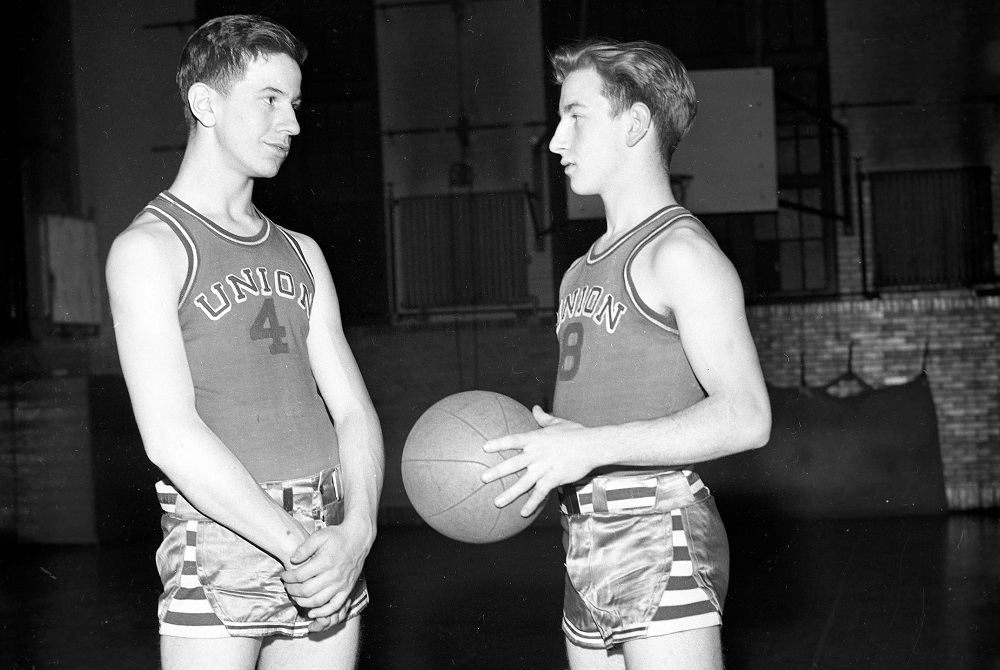 GRAND RAPIDS – Bob Schichtel always pauses when he comes across the ancient black and white photo long enough to ponder whatever became of the two youngsters adorned in Grand Rapids Union basketball uniforms.

The posed shot shows two players facing each other in a local gymnasium in a photo apparently taken four days after the Japanese surprise attack on Pearl Harbor in 1941 that launched the country into World War II. Only a handful of fans today would recognize the players' striped, ultra-short shots and simple sleeveless shirts with "Union" emblazed across the front as recognizable basketball uniforms. One holds a battered-looking basketball, while the other looks on. The two players, whose uniform numbers are "4" and "9," aren't really smiling, but still seem as close as any teammates, whether 81 years ago or today.

In fact, it's the look the youngsters share that intrigues Schichtel, whose thankless, pro bono job it is to identify the two players.

"Once you start," said Schichtel, a former longtime Grand Rapids basketball coach, "it's like looking down a deep rabbit hole." 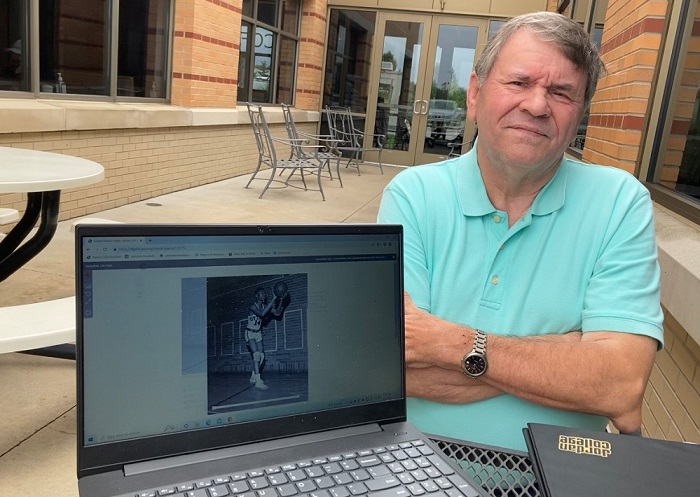 Schichtel works as a volunteer for the Grand Rapids Public Library trying to identify mostly former Grand Rapids City League basketball players from approximately 1938 through the early fifties. The online photos are mostly from the Robinson Photo Studio Collection taken in conjunction with the Grand Rapids Herald newspaper. The library says the unique collection spans some 950 basketball negatives from the entire Robinson/Herald collection that totals well over 900,000 Grand Rapids photos.

While the work – which amounts to a ton of patience combined with a detective ability – can be exhausting, it's still what Schichtel describes as a labor of love. For example, there's the shot of the two still-unidentified Union players. Schichtel looks at the photo and can't help but wonder whatever happened to the kids. Were they exceptional athletes? Did they leave their marks on Grand Rapids history, whether it was in education, politics, business, industry, the arts or another field? He doesn't even know, as in many photos from this era, whether the two entered the military and thus even survived World War II.

Schichtel has searched everywhere for the answers, but has come up short. Too many times, in fact.

Which isn't to say he'll quit looking or chalk up his research as inconsequential. Schichtel said the foremost reason he spends hours on the project is that many of the athletes he identifies deserve the recognition for achievements far beyond basketball. In many cases former City League basketball, football, baseball, track and tennis athletes became the foundation on which Grand Rapids was built. If Schichtel can uncover an old photo which depicts these youngsters during their high school careers, so much the better, he said.

"It's important to recognize Grand Rapids sports history, and I don't know if we've given enough attention to their past," Schichtel said. "They are what got us here, and I'm a firm believer they need to be recognized for it."

Figuring out that history, however, ranges from, at the least, extremely time consuming to – in too many frustrating cases – virtually impossible. The City League was formed in the late 1920s and featured original schools Grand Rapids Central, Creston, South, Union, Ottawa Hills, Catholic Central and Davis Tech. The league was eventually folded into the Ottawa-Kent Conference in 2008.

"It was a long, evolving league," Schichtel said. 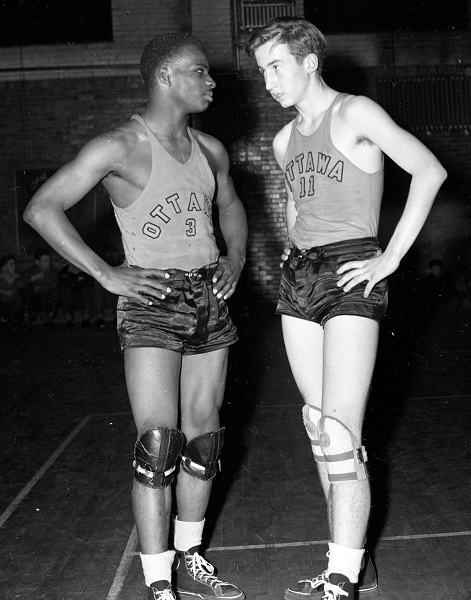 The identification tools available to Schichtel are actually more numerous than most would suspect. For starters, he's formed an impressive database of information by pouring through old City League yearbooks and programs, photos from other collections and microfilm of old newspapers, And then there's also the knowledge gathered by Schichtel himself, a 1968 Grand Rapids Catholic Central graduate. After playing in many old City League gymnasiums, Schichtel went on to compile a 389-197 record in 27 years as the Cougars girls basketball coach. He uses countless City League contacts as both a player and coach to identify athletes. In all, Schichtel taught in the Grand Rapids school system for 34 years.

He also uses the game itself to identify the photos. For instance, he can pinpoint some photos simply by the styles of the uniforms worn by players. He also figures out who is who by other clues such as what the players are doing in the photo. If a player is taking a set shot in the photo, it's likely pre-World War II. The beginnings of the jump shot, or what Schichtel calls "elevation while shooting," is probably mid-1940s. In addition, Schichtel can identify photos through pure basketball athleticism. Players can look a bit awkward in shots from the thirties as compared to players from the late 1940s who were beginning to play with a more obvious flare.

Put all the information together and Schichtel, who has uncovered more than two dozen personal connections to subjects in the photos, believes he has a reasonable shot at identifying them.

Since he signed on with the project, Schichtel figures he's identified about 10 percent of the photos he's viewed. Among the City League athletes he's found shots of Central's John Lavan, who was born in 1890 and played Major League Baseball during the Babe Ruth era and became a military hero who is buried in Arlington National Cemetery; Creston basketball player Roger Wilkins, an assistant United States attorney general during the Watergate hearings; Art Spoelstra of Godwin, a former NBA player and member of the Grand Rapids Hall of Fame; and Grand Rapids native Bill Cutler, who turned a chance post-World War II meeting with then-American League president Will Harridge into a position as commissioner of the Pacific Coast League,

Schichtel said gaining information through photos on the people who became the bedrock of Grand Rapids should be celebrated.

"I think it's a great approach for the community; they shouldn't be forgotten," Schichtel said. "Who else is going to do this? Why do I do it? I see a certain, for lack of a better word, a nobility. These kids played for the love of game, and they became the “Greatest Generation.” These kids did great things. It's not just, 'Well, there's No. 58,’ in a photo.

"You want to know more about them. That's the real intrigue for me." 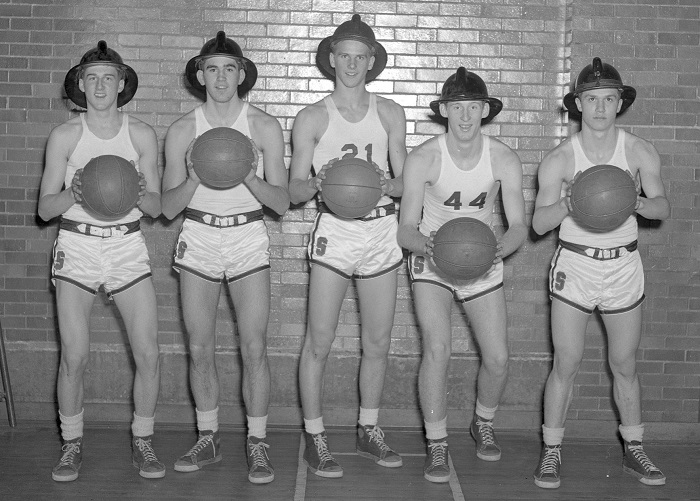 Tim Gloege of the Grand Rapids Public Library said the collection of photos – and their identification – is continually growing. As more people log onto the library's website, more people want to either add to the collection or have information that leads to an identification. The library estimates about 1,200 photos are searched monthly. But as time grows, many of the original photos are disintegrating. The library is in a constant state of preservation, Gloege said.

"It's a massive project, and we're working to get as many photos online as possible," he said. "The numbers (of photos) we have are rising pretty significantly as people post them on social media.

"When you think of the past and now, you need to realize these are people, kids who used to play basketball and did other things. The work is hard and very time-intensive, but it brings a whole new dimension to history."

Schichtel said he's "kind of picked the low-hanging fruit" on many of the easy photos to identify. But the work will continue.

"Yes, it can be frustrating," he said. "There are limitations if you want it to be accurate. Sometimes you look at a photo and you know it's not going to happen, and you move on. But this a chance to learn about people who made Grand Rapids what it is. That's important to me."