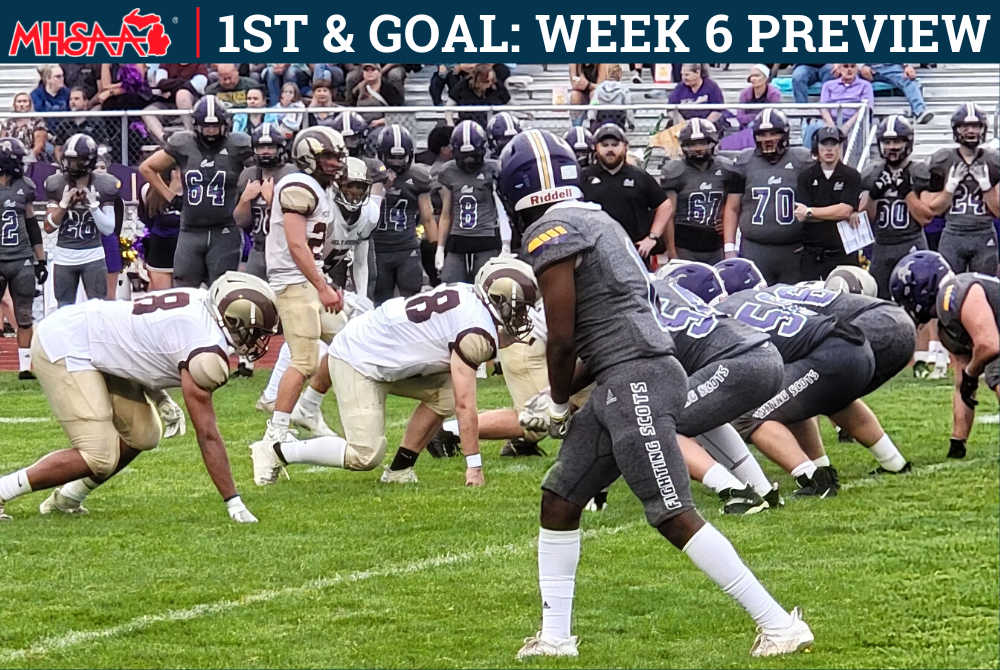 Many Michigan football league play right through the end of the regular season, although often league championships are decided by power-packed matchups in Weeks 6, 7 or 8.

This Week 6 is shaping up as perhaps the week that may most shape the 2022 regular season.

A number of eventual conference champions could be decided tonight – some surely by the eight matchups of teams entering the weekend both 5-0.

MLS quietly has been dominating this season, with its 233 points only 24 shy of the team’s total over nine games last season. While three wins have come against teams that remain without a victory, a fourth was 43-32 over Marine City Cardinal Mooney, which leads the Detroit Catholic League Intersectional 2. MLS’s next two games – this one against Nouvel and next week against Ithaca – should be similarly tough and will decide if the Cardinals will claim the Tri-Valley Conference 10-2 title, which would be their first league championship since their most recent overall winning season in 2019. Nouvel’s only loss was to Ithaca in Week 3.

Every season this game means something, and this season it’s likely to again determine the Detroit Catholic League Central title. DCC went undefeated in Central play to win the league championship in 2020, but relinquished it to the Pilots last season as De La Salle downed the Shamrocks 17-7 in what ended up the title decider. Both teams have done serious work over the first five weeks this fall. DCC came back from a season-opening loss to Clinton Township Chippewa Valley with wins over Davison, DeWitt, Detroit U-D Jesuit and Bloomfield Hills Brother Rice by two points. De La Salle’s only loss was by a point to Rice, and the Pilots own wins over Detroit Renaissance, Muskegon, Jesuit and Orchard Lake St. Mary’s.

This could be Charlotte’s biggest game since 2008, when it shared the Capital Area Activities Conference Gold title with DeWitt and Haslett. A win over the Raiders would give the Orioles a share of the CAAC White championship – a nice jump after going 2-3 in league play last season. Charlotte has had only four overall winning seasons since 2008 but has all but guaranteed one this fall. Portland, meanwhile, is a five-point Week 2 loss from being undefeated and looking to take back the White after seeing a league title streak end at six last season.

Boyne City’s last league loss was to eventual champion Charlevoix in 2020. Charlevoix’s only league loss since 2019 was last year to eventual champion Boyne City. And that makes for a pretty solid rivalry as this matchup could again decide the Northern Michigan Football Conference Leaders title. Charlevoix hasn’t given up a point since opening night – with a 48-0 shutout of third-place Elk Rapids among the four straight. Boyne City won by forfeit last week but is barreling along at 46 points per game – making the Ramblers’ offense vs. the Rayders’ defense the matchup of the night.

Dundee football re-arrived on the scene in 2019 with its first playoff appearance since 2013, and the Vikings took it a step farther last season making the District Finals for the first time since 2011. A win this week would be another giant step, as Clinton has won nine or more games the last three seasons and continues to be a major contender in the Lenawee County Athletic Association. Clinton has won its first three league games this fall by a combined 137-13, and Dundee has given up only 20 points over its first three including against two of the same opponents.

These two are part of the inaugural Lakeland Conference, with Benton Harbor, Dowagiac and Niles Brandywine, and a win tonight would put Berrien Springs one away from earning the first league title (while a win combined with a Brandywine loss to Benton Harbor would give the Shamrocks a share of the championship). These two also are rivals from the former Berrien-Cass-St. Joseph Conference, and Berrien Springs has won six of the last seven meetings – but Buchanan already has more wins this fall than all of last season.

Iron Mountain is up to No. 3 in Division 8 playoff-point average, ahead of four undefeated teams thanks to that lone loss coming to unbeaten Division 6 Negaunee. But Calumet has been a bit of a thorn during a strong five-year run by the Mountaineers, winning two of three meetings on the field since Iron Mountain joined the Western Peninsula Athletic Conference in 2018. The Copper Kings won last year’s matchup 21-6 and have picked up three straight wins (one a forfeit) this fall since opening the season with losses to Negaunee and Gladstone – arguably the two best teams in the Upper Peninsula.

Grand Rapids Catholic Central’s 41-game winning streak may face one of its toughest challenges yet – and that’s saying something as the Cougars defeated South Christian by only a point in 2020 and have won three straight Division 4 or 5 Finals. GRCC already has outlasted Ada Forest Hills Eastern and held on against Cedar Springs to defeat the latter by a point. But the Sailors have yet to play a game closer than 22 points – that one a 28-6 win over Cedar Springs – and have given up only 33 points on the year.

This almost assuredly will end up deciding the Central Michigan 8-Man Football Conference championship, as these two sit atop the standings and two games ahead of four more teams tied for third. Merrill is ranked No. 4 in Division 1, and Morrice is No. 6 in Division 2, and neither has faced a massive challenge yet – the closest game for both was a 22-point win over Breckenridge. Morrice has been among standard-setters in 8-player, with a combined 46-4 record over the last five seasons. But Merrill appears on the verge of joining the elite coming off its first win over annual power Portland St. Patrick since moving to 8-player in 2020.