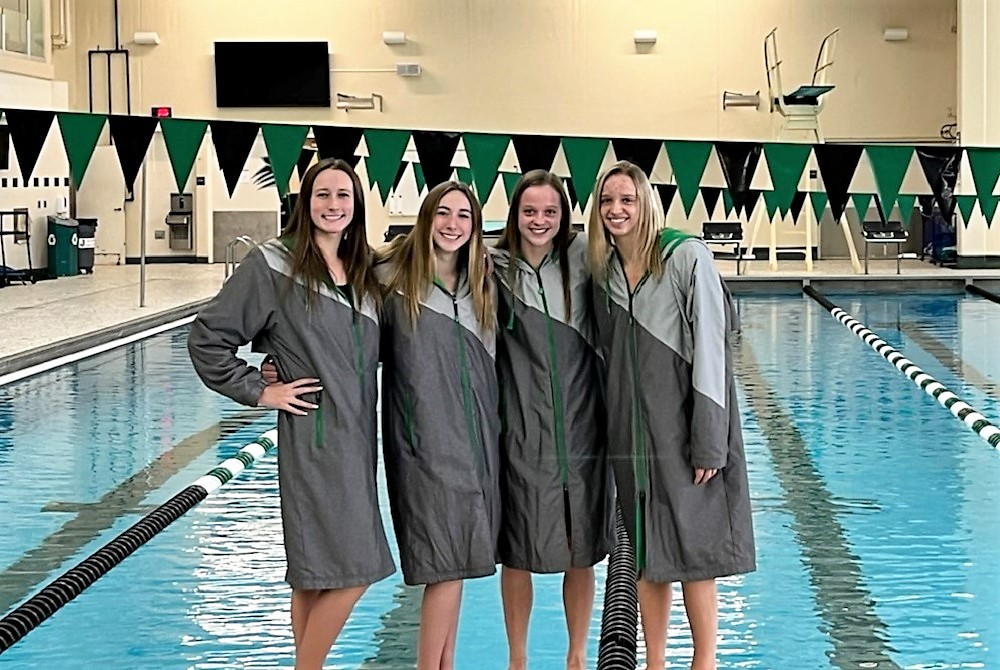 At Jenison, two pairs of talented sisters have been making two last names stand out.

The Albrecht sisters, Grace and Emma, and the Umstead sisters, Sophia and Layla, have combined this season to lead the Wildcats’ swimming & diving team with record-breaking performances.

The quartet recently set a school record in the 200-yard medley relay. They blazed a winning time of 1 minute, 44.34 seconds at the MISCA Meet, held at Calvin College.

“Our fastest relay has been with those girls together, so it’s been two pairs of sisters just swimming fast,” Jenison swim coach Kyle Stumpf said. “It’s been cool watching these two sister groups kind of work with each other and support each other.

“They all have different personalities, so it’s fun to see that play out at practice.”

Grace Albrecht, a junior, is the oldest of the talented group and has experienced the most success by winning a pair of MHSAA Finals championships.

She won a Lower Peninsula Division 2 title in the 50 freestyle as a freshman and then repeated last season by tying Ann Arbor Skyline’s Claire Kozma. Both girls swam identical times of 23.94.

Albrecht has been even better this season, and posted a personal-best time of 23.37 at the MISCA Meet.

“For me, it’s more about having fun and enjoying the process,” she said. “Working hard and getting better every day, that’s my goal.”

She also has enjoyed swimming with her younger sister for the first time in high school.

Emma Albrecht is only a freshman, but has posted several fast times as well.

“We’ve been swimming together since we were young girls, and we’ve gotten to know each other so well with every car ride to school and to and from meets and practices,” Grace Albrecht said. “We are like best friends now, and we just motivate and encourage each other every day. It’s been a good experience.” 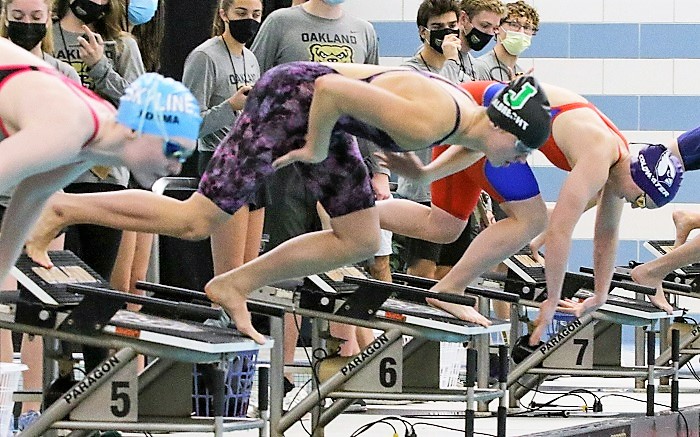 Sophia Umstead, a sophomore, is swimming in high school for the first time after being a part of a club team.

She’s also embraced the opportunity to swim alongside her freshman sibling.

“It’s really fun swimming with Layla, and I enjoy it because in club we don’t always swim together,” said Sophia Umstead, who set a pool record and school record at the MISCA Meet in the 200 individual medley with a time of 2:00.52, while also establishing a school record in the 100 breaststroke (1:02.17).

“All of us sisters get along well, and I love them all. Our personalities are different, but when it comes to swimming we are all very similar with our goals and how we want to be successful in the sport.”

The sisters became well acquainted while competing in club at a young age.

“We’ve known each other since we were little girls, and we’re all great friends,” Grace Albrecht said. “It’s definitely been a cool experience.”

“They have been performing at a high level for a number of years, and they have high expectations,” he said. “They train together and are always pushing each other. They all have different strengths, and it’s been a pleasure to be on the deck coaching them.”

Stumpf has been coaching Grace Albrecht since before high school and has marveled at her vast improvement.

“It’s been quite remarkable to watch how far she has come,” he said. “She is one who has high standards for herself and her teammates, and she leads by example. She pushes herself every single practice, and the results speak for themselves.”

Jenison had its best Finals team finish two years ago when it finished fifth in LPD2, and this team has the potential to achieve similar results.

“It’s definitely a group that is learning as we go, and we’ve gotten better as the season has progressed in terms of supporting each other, lifting each other up and pushing each other,” Stumpf said. “I’m really looking forward to seeing what our team can do at the conference meet in three weeks and then at the state meet. I think we are going to perform well.”

Sophia Umstead also is looking forward to the postseason.

“It's been a different experience than club, but I really like this team and it’s been a very fun experience so far,” she said. “I think we can swim very well at the conference meet as a team, and I think we could get top three in the state. I’m excited to see how it’s going to go.”