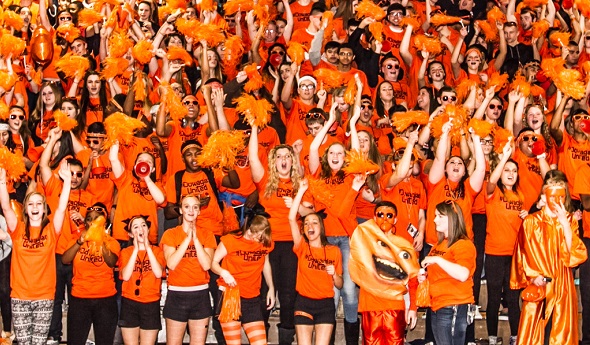 Sydney Brooks always has taken pride in her town, even as classmates talked about how there was nothing to do in Dowagiac and how they couldn’t wait to leave when high school was done.

Turns out there’s a lot of fun to be had in her school’s corner of the southwestern Lower Peninsula, and it’s come full circle for the “Attack” – Dowagiac’s student section and this season’s MHSAA Battle of the Fans IV champion.

Dowagiac’s success was accomplished in steps – starting with the formation of the “Chieftain Heart” spirit club three years ago, then the establishment of a “Front Row Crew” last year to get the Attack in Battle of the Fans shape.

This winter, that heart beat stronger than ever, not just in the stands at high school basketball games, but throughout the entire community.

The Attack will accept its MHSAA championship banner during the 6 p.m. Class B Boys Basketball Semifinal on March 27 at Michigan State University’s Breslin Center. The other four finalists also will be invited to Breslin to receive rewards for this season’s achievement.

Dowagiac was chosen based on a vote by the MHSAA’s 16-member Student Advisory Council influenced by public vote on the MHSAA’s Facebook, Twitter and Instagram sites. A total of 22,673 social media votes were received, with those results then equated against a school’s enrollment.

The Council based its vote on the following criteria: positive sportsmanship, student body participation, school spirit, originality of cheers, organization of the group, section leadership and overall fun.

Dowagiac and then Buchanan received the majority of public social media support, finishing among the top three in all four ways votes were accepted (Facebook likes and shares, Twitter re-tweets and Instagram likes). Some of the more interesting comments made on Second Half stories this week came from alumni of those schools, the oldest a graduate from 50 years ago.

Other numbers to consider from this season's contest: The application videos have been watched nearly 28,000 times, and the MHSAA-produced videos from our tour stops have more than 8,600 views. The stories on the five finalists plus Tuesday’s explanation of how to vote had been viewed 19,078 times as of 8:30 this morning.

This has been one of the coldest winters we can remember, but our Battle of the Fans finalists gave us warm welcomes the last five Friday nights. Here’s what we’ll remember most about each:

What we saw: The reigning champion hosted the first stop on this season’s finalists tour and reminded us why it won BOTF III with a packed gym and an almost identical group of student leaders who keyed the section’s rise in 2013-14. The Bleacher Creatures put their focus this winter on adding more fun to breaks in play, and had something entertaining lined up for every timeout. Tradition runs deep for a student section that got its start in 1979, and the Creatures supply plenty of fun for the rest of the fans in addition to support for a pair of varsity basketball teams that are a combined 39-2.

Why we’re fans: Starting with the “Beaver Slide,” through the “Parting of the Red Sea” and a dunk into a mini hoop over 6-foot-8 athletic director Ryan Roberts, the Creatures always gave us something to watch. They do their part by amping up the party in the stands to go with the strong basketball being played on the floor. They’ve mastered the ability to bring together an entire student body and continue to set an example for creativity – their ideas no doubt will be picked up by other sections heading into 2015-16 and beyond.

What we saw: The Herd made its third straight BOTF Finals and continues to be held in highest regard all over this state – and in some cases, by schools outside Michigan that have learned of Buchanan’s success in rallying students all the way to its elementary buildings. “The Woods” once again was filled for our visit, with students doing what has drawn admiration these last few years – cheering hard for their classmates on the floor and having a blast during breaks. The halftime rendition of “High School Musical” is an all-time highlight of the contest’s four-year history.

Why we’re fans: What more can be said? No section in Michigan has served as a stronger ambassador for how a strong student section can change the culture of not just a school, but an entire community. No other section in Michigan is referred to as often by schools trying to create the same. We see Buchanan’s influences on schools not only from their southwest corner, but all over the state. The Herd may not have won BOTF for a second time in three years, but Buchanan certainly has made its mark, again – and created something we hope continues for years to come.

What we saw: A new way for this school’s enthusiastic students to support their teams – and positive energy that’s just starting to boil. St. Johns was our largest finalist this season, and represented as such filling a corner of its gym to the top row for the 6 p.m. boys game and with most of the students staying for the start of the girls game played after. Despite a 12-point loss by the boys team, St. Johns fans stayed engaged throughout, with help from the band, cheerleaders and dance team – and showed us a few things we hadn’t seen before, including a nice take on the sport of curling and a full student body domino fall that started at center court.

Why we’re fans: We’ve heard a lot of transformation stories over the last four years, but St. Johns’ student leaders have had one of the tougher goes since forming their Student Athletic Leadership Committee three years ago. Athletic directors can take a lot of steps to get the ball rolling – and in this case, Chris Ervin sent leaders to the last two MHSAA Sportsmanship Summits and provided plenty of support. But the battle for a strong student cheering section is often won in a school’s hallways, where leaders must convince their classmates to buy in. St. Johns’ leaders considered giving up before a breakthrough this winter – and we’re glad they kept up the good fight.

What we saw: It’s more what we heard – a collective roar so loud it left a noticeable fuzziness in our ears when the game was done. More than 400 students whipped a quarter of Yale’s gym into a game-long frenzy that no doubt would make playing in front of Kohler’s Krazies (named in honor of boys basketball coach Garnett Kohler) a tougher task than merely trying to stand up to a team that is 15-1 this season. The Krazies added in some nice backflips and a superintendent-led roller coaster during breaks in play – but those and other sideshows were merely to keep the crowd’s attention and not meant to become the main event.

Why we’re fans: The sheer power of this section knocked us back – in a good way. The first fans for a varsity doubleheader began showing at 4:30 p.m. for a 6 p.m. opening tip, and that’s the kind of passion we’ll always cheer on. But the best part was learning how the Krazies, over only a few months this winter, have turned their student body into a tighter-knit community, and then extended that effort to the community of Yale as a whole by incorporating adults into their cheers and raising money to help out a few of the town’s less fortunate.

Battle of the Fans champion: Dowagiac

What we saw: Wow. The vision of hundreds of orange-clad Dowagiac fans bouncing back and forth as the school’s flag was waved is something we won’t forget. The Attack wore shirts printed with “Dowagiac United,” and there’s little that’s more impressive than watching a large group of fans organized and following its leaders en masse – while adding a ton to an already intense game atmosphere. Like BOTF’s champions past, Dowagiac’s section just looks like the fun place to be. The teachers are involved. The band is involved. The elementary schools made videos to join in the fun. The city office made a video showing its support. The Attack is certainly catchy – and we’ve bought in as well.

Why we’re fans: We appreciate how much work has been done to build school spirit over the last three years, and could feel the buzz immediately after walking in the front door. Dowagiac’s student leaders have been pounding on the door, figuratively speaking, and the student section this year is proof they finally pushed through. The sea of orange shirts was not an optical illusion Friday; the gym was filled to its 1,100 fan capacity, with the band and adults across from the students helping to form a blanket of “Dowagiac United” at the doors. And again, that’s not just a slogan; students from the “Front Row Crew” all the way to the top of the stands stayed engaged despite their team getting up by a big margin early, were impressively together on whatever chants the leaders started, and were joined by many of the adults as they enjoyed a booming soundtrack from the band and English teacher Dustin Cornelius, the Attack advisor and also game deejay. Students may have complained a few years ago about having nothing in town to do; now they’ve got plenty of opportunities, along with the rest of their community, to join in something special.

What we found in Dowagiac is what all of our BOTF champions have had in common: All four created atmospheres that anyone entering the gym would want to join.

In fact, that can be said about all five of this season’s BOTF finalists – and once again, clips from all five MHSAA tour stops will be shown on the main scoreboard during the Girls and Boys Basketball Finals in March at the Breslin Center.

We continue to cheer on these students sections as we learn how much their work has helped other schools transform not just their bleachers, but life in the hallways as well. During each of the last three Battles of the Fans, we’ve heard of how new sections learned from those that have competed before them, either at Sportsmanship Summits or by watching the videos from the first years of the contest. Buchanan and Beaverton can both enjoy assists on Dowagiac’s championship this winter – the Attack certainly gained input from their regional neighbor’s example, and leaders showed last year’s Beaverton video to the entire student body when getting this season’s section of the ground.

But in the end, Dowagiac’s leaders still had to take everything they’d learned not just from others but from their own experiences of trial and error to arrive at this point. This Battle of the Fans championship is one reward – but only a highlight from what an entire community can take pride in every game night.

Battle of the Fans IV is sponsored in part by Milk Means More.

Click to check out our stories and videos behind the finalists. Also, click to see student-produced videos from all sections that entered the contest. (Photo courtesy of Scott Rose.)