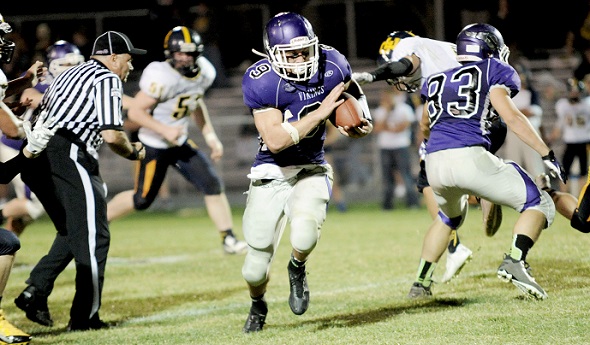 And he became one of the most accomplished running backs in Michigan high school history despite playing only three varsity seasons.

Grace’s 7,551 career rushing yards rank third in MHSAA history, only 880 yards behind record-holder Kevin Grady of East Grand Rapids – although Grady played 51 games over four seasons and Grace played only 36 games from 2012-14. Grace also finished with 102 rushing touchdowns, trailing only the 114 scored by Livonia Clarenceville’s Tim Shaw, who played in 11 more games during his career from 1998-2001.

Grace already held the single-season rushing record with 2,962 yards over 12 games as a junior, and set another record with eight straight games of at least 200 yards rushing during his final season. His 23 straight 100-yard games rank third on that list – Grace failed to reach 100 yards in only two games, both as a sophomore.

Grace, who will begin his college career this fall at Western Michigan University, also finished eighth with 616 career points, fourth with 102 career total touchdowns (rushing, receiving, etc. combined), and his 812 career carries are sixth on that list. He spent his freshman season cheering on his brother Jonathan, who ran for 1,790 yards and 21 touchdowns as Swan Valley’s lead back.

Click for the football record book in full and see below for more recent additions to MHSAA record listings (click on the sport heading to see those respective record books).

PHOTO: Swan Valley's Alex Grace finds an opening in the Ovid-Elsie defense during a game last season against the Marauders. (Click to see more from HighSchoolSportsScene.com).