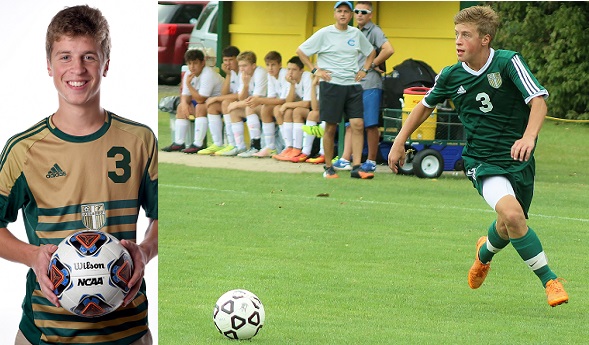 For the second straight season this past fall, Monroe St. Mary Catholic Central sophomore Zachary Cepo tallied 48 assists – tying the MHSAA record he set in 2016 as a freshman.

He’s also put together a career-full of assists – with two more years to play.

His 96 career assists already rank fifth all-time, and Cepo also finished 2017 with 71 points to push his career total in that category to 129.

See below for more recent record book updates in boys and girls soccer and softball, and click on the sport headings to view those record books in full.

Comstock’s Evan Veenhuis earned four entries for his work in the fall, starting with six goals in his team’s win over Niles Brandywine on Sept. 13. Veenhuis also was added for 52 goals and 62 points over 22 games, and he’s on the career points list as well with 121 over his first three years on varsity and with one more to play.

Brooklyn Columbia Central junior Micah Sonnenberg added a pair of season and career entries to his previous two for goals in a game from 2016. Sonnenberg had 45 goals this past fall to make the single-season list, and his 101 goals are on the career list with one more season to play. He also had 60 points in the fall and has 130 total to make the season and career lists, respectively, in that category.

Cadillac’s Alexus Little capped her three-year varsity career last spring with a pair of goal-scoring entries. Her 35 goals in 2017 made the single-season list, as did her career total of 80 from 2015-17. She finished with 111 points total.

A trio of Vicksburg four-year standouts graduated last spring with their accomplishments all over the MHSAA record book. Shaidan Knapp capped her career with 13 entries, including for 247 runs scored (fifth all-time), 234 hits, 63 doubles (10th all-time), 20 triples, 25 home runs, 173 RBI and 95 walks drawn. Teammate Carlie Kudary was added for her 189 runs and 223 career hits, plus a 37-game hitting streak in 2016 that is tied for fifth longest in MHSAA history. Grace Stock made career lists with 179 runs, 224 hits, 55 doubles and 195 RBI – those RBI rank 11th all-time. Knapp is continuing her career at Central Michigan University, while Kudary is playing at University of Missouri-St. Louis and Stock is playing at Calvin College.

Mattawan celebrated the final campaign for three record-setting four-year seniors last spring with one of the most impressive offensive runs in MHSAA history. The Wildcats, who finished 32-8 in 2017, set an MHSAA record with 126 doubles, while their 492 hits total ranked 10th, their 46 home runs ranked sixth, their 348 RBI came in ninth and their .437 batting average is tied for ninth all-time. Joanna Bartz, Alexis Taube and Meaghan Markus left their marks all over the records as well. Bartz had 75 hits and 22 doubles last season and 229 hits, 54 doubles, 29 home runs and 194 RBI over her career. Taube had 71 hits, 20 doubles and 13 homers last season and 42 doubles, 30 homers and 164 RBI for her career. Markus had 41 doubles and 23 homers over her career to go with a single-season 11 home runs in 2016. Junior Emily Koperdak also was added for her 21 doubles last spring. Bartz is now playing at Michigan State, with Taube at Kent State.

Byron’s Parker Viele capped her career last spring with five record book entries, including for 56 career doubles and 29 career triples over 143 games. She also had two single-season marks for doubles and another for career pitching strikeouts. She’s playing at Lake Erie College in Ohio.

Ann Arbor Gabriel Richard’s Julia Kennedy has entered her senior season this spring with 33 career home runs, 16 off the record, and with a career-high of 18 as a sophomore in 2016. Her total that season is tied for sixth-highest in one season, and she’s already tied for 15th on the career list. She will continue her career after high school at Miami University (Ohio).