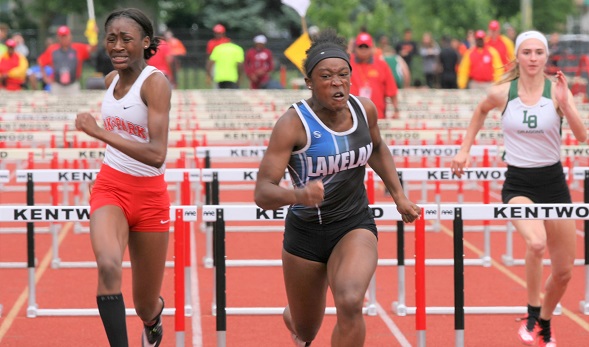 We will say good-bye to a number of graduating champions at Saturday’s MHSAA Girls Track & Field Finals.

But it’s hard to not also be excited about some of the final legacy-making opportunities for outgoing seniors – and new chances to shine for a group of impressive rising athletes taking their places among the elite.

Below is a look at some of the teams and individuals to watch at Saturday’s girls meets. All events begin at 9 a.m. local time on both peninsulas.

Click for meet information including all qualifiers. Check out MHSAA.tv for live streaming of running events from both peninsulas, available with subscription and beginning at 10 a.m., and come back Saturday night for results as they come in and coverage of all seven meets on Second Half.

Oak Park is the reigning champion and has won four of the last five titles in LPD1, also finishing runner-up in 2017. With contenders in nearly every running event, the Knights may be the favorites again. But keep an eye on Detroit Renaissance and Rockford, both also loaded with star power. Rockford was the runner-up last season, 6.5 points off the lead, while Renaissance finished sixth.

Detroit Renaissance’s Kaila Jackson: A star already as a freshman, she could cap her first season with multiple titles entering with the second-fastest LPD1 Regional time in the 100 (11.98) and fastest in the 200 (24.37) plus as part of the fastest 400 and 800 relays.

Oak Park’s Aasia Laurencin: The champion in the 200 and runner-up in the 100 hurdles in 2018, Laurencin is one of many standouts for Oak Park (freshman Chloe Vines, sophomore Nysha Jordan and juniors Jayla Jones and N’Stajah Banks are perhaps the other most notable of numerous title contenders) and enters this weekend with the second-fastest LPD1 Regional time in the 100 hurdles (14.22), sixth-fastest in the 100 dash (12.23), fifth-fastest in the 200 (24.83) and as part of the second-fastest 800 relay.

White Lake Lakeland’s Grace Stark: The star sprinter and hurdler will try to cap her high school career with one more title after winning the 100 dash and 100 hurdles last season. She enters this weekend with the fastest LPD1 Regional time in that hurdles race (13.84) by more than three tenths of a second after setting the LPD1 Finals record in the event last year at 13.16.

Lake Orion’s Melissa Symons: After winning the 300 hurdles last season by nearly a second, the Dragons’ senior had the second-fastest LPD1 Regional time in that race (43.72) and third-fastest in the 100 hurdles (14.26) after also taking fourth in that event in 2018.

Zeeland East broke through last season for its first MHSAA Finals championship in this sport after finishing runner-up in 2017, and could be in the mix again of a closely-contested team race. Frankenmuth, Corunna, Saginaw and most of all Holland Christian also have the elite star power to make a run at the team title.

Allendale’s Brianna Bredeweg: After winning pole vault last season as a sophomore, Bredeweg enters with the highest LPD2 Regional vault (11-10) by 10 inches. She set the meet record last year at 12-7.

Marysville’s Kaia Scheffler: After taking fourth in the 300 and seventh in the 100 hurdles last season as a sophomore, Scheffler will be aiming for her first titles entering with the top LPD2 Regional times in both races, 46.33 and 14.52 seconds, respectively.

Bridgeport’s Payten Williams: The Bearcats’ sprint star swept the 100 and 200 last season and will run for a repeat in the 100 (12.73) and as part of Bridgeport’s contending 400 relay. Freshman teammate Chaniya Madison will be among her top competition in the 100, entering with the fastest LPD2 Regional time of 12.18.

Including last year’s co-champions St. Charles and Hart, six teams have claimed the overall title over the last five seasons. Pewamo-Westphalia last won in 2015 (and also 2013) and might be the favorite again – but watch especially for Shepherd, along with Quincy, St. Charles and Jackson Lumen Christi among many others.

Hart’s Adelyn Ackley: One of the state’s all-time great distance champions, Ackley will run her final high school races after claiming 3,200 titles last season and in 2016 and the last three LPD3 cross country championships. She enters this weekend with the third-fastest LPD3 Regional time in the 3,200 (10:57.22), fourth-fastest in the 1,600 (5:07.48) and running on a contending 3,200 relay.

Byron’s Sarah Marvin: The third-place finisher in both the shot put and discus as a freshman, she has the top LPD3 Regional throws in both by significant margins at 41-10.5 and 128-10, respectively.

Farwell’s Jenna Odykirk: The reigning champion in the 100 enters her last Finals with the fifth-fastest LPD3 Regional time in that race (tied – 12.90) and also should contend for a place in the 200 (26.91).

Onsted’s McKenna Russell: The standout junior hurdler will run three relays and only one individual race, the 300 hurdles. She won it in 2018 and enters with the second-fastest LPD3 Regional time (47.17) after finishing second two weeks ago to Quincy’s Madelyn Allman.

Muskegon Western Michigan Christian’s Abby VanderKooi: Considered by many the next great Michigan high school distance runner, the freshman had the best LPD3 Regional time in the 3,200 (10:36.17) by more than 18 seconds.

Fowler has taken turns winning or finishing second the last four seasons, but coming off last year’s title could be in line for a repeat this time. Pittsford is the reigning runner-up and should be right there again, with Mount Pleasant Sacred Heart and Addison among other interesting possibilities.

Addison’s Ally McLouth: The Panthers’ standout could pile up points entering with the best long jump (17-2.5) from LPD4 Regionals plus the fastest 300 hurdles time (44.94) and second-fastest in the 100 hurdles (15.32). She finished second in long jump and third in the 300 as a sophomore a year ago.

Hillsdale Academy’s Katie VanHavel: The reigning long jump champion had the second-best leap to McLouth in all of LPD4 at their Regional two weeks ago (16-7). She’ll also run on two relays including a contender in the 800 to finish up her high school career.

UP Division 1 at Kingsford

Negaunee broke Marquette’s seven-year hold on the UPD1 championship last season, outpacing the Redettes by 25.5 points. Both enter as Regional champions Saturday and appear nearly even on paper. Side note: The winners of all but one individual event in 2018 will be competing again this weekend. 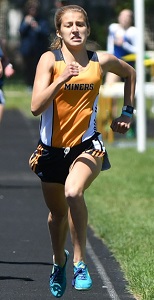 Houghton’s Lilly Baker: The reigning pole vault champion tied with two others for the top vault at the UPD1 Regionals with an 8-6.

UP Division 2 at Kingsford

St. Ignace has won two straight UP Division 2 championship and three of the last five, and appears to be the team to chase again Saturday. The Saints won last season’s title by 70 points.

St. Ignace’s Heather Lamb: The reigning long jump champion will go for the repeat as a junior entering with the farthest UPD2 Regional jump (15-9.5) by nearly 18 inches.

Manistique’s Ashley McDonald: Last season’s pole vault champion as a junior could finish up high school in a big way, entering with the best UPD2 Regional vault (8-6) by a foot plus as part of the fastest 1,600 and 3,200 relays.

Iron River West Iron County’s Jordan Shamion: After taking third in both hurdles races as a freshman, she enters this weekend with the top UPD2 Regional time in the 100 hurdles (17.40) and second-fastest in the 300 (51.51).

UP Division 3 at Kingsford

Lake Linden-Hubbell has won the last two UPD3 championships, last season’s by 33 points ahead of runner-up North Dickinson. The Nordics look capable of giving a major push Saturday, and watch out as well for relay-strong Rock Mid-Peninsula.

Lake Linden-Hubbell’s Jamie Hendrickson: She’s won the high jump and two relay titles both of her first two seasons of high school. Hendrickson enters with weekend with a UPD3 Regional-best high jump of 5-0, third-best long jump of 14-7, fifth-best 400 of 1:06.72 and as part of the top 1,600 relay.

PHOTOS: (Top) Oak Park’s Aasia Laurencin and White Lake Lakeland’s Grace Stark push through the finish of the 100-meter hurdles race at last season’s LPD1 Finals, as Stark set a meet record in the race. (Middle) Negaunee’s Emily Paupore breaks down the stretch during one of her three UPD1 championship wins in 2018. (Click to see more from RunMichigan.com.)