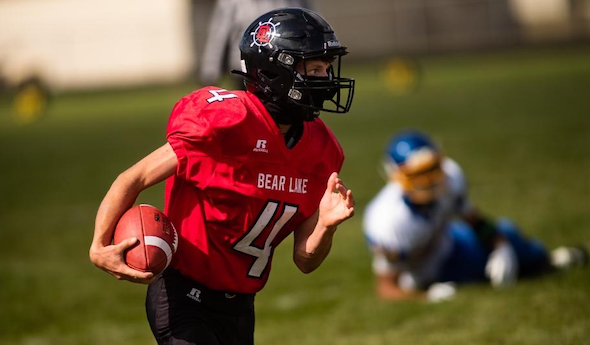 When Bear Lake takes steps on the football field at Brethren tonight, the Lakers have a chance they never had last fall.

It’s a chance to win two games in a row and remain undefeated. Bear Lake is coming off a 26-6 win over Ashley last week, the Lakers’ first win since 2018. The victory sparked a lot of relief and a great celebration in the Bear Lake community.

“It was a long time coming,” said assistant coach and offensive coordinator Samantha Mullet. “Seeing the guys get to experience the results of all their hard work was rewarding.

“But it’s just the beginning,” she continued. “They’ve set the bar now. They know that feeling only comes if you’ve earned it.”

Mullet, who goes by Sam and Coach Sam, has been an assistant coach with head coach John Prokes since 8-player football began at Bear Lake four seasons ago. She was also an intern the summer of 2019 for the Baltimore Ravens and coach John Harbaugh.

The Lakers’ seniors who have played football since their freshman year are thrilled to take the field tonight. Wins have been hard to come by and they were 0-9 in 2019. COVID-19 nearly took away their chance to play football in 2020 and feel the jubilation of victory.

It was long, hard summer of training not knowing the future of all MHSAA sports. The Lakers’ last victory was 28-18 over Big Rapids Crossroads Academy during the 2018 campaign.

“Participating in sports is one opportunity that provides our young adults with an experience that will only continue to help them with the trials and tribulations throughout their own life,” noted Prokes, who also teaches science in the middle and high school. “We are fortunate to have football at our school and in our community.

“The memories we've established will last well beyond the wins and losses.” 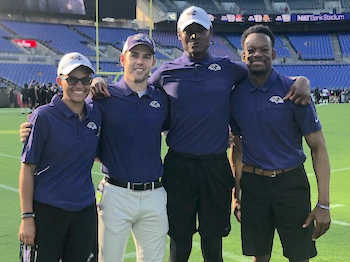 Mullet and Prokes have been together since Bear Lake exited a football co-op with Onekama to start the exciting 8-player football option. It hasn’t been a smooth road, but both feel the ship is righted now and the future is bright.

“The cool thing was the community stepped up and the board made a commitment to football,” she said.  “They took a chance and it paid off.

“These two coaches have given hundreds and thousands of hours to these kids,” she continued. “Taking it from nothing to where it is today is great!”

A new culture of football began this summer as training for a possible 2020 season began. Not knowing how COVID-19 would impact MHSAA sports, the Lakers embarked on significant changes.

“With students having been out of school and away from each other since March, we felt it was important to get the kids together and active again, even if it was just for socially-distanced outdoor workouts,” recalled Mullet.  “They were really the shift from there – they showed up and worked hard day after day, even when the future of sports was uncertain.

“Their attitude and commitment made us realize this could be the group to really establish our program,” she continued.  “We’d been building, but without much of an identity. These guys committed to defining the vague ‘success’ we’ve always talked about and hashed out exactly how things were going to go down – what would be required of everyone and what would not be tolerated of anyone.”

The Lakers took their name and turned it into a “LAKES” acronym for core qualities that all players and coaches must be – Loyal, Accountable, Knowledgeable, Excellent, Resilient, and Selfless. 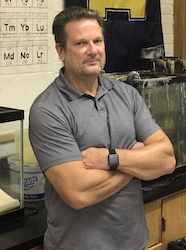 The Lakers’ new creed and culture also came with new helmets featuring improved safety components to start the season. The helmets were made possible by a grant from the Manistee County Community Foundation.

“We are not the biggest team, by no means,” Prokes said after the Bears snapped their losing streak. “We’ll probably be outsized in every game we play, but we play with a lot of heart.

“Our guys aren’t going to back down from anybody.”

And, when they walk on the field for every practice and tonight’s game, each player must contribute, Mullet believes.

“Every single player has been instrumental in pushing our culture forward,” she said. “As our creed implies, if one person doesn’t do their job, doesn’t give 100 percent effort, doesn’t buy in, the whole team fails.

“You may only have one job, but that one job is critical to the success of the whole team.”

Prokes and Mullet are appreciative of tremendous support they've received from everyone in the Bear Lake community, especially the boosters.

“The town has really embraced the team and has shown nothing but encouragement and patience with our development,” Mullet said. “They've enjoyed the experience that comes with having a football program including the tailgating, Friday Night lights, and even Saturday afternoons.”

And every Laker tonight will be playing with an undefeated helmet.