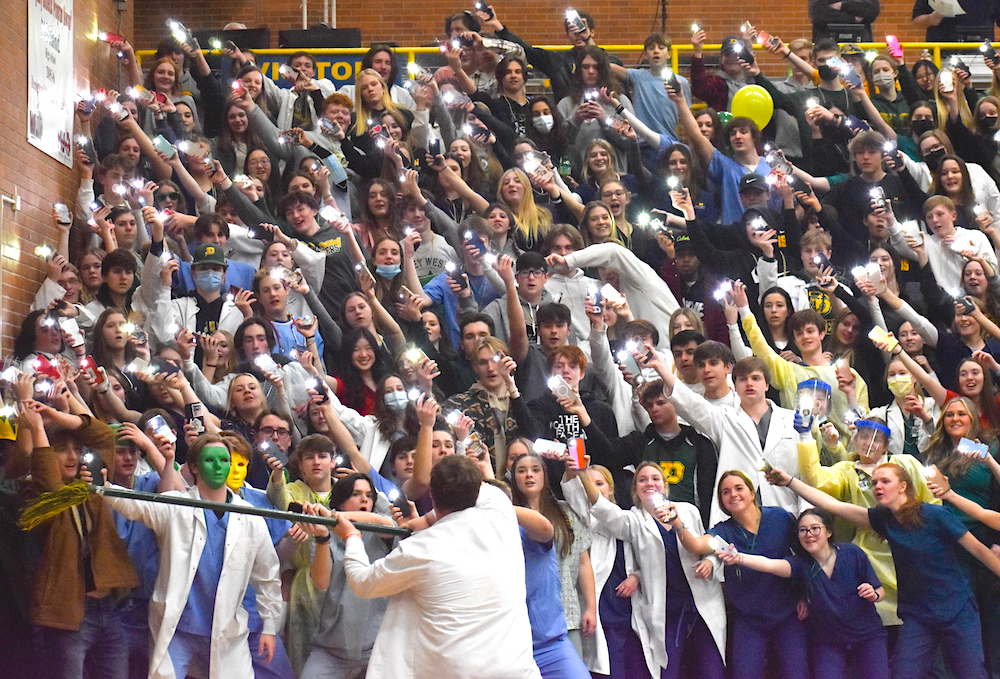 MIDLAND – The 10th MHSAA “Battle of the Fans” – and first after a COVID-induced pause for 2021 – appropriately started Friday with a never-seen-before experience.

Midland Dow’s student section mostly makes its presence known at “Herb’s House” – the unofficial name of the Chargers’ gymnasium. But Dow hit the road, traveling four miles southeast to rival Midland High for the first of this year’s three finalists visits – the first time a section has ever hosted the MHSAA staff and Student Advisory Council at an away game.

“We want to show up and be the best student section at their school,” Dow senior Daniel Watkins said. “That’s always the best thing ever.

“We bring the same energy. If nothing else, (the road game) almost feeds it more. Not only is it against our rival, but we’re at their place.”

This year’s BOTF X finalists tour also will include visits to Buchanan and Traverse City West.

Below is our highlight reel and 10 “X Factors” from our first stop with Dow’s student section.

As noted, Dow’s section traveled to rival Midland High, which packed its own student cheering section to match. Dow students dressed in scrubs and lab coats for a “Doctors & Nurses” theme and collected money during halftime to buy snacks for the local hospital emergency room staff.

While a Dow student section has existed for years, a number of factors lined up well for this to be the section’s first applying for Battle of the Fans – and making the championship round. A focused group of leaders was eager to get to work after spectator limits kept crowds small during 2020-21.

Every year four seniors – two girls and two boys – take over leadership. Those four leaders then select the next year’s leaders, to be announced at an assembly at the end of the school year. This year’s are Watkins, Kourtney Fischer, Abby Rey and Nolan Sanders. “We know the qualities a section leader needs to have, and we’re picking someone we know can handle the job and go the extra mile,” Rey said. “We make sure they’re driven, because it’s not an easy job – sometimes you just want to go to the game, but you have a bigger responsibility. And obviously someone who can communicate, especially with administrators.” 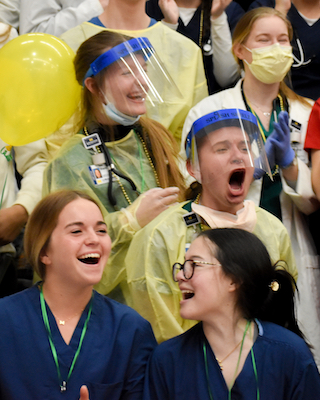 4. Believe in the Spirit Stick

At least since 2014 – when it started appearing in yearbook photos – a Spirit Stick has been the instrument used by leaders to direct the section. The stick is green – and recently repainted – and also recently busted after one end broke off during that hockey game. But section leaders claim it’s still got plenty of magic – when a ball falls out of bounds their way, they make sure the pompom end of the stick sprinkles a little Charger spirit on it before putting it back in play. “It’s powerful, really,” Watkins said. “It changes games.”

With an enrollment of nearly 1,300 students, getting a couple hundred to big games is a goal. Section leaders knew there was potential when the section showed in force for the football season opener at University of Michigan – which kicked off at noon on the first Friday of the school year. Despite being on the road this past Friday, nearly 150 students showed for the boys basketball game against the Chemics.

Without argument, the biggest driver of Dow’s student section strength this year has been the addition of dedicated social media channels. Putting out announcements and themes on Instagram spreads the word, as those posts become part of students’ stories and get passed along quickly. Senior Kimberly Douglas puts together video and the section started a TikTok as well.

Dow’s goal is to affect the game’s outcome – it’s that simple. All four leaders are athletes and know the confidence boost the section can provide. “We just want to be the turning point,” said Sanders, who plays hockey, baseball and runs track. “To allow our sports teams to get the closest to a win as possible … like a sixth man on the court, to help get those extra points. It’s important to understand that we’re not on the court, but we can have a say (in the result).”

Dow is part of the Saginaw Valley League, which stretches from Lapeer to Mount Pleasant and makes rallying the section for frequent two-hour road trips difficult. So the section focuses on home events – and not just football and basketball. Watkins would rush from football practice to lead the section during volleyball matches, and the section supported its boys soccer team in the fall and is big at hockey. 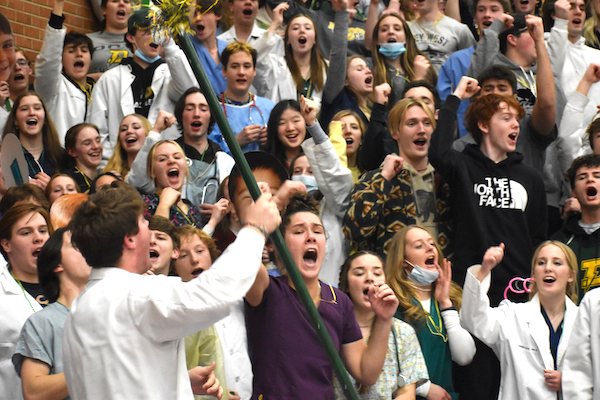 The section drives attendance by taking sporting events up a level in terms of fan participation. That has included some significant setup for football games; before the game against Midland this fall, Fischer and Rey built enough shakers – two solo cups taped together with corn inside – to fill six garbage bags. “Toga” and “Grandma & Grandpa” have been among popular themes, and they expect a big turnout for tonight’s boys basketball game “Teddy Bear Toss” with stuffed animals to be donated to a children’s hospital.

Behavior can go south during a rivalry game. Friday’s was a perfect example of how it doesn’t have to do so. While there was plenty of responding to each other’s cheers, it was basically some friendly back and forth and there wasn’t a hint of negativity coming from either side. For Dow’s leaders, cheering is more about giving their teams confidence – they don’t like booing, they don’t do the “who cares” during pregame introductions and they don’t tear opponents down. “That’s the way we do things,” Rey said. “It’s always positive. (Our students) respect that; they know that. They should be cheering out there for our team, and nothing else.”

The Battle of the Fans X finalists tour will resume Friday at Buchanan and conclude Feb. 8 at Traverse City West, with the champion announced Feb. 18.