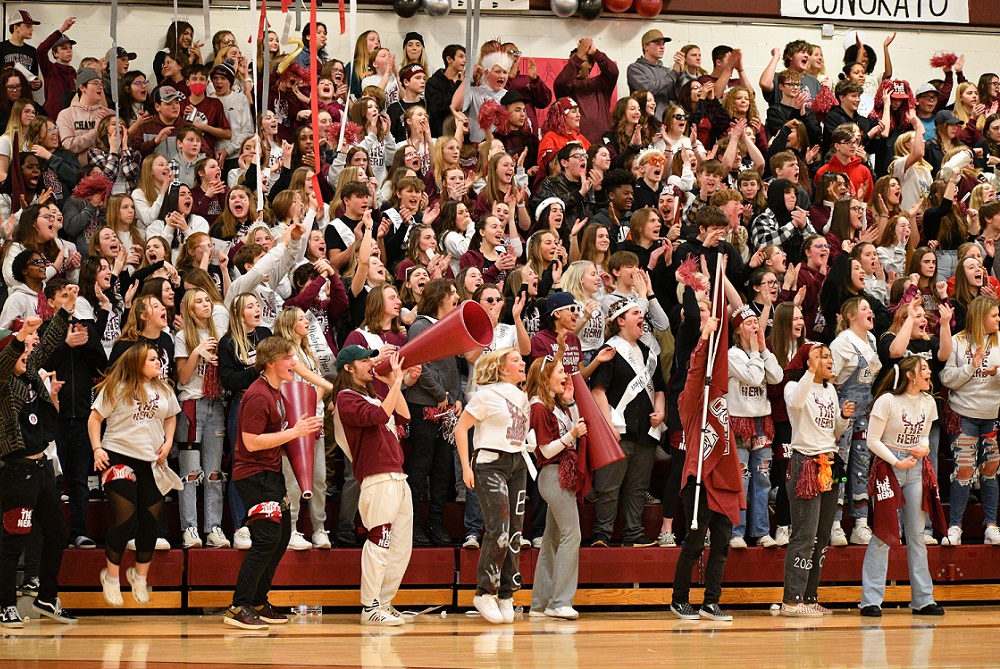 BUCHANAN – Nick McKean doesn’t recall why he pulled classmate Shawn Tucker from the bleachers down to the front of Buchanan’s cheering section during a football game this fall.

They knew each other, but weren’t really friends at that point. Six months later, McKean just remembers thinking it would be fun. But the magnitude of the opportunity sank into Tucker’s recollection much more heavily.

“He grabbed me,” Tucker recalled last week,” and changed my senior year.”

Over the last decade, Buchanan High School’s “Herd” has established itself statewide as an example of prime student section culture. The Bucks have won the MHSAA’s Battle of the Fans three times, and Buchanan’s appearance in this year’s BOTF X Finals is its fourth-straight and seventh overall in the championship round. The Herd has served as a teaching example for how student sections can organize, grow and transform a school – and Tucker’s experience has been among the latest examples of the good that results from that work.

“This year was just completely different for me,” Tucker said. “It’s so much fun; it’s hard to explain. Getting to help lead the chants, being up front at games, it’s an experience you can’t recreate in a different way.”

We caught up with The Herd for Friday’s home boys basketball game against South Haven, the MHSAA’s second of three visits as part of this year’s BOTF finalists tour. Midland Dow hosted the first Jan. 28, and the final visit will be at Traverse City West on Feb. 8.

Below is our highlight reel and 10 “X Factors” from our trip to Buchanan.

Friday’s visit coincided with the culmination of Buchanan’s “Winterfest” week. Activities included the crowning of class representatives between the girls and boys varsity games and a collection taken up to assist with medical bills for a student suffering through a tough bout with COVID-19. This also would be the seventh win of a current eight-game streak for the boys basketball team.

Anyone who has witnessed a Buchanan basketball game over the last decade would have recognized the “Welcome to the Woods” and “B-U-C-K-S Bucks” chants and the dance mashup among familiar Herd activities. With seven BOTF finalists appearances, there’s a lot of Herd video out there – and current leaders have watched for ideas that while old are new to them. 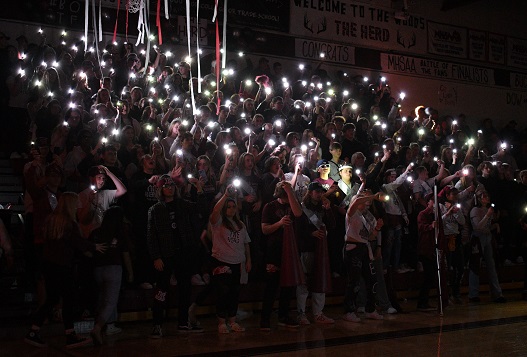 Two years of COVID-19 – and especially 2020-21 with spectator limits – forced current leaders (almost exclusively seniors) immediately up front, without the usual buffer junior year to watch how everything works. But there was some benefit: “We started new and we’re growing different this time,” senior Brennen Weaver said. “We’ve always had The Herd, it’s here, but it’s like we cleared the white board and we’re now redrawing a new thing that’s starting.”

Current leaders were raised in this culture, which makes things easier to continue – but other schools can follow the same plan. The section is basically a “spirit team” that brings enthusiastic students together for regular planning meetings. There’s an upperclassmen-driven leadership structure, but input is supplied by students from all classes. The Herd from its start has made a priority of visiting Buchanan’s elementary and middle schools, teaching those students how to cheer and cultivating the next leaders. They work closely with three teacher advisors and the blessing of administration, and have made a point of becoming active in the community as well. All of it is mostly in the name of fun, and that keeps interest up – clearly, as about 170 students from a school of 380 filled the stands Friday.

The Herd always has taken pride is attending a variety of sports. But this year’s football cheering section surpassed all previous renditions. The Bucks also cheered on their classmates during a competitive cheer meet. They supported at cross country, wrestling, and even at a marching band competition in Detroit. And of course there are new themes to go with the ones that always get the rowdies excited.

Reader’s Digest named Buchanan exactly that for 2020, and while The Herd wasn’t mentioned in the feature on the community, there’s no doubt that strand is woven through the student section as well. Example: A “Mean Stinks” anti-bullying campaign incorporated into the 2014 Bucks section still is part of its message today. “I can’t imagine living or going anywhere else,” senior Macy Orphanidis said. “Buchanan is such a tight-knit community, and I love every single person here and I know everybody. It’s like my family now.”

The chant is basketball related, but the message is a way of cheering life. It’s all positive. And can be pretty simple: Earlier this season an opposing student section was cheering “air ball” and trying to get a Herd response, but instead was ignored. And the negativity from the other side stopped. “They have the energy,” senior Joy Kaltenbach said. “In sports a lot of times we naturally just get mad when something bad happens instead of being happy when something good happens. So I feel like they just need to redirect their energy.” 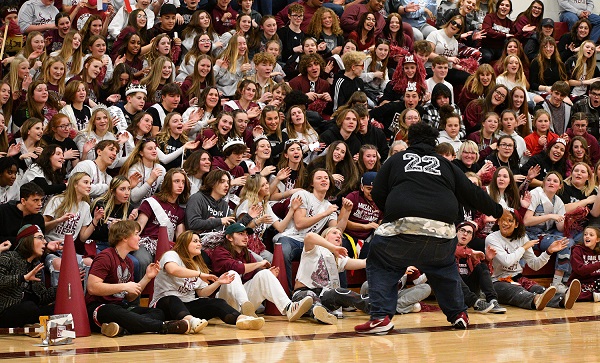 Another Herd tradition brought back this year is a halftime conga line, and on this night the Bucks got at least a handful of South Haven students to join in. During football season, McKean went across the field to the Niles student section and unsolicited led those students in a chant. It in part comes down to confidence. “Even if you’re not confident, you have to portray yourself as confident, because if you’re nervous they won’t listen to you,” McKean advised. “If you walk around with a lot of swagger holding that megaphone like a boss, they’ll listen to you.”

Every student section has the ingredients, starting with a leadership group filled with different personalities – some will want to focus on creating cheers, others themes or how to make the most noise. Involving variety also includes bringing in leaders from different sports, extracurricular activities and friend circles. Those representatives in turn will get more from their groups to take part.

10. The Herd Will Continue to Roam

That’s the end game. “I just want to teach (younger students) to stand out in their crowd and try to be their own leaders, so maybe that can be the ones who can be in the position we are,” Weaver said. “So they can give their energy and be the one providing all the loudness and fun cheers. (We want to) find those people who really embrace it and want to do more.”

The Battle of the Fans X finalists tour will conclude Tuesday at Traverse City West, with public voting on the MHSAA’s social media channels starting Feb. 15 and the champion announced Feb. 18.

PHOTOS (Top) Buchanan's "Herd" cheers during Friday's boys basketball win over South Haven. (Middle) Students shine their phone lights during pregame introductions. (Below) The Bucks follow their leader on a rollercoaster ride during a break in the game. (Photos by Jessica Elliott.)