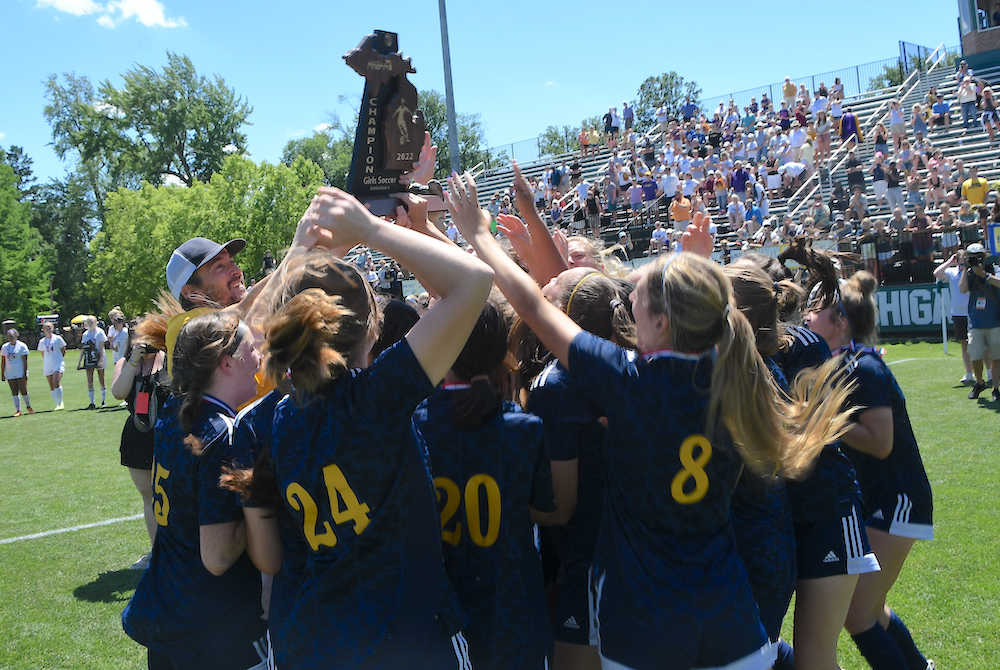 EAST LANSING – For Royal Oak Shrine Catholic, the disappointment of last year’s 5-0 Division 4 Soccer Final loss to North Muskegon now can be replaced with Friday’s impressive 1-0 shutout of Kalamazoo Christian at DeMartin Field on the campus of Michigan State.

After a scoreless first half, junior Norah Tisko scored 25 seconds into the second on a header to give the Knights (16-4-2) a 1-0 lead. It was her seventh goal of the season, with the assist going to Bridgette Drouillard.

“Yes, I had the finish, but it was our defense,’’ said Tisko. “Ava Gappy working it up the midfield and giving the ball to Julia (Bock), and Bridgette just giving me the most beautiful ball to execute. I really can’t take credit for it. We came into this year a little shaky. We lost some important seniors, but we had a great group of freshmen come in and step up. We were motivated to continue our run. Knowing we were coming back here was a little nervous, but we had confidence.’’

With nine shutouts coming into the Final, paced by sophomore goalkeeper Elena Gallagher, the Knights were used to shutting down opposing offenses.

It was a great 50th birthday present for coach Mark Soma. 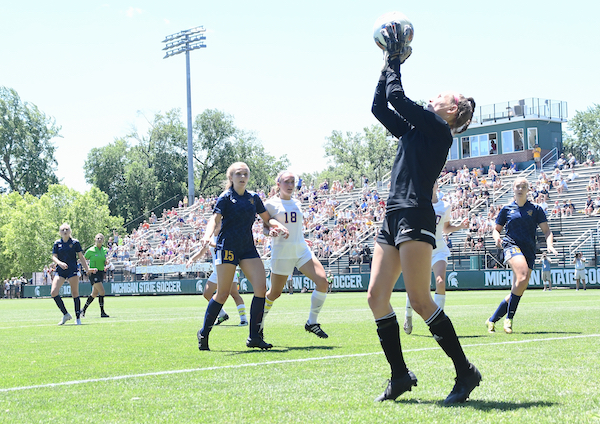 “Very nice, can’t beat the party,” said Soma. “We were good last year, but we lost to a better team in North Muskegon. They were a talented group, and they deserved to win. The girls that came back wanted another taste of what it felt like.”

Shrine had allowed just one goal during the playoffs, during a 9-1 victory over St. Joseph Our Lady of the Lake in the Regional Final. Friday saw the Knights’ sixth shutout of the tournament.

“It’s not just our D; it’s our team,’’ said Soma. “Sixteen girls worked hard today. That’s what we have done all season. We kind of caught them off guard on the goal.’’

Shrine was making their third straight appearance in the Final. Kalamazoo Christian, a four-time Finals champion, also previously finished runner-up in 2017, 2018 and 2019.

Gallagher finished the year with a goals-against average under 0.95.

“I totally rely on my defense; they are incredible,’’ said Gallagher. “I’m really close to all of them, so it’s like a bond on and off the field. There’s a lot of trust, so that works well for us. We are really great at communicating. We locked down as a team after the goal.’’

Drouillard, Jackie Lapoint and Claire Plaskey also were on the 2019 championship team.

The Comets (19-6) were on the attack most of the first half but couldn’t register a goal. Defense dominated the first 40 minutes as both sides had few scoring chances.

Annika Sytsma found one for Kalamazoo Christian with 1:13 to play in the half, but her shot went across the goal mouth and missed by inches.

“We were coming in with injuries, so we were trying to create different things,’’ said Comets coach Jay Allen. “It wasn’t meant to be today. We held (Tisko) for most of the game. She got loose once, and that was the difference. We were struggling to get that last step in there, but that’s soccer.

“We just couldn’t get a goal early, and this game is like that.”