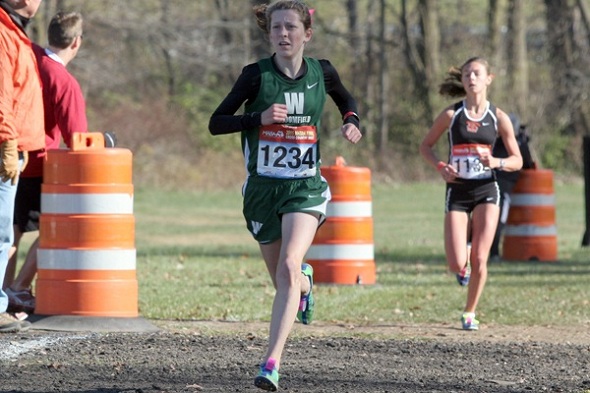 But it took a few more seconds Saturday to realize she’d actually done it.

Finn finished fourth as a sophomore, and didn’t run much as a freshman because of an injury.

“I finished the race and I was talking, and it was ‘OK, cool, it was a good race. I finished.’ And a couple of minutes after I was like, ‘Oh my gosh, I just won the state championship race.’ I’ve been dreaming about this since I could walk,” Finn said.

“I guess it’s just, how many times do you get to say that? You finish races and don’t think much of it. You think of your time, start thinking of cool down and everything. But this is it. This is it where all comes together. And it took a second to register that this is what I’ve been working on forever.”

Twins Hannah and Haley Meier were Grosse Pointe South’s top finishers at both the 2009 and 2010 Finals, as their team finished third and sixth overall, respectively.

“Haley was faster than me in seventh grade and the beginning of eighth grade, and Kelsie was faster than me too,” Hannah Meier said. “We always run together. We’re like sisters, even thought one is my sister. (Schwartz) pushes us too. “

Most elite runners at Saturday’s Finals were familiar with each other from racing over the years and especially this season.

He attended elementary school with Highland Milford sophomore Brian Kettle and junior Cody Snavely, who finished second and fifth, respectively, in the final Division 1 race of the year.

Not that that knowledge helped Zuk. But it definitely was a fun coincidence that those were two of the many he outlasted to claim the championship. The top six were separated by just 17 seconds, and Zuk purposely started out slower than the pack so he could surpass it at the end.

“I knew it was just all guts. There’s really nothing left,” Zuk said. “My legs were done. It was just keep moving forward. It was all I could do.”

Senior Paul Asum finished 13th for Milford to give that team an unbeatable group up front. The Mavericks finished with a score of 128, 44 fewer than runner-up Hartland.

“The fact that we could have three guys up front was really good. We have been very consistent,” Kettle said. “It was a great thing we were able to keep getting better and improving.”

From arguably the most competitive field of this season’s Finals, Bos emerged, running a 17:24.7 to edge Cedar Springs freshman Kenzie Weiler by 11 seconds. Wiersma and Schulist came in third and fourth, respectively.

“My coaches were telling me to kinda sit behind and let them block the wind, and make my move later on in the race. But I don’t really feel comfortable with that,” Bos said. “Because today especially, I could tell they were saving their energy because they know that’s what I do.

“So I thought I’d just take the lead right away and do something different. It was risky, but it turned out to be successful.”

“Our little motto is ‘Run as one,’ so we try to pack it up really strong,” Clark said. “Jessie Baloga and I are usually in the front leading, and we’re two seniors so that’s pretty cool. … We set the tone for the race.”

Chelsea senior Bryce Bradley and Mason’s team had little room for improvement after runner-up finishes in 2010.

Saturday, they both took the final step.

Bradley won the individual championship in 15:20.6, one second faster than Dearborn Divine Child senior Nicholas Soter. And the Bulldogs, who finished second to Grand Rapids Forest Hills Northern last season, finished with 92 points to clear the field by 37.

“We’ve been working for it for a really long time. To get it, it’s a real honor,” said Mason junior Tanner Hinkle, who finished fourth individually. “I think we just got a couple grades with some kids with talent and also the willingness to work. The combination of that, we got pretty lucky.”

Bradley had finished behind Hinkle at their regional after taking a wrong turn, but he was plenty familiar with the MIS course. He spent the entire summer preparing for this day, logging 950 miles – 290 more than he had before his junior season.

“Last year, I was actually hoping to be in the top 10. So finishing in second place was more than I hoped for,” Bradley said. “I was trying to not go down in places this year.”

Zach Zingsheim always has fashioned himself more of a track runner.

But that likely changed Saturday at MIS.

The Lansing Catholic senior relied on some of his middle distance track speed at the end – making his final kick at the 3-mile mark – and claimed the Division 3 boys individual championship in 15:48.2.

Zingsheim was nearly a minute faster than 2010, when he finished 23rd.

“I started running cross country in middle school. Cross country was the first thing I knew, but when I entered high school I found my niche in track,” Zingsheim said. “(But) I knew if we wanted to meet our goal of trying to win the state meet as a team, I needed to really improve.

“So this past summer, I worked even harder than ever. I became a distance runner.”

The Cougars fell just short of that team goal, finishing second to Grandville Calvin Christian for the second straight season.

The finish also was the Squires’ third-straight among the top two in Division 3. They were runners-up in 2009.

“Especially in training, it’s just nice to run with guys who are at the same talent level, who want to achieve the same things,” Kersjes said. “We’ve definitely stepped up our training as we’ve gotten older.”

BROOKLYN – Benzie Central seniors Theresa Warsecke and Amber Peabody remembered what it was like to win an MHSAA championship, having been freshmen when the team won three years ago.

They also knew what it was like to come close, with Benzie Central finishing third in 2009 and then second last season.

“Seeing how excited Hanover(-Horton) was last year, we wanted that again,” Warsecke said. “That just made us want it that much more again after getting second last year.”

The individual race was a little more open with Allendale and reigning Division 3 champion Ali Wiersma moving up to Division 2 this fall. Manistee senior Kelly Schubert ran with the opportunity, finishing in 17:58.6 to claim the individual championship by nearly 25 seconds.

She had finished seventh in 2010, and didn’t even know her time immediately after Saturday’s race – just that she kept pushing through the final mile.

“I was actually happy for once at the state meet,” Schubert said. “I’d been here sophomore year and junior year, and I was kinda disappointed both those years. I was hoping to do better. But this year I’m satisfied.

“I just decided not to worry about it, and just run because that what I like to do.”

But he was just the start for the Yellow Jackets. Four more teammates crossed among the top 25 individuals to

give Concord its second MHSAA championship in three seasons – and finish a 2011 season that included first places in every meet it ran.

“We’ve been working so hard for this moment. To have it all come together my last race is just amazing,” Nousain said. “When I win, I’m probably the only person on the team that’s happy. When the team wins, everyone is happy. And it’s just nice to see them be happy.”

Spencer Nousain’s individual success was the result of some trial and error. He said he overtrained as a freshman and sophomore, then undertrained as a junior. He prepared for this season just right – and let everything fly in his final race.

“I had nothing to lose. Might as well give it all I have, and that’s what I did,” Nousain said. “So it worked out perfectly.”

Olling won the first race of this season’s MHSAA Lower Peninsula Finals today at Michigan International Speedway, clearing the field by nearly 38 seconds with a winning time of 18:02.7.

Olling was hoping to break 17 minutes. But despite a slow first mile and no one to push her after that, she still cut seven seconds from her 2010 finish.

“I thought I would be more nervous last year than this year, but I think I was more nervous this year. This year ... everyone was aiming for me,” Olling said. “It just means that there is more of a target on my back now.”

Senior Alexa Rumsey finished third overall and best for Hesperia, which saw all five of its scoring runners finish among the individual top 25. Four of those five scored at last season's final as well.

"Our top competition was North Muskegon, and we raced against them before and we beat them every time. I knew they were close to us though, so I knew we had to work really hard, but we did," Rumsey said. "It was tougher the first one (in 2010). There defintiely was a lot more pressure this time. We just did everything the same, worked hard and tried not to worry about it too much."