We’ve completed our Battle of the Fans statewide tour for 2016, and hopefully you’ve kept up with our visits and learned why our five finalists are candidates to be known as the state’s top high school student section.

But we appreciate as well the great student sections that entered the contest and weren’t chosen this time for the finalists tour. We try to teach sportsmanship and the best way to support your local teams – but all of our applicants taught us something again this winter.

Here’s a look at what we learned from the 17 student sections who didn’t make the BOTF Finals, but should be celebrated as well:

Ann Arbor Gabriel Richard’s video took us through five years of its student section. The Fighting Irish were a BOTF finalist in 2013, and the section brings a strong effort every year although a new class of students joins each fall and a veteran group of leaders graduate each spring. Longevity and doing it right earns a lot of respect – not only from us, but surely in the community as well as the section has become such a prominent and positive part of student life at the school.

The Saginaw Michigan Lutheran Seminary student section was represented in a local contest last year by a photo of a few students sitting in the bleachers. Things had to change. Driven by the student council and a league Sportsmanship Summit, the Superfans were born – in fact, superfan became a verb to mean taking part. They’re off to a great start.

Wyoming Godwin Heights’ “Fred’s Fanatic Fans” also got their start this year as part of the Promote Enthusiastic Price (P.E.P.) Club, which was created to cheer on the school’s teams and “build the right climate.” We couldn’t have described the right goal better ourselves.

St. Johns was a finalist in 2015 even as leaders were still working to sway the entire student body toward a new, positive way of thinking and cheering. That movement continued to pay off this year; the Redwings were back, bigger and better, and we were glad to see it.

Big Rapids has a few more than 600 students, but we could count at least 150 making up a rowdy crowd at a number of events used in the application video. Everything we could see pointed toward what has to be a blast in the stands. 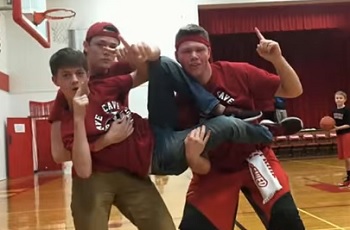 Fulton literally spelled out its drive on the screen: “Small Town, Small Teams, Big Hearts, Big Dreams.” The school has 200 students – and like finalist Munising, showed it can be done, filling the stands for a variety of games used in the video.

Manton’s Ranger Rowdies may number no more than 280 students, but they certainly bring the noise, literally, which was immediately obvious. Most of the student body had to be in attendance for the games they filmed.

Similar to finalist Traverse City West, Detroit U-D Jesuit’s section is driven by its student government. A student senate committee is dedicated to making the section (and whoever came up with the wrecking ball deserves a few more votes in the next election).

We know about the strength of Dowagiac’s leadership firsthand after awarding the section the BOTF 2015 championship. They had a lot of leaders showing the way last year, and that appeared to be true again – a favorite part was a line of students arm-in-arm in the front row, facing the rest of the section during a back-and-forth cheer. And the The Attack's chant shown below always will be a favorite.

Tawas’ Brave Cave is full of ideas, starting with in-game interviews of students during an application “broadcast” by TSPN (Tawas Sports Programming Network). Tawas Proud, indeed, and for good reason.

Even if the “D” was upside-down at first on the line of placards spelling out the school’s name in the back row (which was funny), Wayland brought plenty to join the discussion of possible finalists. The “Den” was filled with costumes, signs, and just a lot of material that surely makes for a fun night.

For starters, Pontiac Notre Dame’s name – Irish Thunder – just sounds powerful. It was hard to tell what was going on as part of the “Whistle Cheer,” but it looked pretty wild, especially in front of what appeared to be a giant pep rally crowd (See below).

Walled Lake Western’s video included interviews with parents and basketball players as well, and one of the athletes said something that especially stuck out: “They cheer the other team and us on.” That’s taking inclusion to another level, and we applaud it.

Holland’s Dutch Nation leaders take getting everyone involved to the highest level, incorporating the pep band and cheerleaders during games and the athletic director and many others at the school behind the scenes. As one said, “We work to spread participation not only for the students, but the whole community.”

Imlay City’s Spartan Nation made shirts like many student sections, but didn’t reserve them for high school students alone – they made them for elementary and middle schoolers and sold to the greater community as well in an effort to get everyone together. (And bringing in Santa Claus for a Christmas-themed game for the younger kids was a neat idea too.)

Ending on one last strong note, we hope Norway is just beginning its BOTF quest. #UKNIGHTED might be the best campaign of BOTF V. They’re “all knights and all united,” and set a great example of getting a community together.

Click to watch all 22 application videos for this year's Battle of the Fans V.