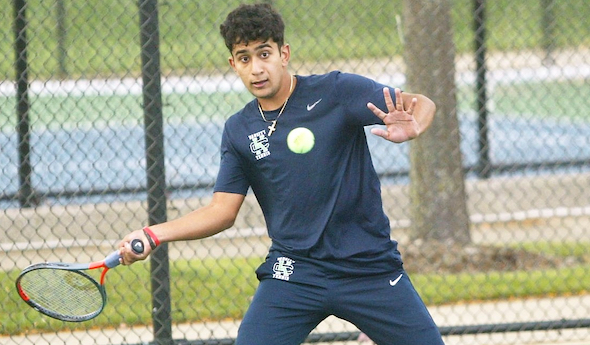 By Jarred Chrapek
Special for Second Half

That laser-focused approach proved to be spot on as the Cranes outlasted reigning champion Ann Arbor Greenhills to capture this season’s championship at Holland Christian.

The two teams split the eight matches in the final 4-4, with the tie-breaker total sets won. Cranbrook Kingswood had one more set to its advantage.

And not just every set, but every game could've carried additional significance. Had the teams tied for number of sets won, the Cranes also would've won the next tie-breaker – most games won within those sets.

“We knew it was going to be close,” said Cranbrook Kingswood coach Steve Herdoiza. “We knew that every point mattered, especially with this format.”

Unlike previous years, where the team champion was determined by how many matches individual players won during bracketed flight play, this year’s format was a pure team, head-to-head dual as the COVID-19 virus changed the way not only the tennis season was run but the way the MHSAA Tournament was set up.

This year’s title came down to a rematch between the two powers in Division 3 the past several years. Cranbrook Kingswood had won four straight Finals titles before Ann Arbor Greenhills snapped the streak last year. The two teams met three times this fall, tying 4-4 each time with Cranbrook winning twice on tie-breakers and Greenhills winning by tie-breaker the other time.

“Both teams knew it was likely to come down to total games won, or maybe sets. Cranbrook was deeper and won the lower flights by decisive margins, while Greenhills was stronger at the top, winning those matches,” Greenhills coach Eric Gajar said. “In the new format, it still came down to a total team effort, and Cranbrook was better (Friday) – they deserved to win. We will learn from it, and be stronger for having come through it. I know it will motivate the players to work hard this offseason, and they will come back ready for another shot."

This time, Cranbrook Kingswood junior Patrick Tiwari helped provide the tie-breaking set as he pushed his No. 2 singles match to three despite falling 7-5, 3-6, 6-3.

Tiwari, however, did his part for the team as he won the middle set in what was the final match of the day that ended just as darkness was falling on the courts.

“(The same opponent) defeated me pretty good in two sets earlier this season,” Tiwari said. “It felt good to win that second set and help to clinch the title. Winning that set to clinch the title for us was one of the best feelings I’ve ever had. The whole season was definitely weird, and to regain the state title was a great feeling.”

Just minutes before Tiwari’s match concluded, Cranbrook Kingswood senior Geoffrey Qin won his at No. 4 singles to give the Cranes their fourth victory of the dual. For the undefeated Qin, the victory was part of a total-team effort that started even before the season began.

“Winning this state title required so much effort by everyone,” Qin said. “It started back in August when we had COVID cases at our school. Not only did we have to work hard on our tennis and our conditioning, but we had to be diligent with the virus and practice good social distancing.”

The team also had to remain focused on preparing for every match, as lessons learned while coming up short at last year’s Final proved valuable this time around. 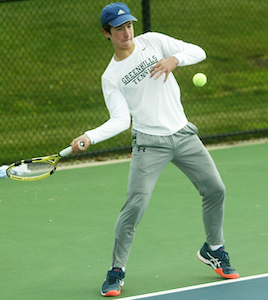 “We had some guys cramp up at last year’s state finals including myself,” Qin said. “We had to make sure that we kept hydrated and did proper stretching before matches this year to prevent cramping up. You learn lessons from defeat that you don’t learn by winning. That was an important lesson we learned last year, and I don’t think we would’ve won this year’s state title without learning those lessons.”

“We had four seniors this year and some very good leadership from our captains,” Herdoiza said. “We also had some freshmen step up along with some sophomores and juniors.

“We knew it was going to be a battle with Greenhills. We are two evenly-matched teams, and it came down to one set. Today we just took advantage of the opportunities given to us.”

Cranbrook Kingswood received some strong efforts from its doubles teams. The Cranes won three of the four doubles matches, led by the No. 2 pair Martella and Theo Taubman, who claimed a 7-5, 6-1 win.

“Our team goal was to peak for states,” Martella said. “This was a really difficult season with the COVID and everything, but we just kept getting better every week.”

The total team effort proved to be the key for Cranbrook Kingswood in the end.

“Everyone on the team played very well the entire tournament, especially at the end,” Nagaraju said. “Patrick at two singles exceeded expectations. We just kept on battling this year and overcoming numerous setbacks. We developed into a real team, and that was the difference. We just trusted the process.”

Greenhills claimed the No. 1 doubles match with Joey Formicola and Thomas Zeng winning 6-1, 6-3.

“I was particularly pleased with my top three singles players – all of whom won their matches in the final. Between them, they had only one loss all season long despite a brutal schedule against top competition,” Gajar said. “My one doubles team had a great tournament, including avenging a regular-season loss in the semifinal round, then played lights out in the finals, defeating a solid team.

“There are lots of teams that would have loved to be in our position and playing for a title in their last match. We did well to get there and came up just short. I am proud of how my guys competed and handled themselves. Of course, we were thrilled to have had a season at all; that wasn't always a sure thing. Hard to believe it's over.”