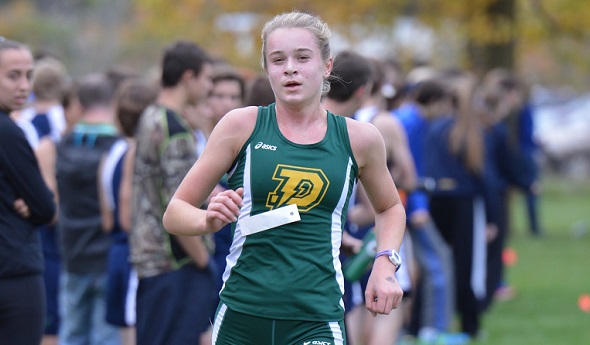 In her second meet, she won the Lancer Invitational in Midland with a time of 18:37.7.

Before her third meet, she went to the doctor, because she didn’t feel right while running in the previous two.

There she received a diagnosis that wasn’t pleasant, but also could be what vaults her to the type of season she knows she’s capable of having.

“I was kind of disappointed with how I was doing at the very beginning of the season,” Jensen said. “But I just focused on running for my team and not getting down on myself. I was going to keep working and hoping my times would eventually come.

“Then I got my iron tested and found out my ferritin levels were low. It’s not a good thing, but finding out that I did have low ferritin was a relief, because it was an explanation for why I was running poorly.”

Poorly, of course, is a relative term. If the 18:09.9 from her first meet was still her season’s best, Jensen would rank as the 17th fastest runner in the state this year, all divisions.

But Jensen is used to going even faster.

Ferritin is a blood cell protein that contains iron, and a low ferritin level indicates there is an iron deficiency. Fatigue is a major symptom of an iron deficiency, and Jensen's mother noticed during those early races that her daughter didn't seem to have the same type of endurance she once did. Now that it's being treated, and her levels are coming back to a normal level, her times are more in line with what she expects from herself.

In each of her last three races, she has broken the 18-minute mark. At the Heritage Invitational on Oct. 8, she ran 17:40.7, which has her ranked seventh in the state.

“She handled it better than I would have expected,” Jensen’s mom, Lara, said. “She didn’t get upset. She was a good sport and she always ran hard and always tried to do whatever she could for her team. I was thrilled and I was pleased because she didn’t get down on herself.

“I could tell when she was running that she wasn’t right, because I could tell she was struggling to catch her breath. Now she looks much more like I’m used to.”

Jensen has been turning heads on tracks and 5K courses since well before she put on a Dow uniform. 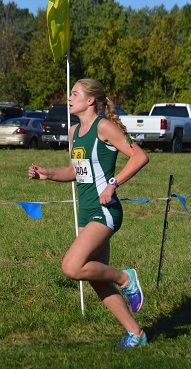 As an 11-year-old, she won the women’s division and placed fourth overall out of nearly 1,500 competitors in the Dow Run/Walk. The next year, she ran 17:18 to repeat as women’s division champion, and took second overall.

Following Dow’s 2015 Division 1 Regional meet, she ran in an open race on the course and recorded a time that would have won had she run with the high schoolers.

Midland Dow coach Jed Hopfensberger has had some fast runners come through his program over 16 years. But anyone like this?

“Not this fast,” he said. “I have a school record based on who runs the fastest time at the state meet, and that’s 18:09. We’ve had some pretty good kids, too.”

So what’s the secret? Besides a good amount of natural foot speed and the time she’s put in, it’s Jensen’s other sport, swimming, that may have contributed the most to her success.

“My guess is it’s because swimmers develop pretty good lung capacity, so part of it is that fitness level, having that lung capacity,” Lara Jensen said. “You’re working really hard and doing it for hours. Also, I think swimming is good overall conditioning for your whole body with very low impact.”

Lara Jensen swam for two years at Purdue University, and said the family had Anna in the pool at a young age swimming competitively. She’s good at that, too, but the decision to run cross country rather than swim this fall at Dow wasn’t as difficult as the Jensens thought it might be.

“It seemed like it would be a tougher decision before the track season had started,” Anna Jensen said. “I had a lot of success in the winter in indoor track and I just kind of knew that running was my passion. I love swimming, but running was the thing I love to do the most. It’s such a stress reliever. I love everything about running, and that’s what I knew I wanted to do in high school.

“I will actually be swimming for my boys high school team this winter, so that’s going to be really fun.”

Jensen will compete with a strong Dow team Saturday at the Division 1 Regional meet at Delta College. Dow enters as the favorite based on simulations by Athletic.net. According to those, teammates Maija Rettelle, Emily Wall and Anastasia Tucker join Jensen to give Dow four of the top five runners at the meet.

The MHSAA Lower Peninsula Finals will be held Nov. 5 at Michigan International Speedway in Brooklyn.

As she still has yet to qualify for that meet, looking too deep into the future may seem premature. But Jensen’s times already make her a Division I college prospect. While coaches can’t directly contact her yet, they’ve made it known to others that they’re interested.

“I would love to be in a position where I could get some scholarship money to run for a Division I college,” she said. “Depending on how fast I can get, I would love to run after college, maybe professionally.”

PHOTOS: (Top) Midland Dow's Anna Jensen runs through a fan-packed stretch during a cross country race this fall. (Middle) Jensen passes a flag during one of her races. (Photos by Craig Adams.)