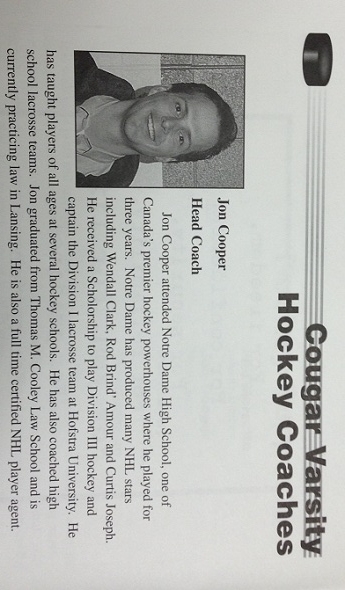 This week in the year 2000, Jon Cooper had just finished his first season coaching at any level, having guided the Lansing Catholic hockey team to its first Regional championship in 25 seasons.

It would be the only season Cooper – a local lawyer and former player at Hofstra – would coach the Cougars. But it also was the start of a nearly unimaginable rise that saw him hired to coach the NHL’s Tampa Bay Lightning two weeks ago.

As the saying goes, it couldn't have happened to a nicer guy. Cooper always was friendly and helpful to this then just-starting local media member, and despite his lone season coaching the Cougars quickly built a local fan base that continues to cheer him on from afar.

An NHL.com piece last week led with the high school angle. Click here to check it out. He took over a team 16-18-2 and near the bottom of the Eastern Conference, but Cooper surely will have plenty rooting him on from the MHSAA hockey ranks as he works to bring the franchise back to the playoffs – and we’ll work to catch up with him this summer during his first NHL offseason. 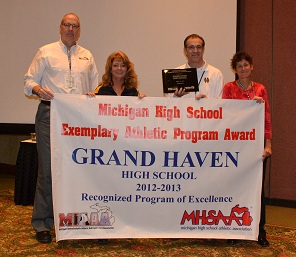 The program was established in 1998 to recognize outstanding athletic programs and give high school administrators a vehicle by which to self-assess their practices and measure improvements.

Characteristics of “exemplary” programs include district-wide commitment, excellence in advancing the growth of well-rounded participants and serving the needs of all involved including parents and staff, and sustained success in teaching the values of high school athletics.

Click for more details on award criteria and a list of previous winners, and additional coverage by Grand Rapids’ WZZM.

Few if any schools in Michigan have done more work in researching and identifying the trophies in its case than Orchard Lake St. Mary’s, which will celebrate its 100th season of boys basketball in 2013-14.

It's rare the Eaglets historians can’t determine what a trophy celebrated. In this case, hopefully you can help.

We believe it’s a basketball trophy from the 1930s – but haven’t been able to pin down a season or a level of the MHSAA tournament. A few things that make this one unique are the plaque presentation, as opposed to a standard trophy, and the large MHSAA seal in the center. Any ideas? Email me at Geoff@mhsaa.com.

Giving back to those who gave

Dexter track coaches Bob and Katie Jazwinski are remembering those who helped them rebuild after their home was destroyed by the storm.

In a Second Half report last year, Bob Jazwinski said he’d seen athletes and coaches from Adrian, Ann Arbor Pioneer, Pinckney, Chelsea, Ann Arbor Skyline, Whitmore Lake and the USA junior hockey team among the many who flocked to the community to lend a hand in the cleanup.

The Jazwinskis began repaying the favor three weeks ago on the storm's one-year anniversary with the Dexter F 3.1 Tornado Run/Walk that benefited non-profit organizations that had donated for storm recovery the year before.

Click to read the March 30, 2012 story about Adrian athletes’ contributions to the clean-up.

We got off to a late start on entering basketball schedules for this winter – but thanks to some incredibly helpful school, official and fan inputters, we were able to catch up quickly and finish with a nearly-complete list of results and standings for this season.

Still, there are some schools with incomplete schedules or a few scores missing. And before everyone forgets completely about this season, we’re hoping for a little help in finishing this enormous task.

Please check out your team’s page on MHSAA.com and help us fill in missing scores and fix inaccuracies. The latter could include just about anything – an incorrect game date, incorrect opponent or score, team missing from league standings, etc. For corrections, please email me directly at Geoff@mhsaa.com. (Note: If a game was cancelled, don’t just delete it – contact me and I’ll add “cancelled” to avoid confusion.)

Why is this important? Two big reasons. First, MHSAA.com publishes the most complete statewide scoreboard with results from every corner of Michigan. And we have the most complete archive of basketball seasons available, currently dating to 2009-10. Help us fill in the blanks, and they’ll be saved for everyone’s benefit for years to come.

I thank you in advance for any help you are able to provide.