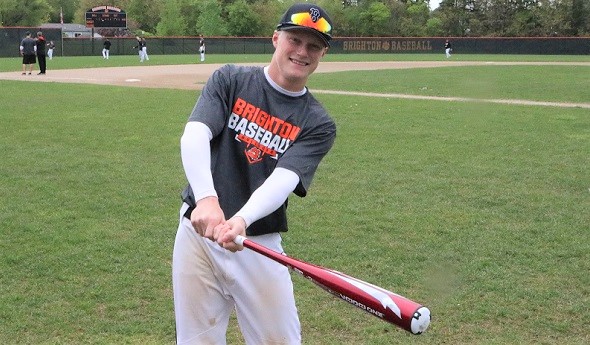 Zach Hopman has heard of Drew Henson, of course.

You can’t play for Brighton and not see Henson’s list of accomplishments during a stellar baseball career at Brighton a generation ago.

But Hopman, a left-handed hitter who plays right field and pitches for the Bulldogs, didn’t know until after he hit four home runs during a doubleheader May 21 that he was within shouting distance of Henson’s Brighton school record for home runs in a season.

The four homers Hopman hit on a cold, blustery day during a sweep of Ann Arbor Pioneer gave him 18 for the season, putting him within reach of the Brighton mark of 23, set during Henson’s junior year in 1997.

Only six players in state history have hit more homers in one season. Zach Fish of Richland Gull Lake set the record with 24 in 2011.

“The ball jumped off his bat in a way it doesn’t for a lot of guys,” Brighton coach Charlie Christner said. “It just takes off, and he’s been driving a lot of baseballs this season, and not just to right, but to all fields. It used to be that it was all pull, but this year he’s hitting gap to gap and driving the ball to right field.”

Hopman had six homers last season for the Bulldogs, but noticed an uptick in his power during summer ball.

He spent the winter working out with teammate Jack Krause when not participating in team offseason workouts.

“We would hit with the team twice a week,” Hopman said. “Jack and I would go every weekend, twice a weekend, to go hit at the Legacy Center. Sometimes when we got dismissed from school early, we would go and hit.”

That part of the routine has paid off, to be sure, but Hopman says he’s improved his approach at the plate, too. 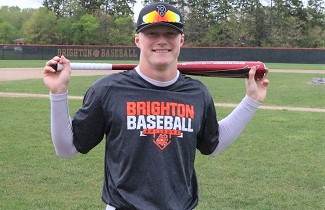 “I think I’m seeing the ball a lot better,” he said. ‘I’m more selective with my pitches. That was a problem last year. I had trouble reading pitchers out of the pitcher’s hand. I think my swing is the same, but I haven’t really watched it to make a comparison.”

Hopman, who hits third for the Bulldogs, is part of the best hitting team (averaging .360 as a squad) in Christner’s seven seasons as Brighton coach.

Hopman’s average has been around .500 all season, and his power numbers also have gotten him attention.

In that doubleheader against Pioneer, Hopman was 7-for-8 with the four homers and a triple. But a single proved memorable, too.

“My bat broke on one of my singles,” he said, grinning. “The knob fell off, and my hand was stinging for a solid inning.”

He’s not so bad on the mound, either. He pitched two innings of relief that Monday, with all six outs coming via strikeouts.

“They’ve been really supportive,” Zach said. “They come with me to hit at the high school on weekends, and they come to my games. It’s really nice that they’re here.”

His approach at the plate has been straightforward.
“I try to think middle,” he said. “A line drive up the middle. I don’t think about home runs, because then I’ll have a bad swing. I’m not trying to pull the ball any more. I don’t want to get into the home-run mentality.”

In other words, if the record comes, it comes.

And if it doesn’t, it still has been a senior season to remember for Zach Hopman.

PHOTOS: Brighton’s Zach Hopman has sharpened his swing to make a run at his school’s home run record set by Drew Henson. (Photos by Tim Robinson.)