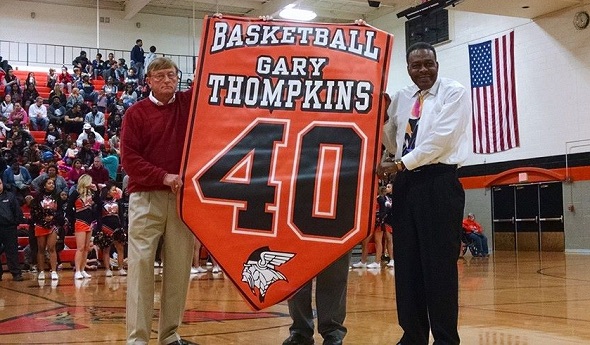 JACKSON – More than 30 years ago, Gary Thompkins moved away from Jackson after his high school days. But he never really left home.

He thought about leaving the sun and warmth of his Arizona home and coming back to Jackson, hopefully to coach the basketball team at his alma mater, Jackson High School. His son Zeke wanted to play at the same school as his father, and Gary's dream job was to coach the Vikings.

While the coaching move wasn't in the cards at that time, Thompkins did return this summer to host a youth basketball camp at the old gym at his high school. He hoped it would become an annual event, and he planned to return again this month when his number would be retired.

On Sept. 3, less than a month after the camp and just 12 days shy of his 51st birthday, Thompkins died of a massive heart attack in Phoenix.

“It's just how life works,” said Jack Fairly, athletic director at Jackson. “He came home and ran that camp and a few weeks later he has a heart attack. Immediately you wish you would have retired his number sooner, but how do you know?

“It's a learning thing, too. Don't wait sometimes to tell people what you want them to know.”

The shocking news traveled through Jackson and his Thompkins’ friends like a lightning bolt. At his service in Jackson, one speaker said, “Growing up, we knew about Tony Dungy. We knew who the best football player was to come out of Jackson, but he was older than us and we didn't know him that well. When it came to basketball, we had Gary. Gary was our Tony Dungy.”

It seemed most everyone agreed, and in 2002, the Jackson Citizen Patriot named Thompkins the best high school basketball player in Jackson County history.

“He's the best player I ever coached, and it's not even close,” said Andy Sheridan, who coached Thompkins in high school.

Tuesday night, Jackson High School fulfilled its plan to retire Gary's No. 40 in a heartwarming, emotional ceremony. Gary's father, Bobby Thompkins, and Sheridan were on the court to reveal the banner as Gary joined his father and Regina Pierce as the only Jackson High School basketball players to have their numbers retired.

In the 1960s, Bobby Thompkins was the top basketball player in Jackson, and up until Tuesday night, he was the only male basketball player to have his number retired at Jackson High – a school that won Class A titles in 1948 and 1955.

“Bobby really pushed Gary and worked with him,” Sheridan said. “Bobby really wanted him to play, and that was a good thing.

“The thing is, though, if a kid doesn't want to play, he isn't going to play. I've had kids who had talent but didn't have the desire. Gary wanted to play all the time. If I could have opened that gym up 24 hours a day, he would have been in there 24 hours a day.” 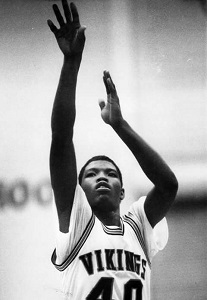 Bobby Thompkins was an inside player, and Gary was a point guard who could do it all. There were not many similarities.

“Gary could go out and shoot it from 15, 20, 25 feet, and I was anywhere from 14 to 15 feet in, so I always played inside while Gary was outside,” Bobby Thompkins said. “But that was one of the things that Andy and I talked about as he grew up.

“It was to his advantage and his future for him to be able to handle the ball and play outside, and that is the way Andy coached him.”

It could not have been easy playing basketball in Jackson with the last name of Thompkins. But Gary embraced it. He was proud of his father but wanted to be better. He played with a swagger and had a flair for the dramatic. He was good, and he knew it. But off the court, he came off as just another guy.

“In 1984, his senior year, I was just back out of college, and I was substitute teaching,” Fairly said. “He gave me the time of day, and I was like some guy he didn't need to know. He was everything to us. He was our Mr. Basketball.

“The impressive thing is that he took the time to talk to me and get to know me. He shook my hand and introduced himself to me and made me part of what was going on with him just by being polite. Not every great star does that, and I think that spoke volumes about his character. So you root for a guy like that.”

Having Sheridan as his coach was a perfect match, too. Sheridan and Bobby Thompkins had been teammates on some fine basketball teams at Spring Arbor College and maintained their friendship throughout the years. Gary attended Jackson Catholic Middle School, but when it came time to choose a high school, he went to a public school for one important reason.

“Bobby called me and said, 'If you're going to be the coach, Gary is going to be at Jackson High,'” Sheridan said.

In Gary's senior season, Jackson won a Class A District title and won a game in the Regional tournament for the first time since 1969 before losing in the Regional Final. Thompkins left Jackson High with several impressive accomplishments: He finished second in the voting for Mr. Basketball – the highest finish ever for a Jackson County player – and was a two-time Class A all-state first-team selection and a four-year varsity player.

In the annual state high school all-star game that year, Gary was voted the Most Valuable Player. On Father's Day.

He was heavily recruited by former University of Michigan coach Johnny Orr and played for Orr at Iowa State, where he teamed with another Michigan high school star – Flint Northwestern’s Jeff Grayer – and helped the Cyclones return to the NCAA Tournament for just the second time since 1944.

Perhaps the highlight was Iowa State's 72-69 second-round victory over Michigan in 1986 – a game that Orr called “my biggest victory.”

In four seasons at Iowa State, Thompkins had 900 points and 600 assists. He lived up to the hype.

After giving pro basketball a shot, Thompkins settled into a coaching and teaching role. He was a special-needs instructor and basketball coach at Greenway High School in Phoenix, and he was fondly known as “Coach G.”

Basketball wasn't his only focus, but it always was a passion.

Not surprisingly, Thompkins' two step-sons are gifted in basketball. His oldest step-son, Sammy Barnes-Thompkins, played as a freshman last season at Boston College before transferring to Odessa College in Texas this winter to get more playing time. 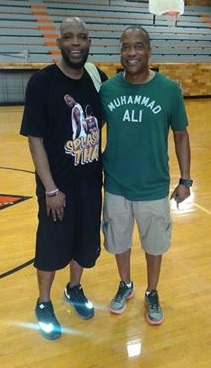 The younger step-son is Zeke Thompkins, a freshman at Greenway High School in Phoenix who already is catching the eye of college coaches. And it is Zeke who had a dream to one day play basketball at Jackson High – his father's school.

A few years ago, Thompkins considered moving back to Jackson to coach the Vikings and give Zeke the chance to play there. Although the job likely would have been his had he wanted, things didn't match up. But it remained a dream.

“What they did in Arizona was make him a permanent sub, and being that he was a permanent sub, he automatically could coach and support his family,” Bobby Thompkins said. “That was one of the pieces that I think was missing in regards to coming home, but he wanted his kids to play here and wanted to coach here.”

It was with a ton of pride that Gary returned to Jackson on Aug. 13 to hold a shooting camp at Jackson High School. It was interesting that instead of holding the camp in the current gym – the one in which he played – he wanted the camp to be held at the cozy old gym that housed the two MHSAA championship teams and is filled with character.

It was his way of giving back and staying in touch with his old school. He had hoped to make it an annual event that would grow in size each year.

“It was a hot day, and Gary did a great job with the kids for us,” said Dan Crowley, Jackson High boys basketball coach. “He was very gracious to everybody.

“He was looking forward to coming back for the first game when his number was retired.”

Instead, the ceremony went on without Gary. It was heartbreaking and uplifting at the same time, especially for his family.

“The way in which I’m dealing with it is that it's an opportunity to do something for a young man who was successful,” Bobby Thompkins said. “I have to thank the school district and also thank Andy and Jack, who also have promoted this, and at the same time, this might give an opportunity for others to have the opportunity to have their numbers retired. It would be great for their families.

“Also, it's a positive reinforcement for our community, giving honor and respect that is needed for those who were successful.”

Gary Thompkins left a legacy in Jackson as versatile as his playing skills. He was fierce and confident on the court. He was nice and gracious off it. And he possessed a tremendous love for his family, his sport and his high school that stayed with him until his final days.

He packed a ton of living into his nearly 51 years. It would have been a surprise if he hadn't.