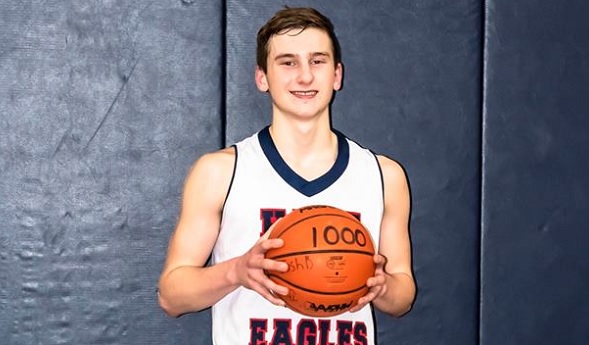 HALE — Joseph Kimmerer’s heart swelled with excitement as he raced toward the basket on a fast break.

The freshman point guard appeared to be destined to record his first points with the Hale varsity boys basketball team on a layup. Unfortunately for Kimmerer, a hard-charging player from Posen rattled him just enough to cause Kimmerer to lose focus for a split second.

“There was somebody coming up behind me and a lot bigger at the time,” said Kimmerer. “I was scared of that, and I was excited for my first points and just blew it.”

Kimmerer has not had much trouble scoring since that miss. In fact, points have come in abundance over the past three years. He finished with 14 in that first game against Posen, reached the 1,000-point club midway through last season, and with a career total of 1,228 points stands just one 3-pointer from becoming the school’s all-time leading scorer — surpassing the record set by Chad Brandt in 1992. His first chance to set the record will come tonight against Rogers City.

Kimmerer’s dad, Joe, has seen Joseph’s scoring prowess up close as the head coach of the Eagles, getting a sideline perspective on his son’s physical and athletic development from being a 3-point marksman as a 5-foot-9 freshman to the complete offensive package now as a 6-foot-2 senior.

“He was a spot-up shooter,” said Joe. “Didn’t like a lot of contact. Always could make free throws but never got to the line much. Now he is a kid that goes to the rim hard, looks for contact, wants contact, wants to go make that three-point play at the free throw line. He’s also gotten to the point where his athleticism and his strength have caught up to the skills he had.”

Joe Kimmerer also understands the magnitude of what his son has done on the basketball court, having been a 1,000-point scorer during his own playing career for Hale as well as a 25-year coaching veteran for Hale’s boys or girls basketball squads since the late 1990s.

“It’s a great accomplishment,” Joe said of his son’s pending school scoring record. “But the accomplishment that I think stands out even beyond that is there has never been a player at our school that has played for four straight league championships. We’re at three in a row now. We’ve got a very good opportunity to put our fourth in the book. That accomplishment might stand out more to me, maybe because I’m the coach. To be able to say you won four league championships. That’s a pretty good honor, and he would be the only one who could say that.”

Joseph is young for his grade, having turned only 17 on Oct. 10, but he’s always done things earlier than most. He got his introduction to the gymnasium as a 2-year-old while his dad conducted practice. When he got old enough to start playing, Joseph could be found shooting off to the side of the gym as Hale’s high school teams played nearby. By the time he was in fourth grade, he was on the court at Hale’s practices, getting a chance to compete against much older junior varsity or varsity players.

Joseph was ready to suit up for the varsity squad when he got to high school. Joe thought so too, but he erred on the side of caution, not wanting it to appear that favoritism was the reason his son earned a varsity roster spot. So Joseph started the year on the junior varsity.

“I thought I could (play at the varsity level) the whole time,” said Joseph. “I just had to prove myself at JV and get the call up. I just believed.”

Joseph was dazzling in his two games with the JV as overmatched opponents struggled to guard him, making it even more obvious the Eagles’ varsity could use his services.

“I knew going into that season that we needed a shooter,” said Joe. “Someone who could score for us on a kickout. We went into our first two games of the year, and we proved as a varsity team that we needed somebody like that. At the JV level he was doing things in those games that the rest of the players could look at and say, ‘We really need that.’ I look back and I wish I would’ve pulled him up and had him part of the varsity for those two games also, but it was also kind of a stepping stone for him, too, to show the guys. When he came up he was second on our team in scoring as a freshman in a year that we won the league and Districts. It kind of stated for itself right there.”

Joseph averaged 12.1 points per game as a freshman, then saw that grow to 18.6 points per game as a sophomore and 25.5 per outing last year as his game continued to blossom. He also managed to lead the Eagles in rebounding from his guard position last season with 11.9 per game and is in line to set the school’s career record in that category as well if he pulls down 125 boards this winter. He had 275 last season. Defensively, Kimmerer always draws the opponents’ top player regardless of size.

“He has a possibility of being a 30-point-a-game guy,” said Joe. “It’s not because he’s going to take 35 shots. It’s just going to come because that’s his game. His speed, his size — everything has increased over this past summer. I think the game might come a little easier than it has in the past even.”

With that kind of year Joseph could reach the 2,000-point plateau, a feat reached by only 41 players in state history.

Joseph set a career high with 40 points in a game against Mio last year. However, the Thunderbolts have been a thorn in the Eagles’ side the last two postseasons, including handing Hale a 51-49 loss in last year’s District championship game.

“We split with them both years in the regular season, but once it gets District time it just doesn’t go our way,” said Joseph.

Besides being a stellar basketball player, Joseph is also a model citizen and student. He has a 3.8 grade point average, is part of the National Honor Society and can often be found in the gym mentoring kids in the Little Eagles youth program. It’s just Joseph’s way of giving back to a community that has taken a keen interest in the Eagles boys basketball team.

“We’re packing the gym every night,” said Joe. “People in the community who have no connection to the team are traveling to away games. We’ve got people in the stands at scrimmages, and it’s not just because of him. Our team is strong, and people have kind of latched on. They like the brand of basketball we’re playing. (Joseph) involves everybody in it. Guys who are on that (1,000 point) scoring list are making it back to games. They haven’t been back in the gym in 20 or 25 years or longer and they were at his game because they want to see him do it. I feel that’s going to happen here when we go to Rogers City. ... We’re going to get that group of people who really don’t have a connection, other than they played in the past, were on that list, or like basketball. They’re going to be there because of what we’re doing with three straight league championships, and he’s a big part of that.”

Chris Dobrowolski has covered northern Lower Peninsula sports since 1999 at the Ogemaw County Herald, Alpena News, Traverse City Record-Eagle and currently as sports editor at the Antrim Kalkaska Review since 2016.