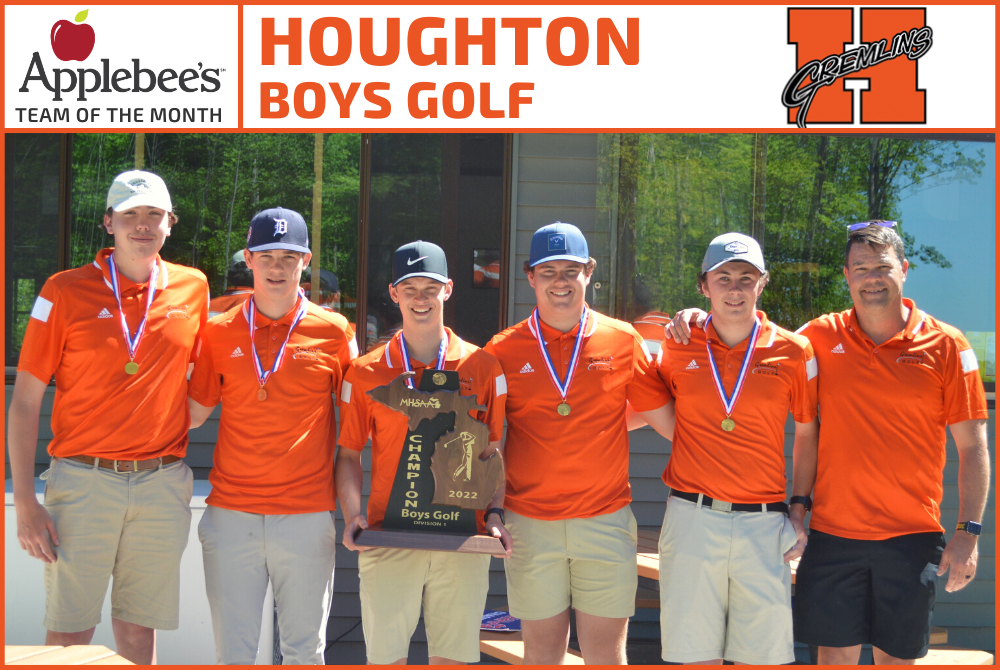 The Houghton boys golf team won its 10th Finals championship this season, and sixth Upper Peninsula Division 1 title over the last 10 seasons. Two of those other four seasons, the Gremlins finished runners-up. With a run like that, more success isn't going to surprise anyone.

But this spring’s team exceeded expectations.

The outdoor portion of Houghton’s boys golf season lasted about five weeks. The Gremlins’ home course, Portage Lake, opened May 9, and the team’s first outdoor practice was that day. But by June 1, the Gremlins were shooting in the 320s as a team and clinching another Division 1 title – earning the MHSAA/Applebee’s “Team of the Month” honor for May with that first day of June an exclamation mark on another fantastic season.

“Some of our other teams have had more golf talent. But these guys have worked hard and gotten better and better and kept improving and exceeded expectations a little bit,” said Houghton coach Corey Markham, who also leads the perennially state-contending hockey program. “It’s an awesome group.”

After finishing UPD1 runner-up and five strokes back of champion Marquette in 2021, Houghton took back the top spot this time shooting a 329 at Sage Run to edge Marquette by five strokes. Sophomore Marino Pisani (78) and junior Camden Markham (83) finished second and tied for eighth, respectively, in the individual standings. Juniors Cooper Leonard (84) and Ryan Schmierer (84), and senior Ryan Vlahos (85) – who also was back from the 2021 group – rounded out the winning lineup.

Corey Markham noted how his three returnees helped the lineup find more consistency this season. Marino dropping his scores into the 70s also was a big plus. “He puts in the most time and just lives golf,” Markham said.

Boys golf teams in Michigan could begin practice March 14 and competition March 21. The Upper Peninsula as a whole, due to winter weather, generally gets going later – but Markham said teams in the southern U.P. have even a two or three-week head start on those at the northern tip of the peninsula.

Markham called what his team can do with practice over that first month “minimal” – for obvious reasons – and also as it shares indoor space with the softball and baseball teams also waiting for the weather to turn. The golf team does some work on rules and with video, and uses a simulator to bring back some of the muscle memory from the previous summer.

The Gremlins played in two tournaments during the last week of April – nearly two weeks before that first outdoor practice. They finished third in both of those events and in another May 10 the day after they’d finally gotten outside. But soon after the run started, and Houghton clinched the Western Peninsula Athletic Conference championship on the way to finishing with another Finals title.

“Our biggest success is due to our junior program at our golf course,” Markham said. “You get kids out, and they play a lot in the summer. Their basics and their background are the reasons they’re able to step in and start doing well with a short season.”