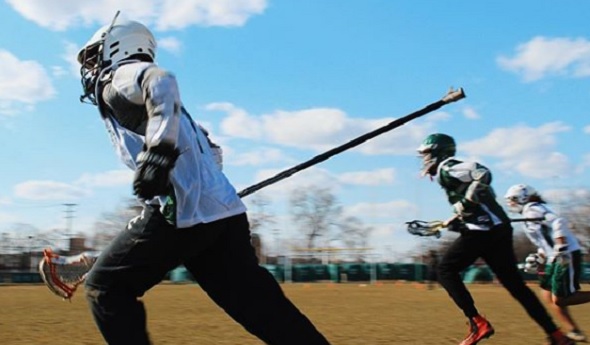 DETROIT – Liam McIlroy never thought of himself as a trailblazer in the sport of lacrosse. Though he played lacrosse in high school at Grosse Pointe South, earning all-state honors as a junior, McIlroy also played football for the Blue Devils and, later, in college at Denison University in Ohio.

Yet McIlroy and his lacrosse team broke barriers this spring at a school known statewide for its prowess in football and basketball.

Detroit U-D Jesuit, a member of the Detroit Catholic League, is the only other school within the city limits that has a boys lacrosse program.

Athletic standards are significant at Cass Tech. The football program won MHSAA Division 1 titles in 2011, 2012 and 2016, and lost in the Final in 2015. The boys basketball program, most recently, won PSL titles in 2017 and this past season.

“I’m loving it,” McIlroy said. “It’s a grind. You have to remind yourself that it’s more than a game. We’re excited lacrosse is an option (at Cass Tech).

“Our goal, initially, was to find our identity, as the first team in Cass Tech history. Our slogan before the season was ‘day by day.’ (The players) realize they weren’t going to be the best team in the state.

“There are high expectations here. Football is huge at this school. The slogan for the football players here is ‘second to none.’ It’s a great institution. There’s no free pass at Cass Tech (academically). There’s a lot of work to be put in. In lacrosse there’s a lot of work to be put in. To me, it’s about work ethic. It’s a sport that has adopted a suburban culture. For the most part, people are excited to have a team. We’ve received support from the community and from the other teams we’ve played. Some have offered us equipment, advice and generally just anything they can do to help.”

McIlroy has 25 players in the program, 20 who play regularly. There’s one senior, eight juniors and four who have played football including two freshmen and a sophomore.

The learning curve has been steep. Though some have competed in youth leagues, most notably Detroit Youth Lacrosse – which supports three age groups: third and fourth grades, fifth and sixth grades and seventh and eighth grades. It has a website (www.detroitlacrosse.org) but, like Cass Tech’s program, is in its infancy. This is just its second season, and McIlroy is one of its co-founders.

It is his association with this youth league that steered McIlroy to Cass Tech.

“I’ve done personal training and coached youth leagues, but this is my first year as (a) head coach,” McIlroy said. “I try to use other sports as a reference, football and others. I’ve kind of honed my style. I played hockey when I was younger, and football (provided) a better opportunity for me to play in college. I’ve always had a special place in my heart for lacrosse.”

Perhaps the program at Cass Tech is simply a natural progression from what McIlroy helped to start with Detroit Youth Lacrosse. Parents began showing interest in having a team at the high school level and inquired of both McIlroy and Cass Tech’s administrators.

Steve Hall is the varsity boys basketball coach at Cass Tech and shares the athletic director duties with Thomas Wilcher, Cass Tech’s varsity football coach. Answering those inquiries, Hall and others acted. Rather quickly, a team was formed. To Hall and other administrators, the questions they asked themselves were, “Why not? Why can’t lacrosse become a part of the Cass Tech community?”

“In my position, you try to accommodate the interests of more kids,” Hall said. “With lacrosse, we’re able to provide another sport, another avenue. We’re providing kids another vehicle.

“It broadens our horizons. It’s another opportunity. We’ve had some games with some great programs and there are some suburban schools who have B teams and, when there’s the opportunity, we can play those teams. 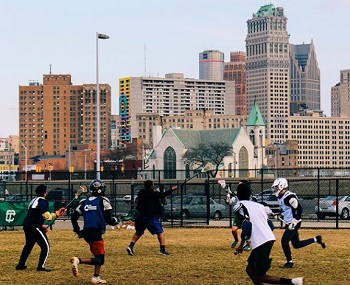 “We’re in our infancy. I will stand on the sideline, we played (Madison Heights) Bishop Foley one game and it was like, ‘Wow! I’m at a Cass Tech lacrosse game. This is great.’ It’s great that we can be pioneers in the PSL. The bottom line is, we can possibly enhance the high school experience. I’ve seen a percentage of students who have been impacted positively by this. It can only open their minds.”

Aaron Stunson is not unlike many of McIlroy’s lacrosse players. Stunson played lacrosse with friends in pickup games but never competitively before this season. He worked his way into the starting lineup, first as a goal keeper and now as a midfielder, and was named captain.

Stunson played soccer as a freshman, but his interest in the sport waned and he’s thankful this opportunity arose.

“I always liked the sport,” he said. “I was curious how I would fare on a competitive team.

Cass Tech is 2-8 heading into the MHSAA Tournament, and Stunson and McIlroy agree they have seen improvement. Stunson singled out games with Grosse Pointe South as examples. South dominated the first winning 14-1 and also won the second, 12-1, but Stunson said his team was better prepared the second time around.

“The people in the crowd said we’d played much better,” he said. “My parents and other people told me that.”

Baby steps, certainly, but positive steps are being made. McIlroy said the Technicians’ first victory, 9-5 over St. Clair Shores Lake Shore, did much for his team’s self-assurance.

“They believed they had a place in the sport,” he said. “Building upon little victories helps with confidence. Our next challenge is if we can stay competitive and win games we’re not expected to win.”

On that note, Cass Tech’s next game is Friday at Birmingham Brother Rice in a Division 1 Regional opener. Brother Rice is the standard-bearer in the sport having won the first 13 Division 1 titles before losing to Detroit Catholic Central in last season’s championship game, 11-10.

McIlroy said he’s excited about the challenge, and he’s happy that his players are excited.

“We’re going to show what we’re made of,” Stunson said.

PHOTOS: (Top) Detroit Cass Tech lacrosse players work out during a practice this season. (Middle) With the city's skyline overlooking them, the Technicians train during their first season as a program. (Photos courtesy of the Detroit Cass Tech boys lacrosse program.)